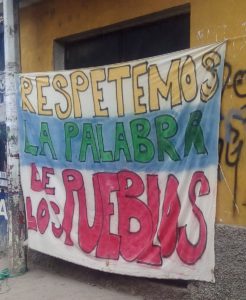 “Let’s respect the word of the people.”

Original statement in Spanish below.

The communities, witnesses, and all of the victims of the Ixil genocide say to the whole world:

In the year 2013, a genocide trial was carried out in Guatemala, where Efraín Ríos Montt and José Rodríguez Sánchez were prosecuted. On May 10th of that year, a court for high-risk crimes emitted an unprecedented sentence and ruled that IN GUATEMALA, YES, THERE WAS GENOCIDE.

Days later, three magistrates of the Constitutional Court – Maldonado Aguirre, Pérez Aguilera, and Molina Barreto – changed that sentence in order to satisfy the business sector and a corrupt government that now finds itself in prison, ruling that the trial had to be repeated.

Nonetheless, as victims and witnesses in the Ixil genocide case, we decided to subject ourselves to a new trial in order to say to these people that we are not afraid to repeat what we already testified to in court. We want to ensure that what we have lived through and suffered is not repeated and that there is JUSTICE.

From February 6-9, 2018, hearings were held to listen to the victims and testimonies of the people who, due to difficulties, could not get to the capital to testify there. Thanks to the High-Risk Court that traveled here to listen to them and learn the truth, the brave and truthful men and women whose hearts are Ixil have offered their testimonies.

We do not get tired nor will we become tired of speaking the truth and testifying before any court or person that what we say is the truth. Our testimony has been corroborated with documents, exhumations, and expert witnesses that we have brought before the Court.

Our words have substance. We have not come to shout lies. We are Ixiles, peaceful people who have suffered the consequences of an Army who must accept the truth and its responsibility.

In light of the above, we express:

Our gratitude, to the Court, for coming here to hear us and learn the reality of the Ixil people.

We will continue forward forever declaring our truth.

OUR HEART IS IXIL. 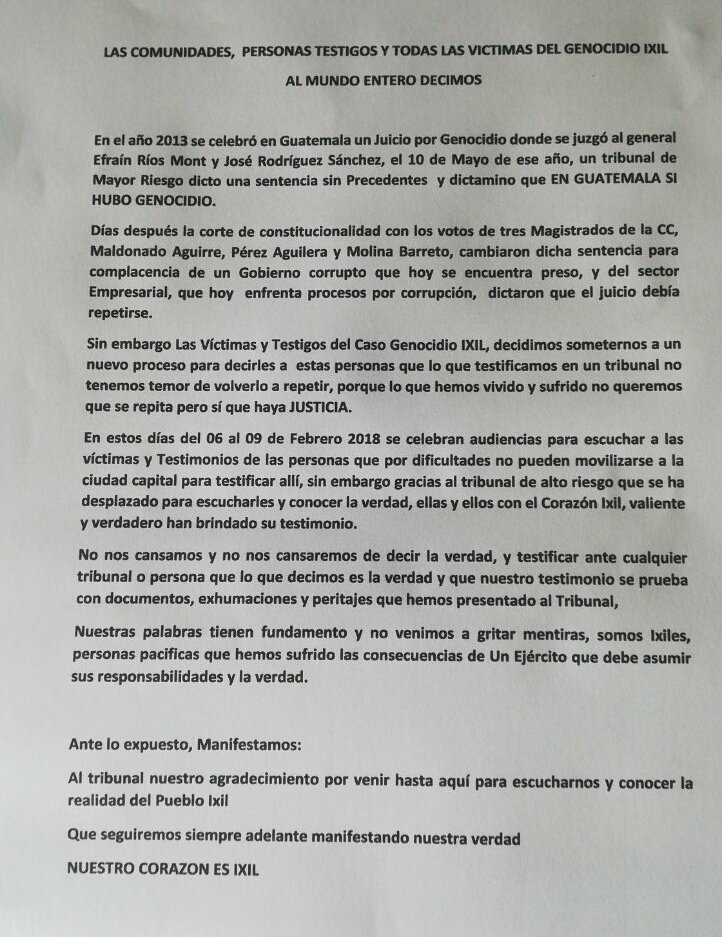 Original statement in Spanish by Ixil survivors of genocide. February 9, 2018.