Communities defend right to clean water, continue to speak out against Tahoe’s dirty mine

In honor of World Environment Day, communities impacted by Tahoe Resources’ Escobal mine did what they have consistently done since the mining company came on to their lands – stand up for land, water and life against mega-development extraction. The situation is critical: just over a year into the start of commercial production at the massive silver mine, water contamination and scarcity is already being reported and confirmed by community members, government officials and environmental organizations. 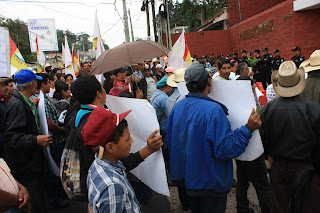 Beneath the rain, over a hundred people gathered outside the Ministry of the Environment and Natural Resources (MARN) to denounce the Initial Environmental Assessment (EAI) for the Juan Bosco exploration license, owned by Tahoe Resources’ subsidiary, Minera San Rafael. Despite widespread resistance to the mine and a 2013 referendum where the community of San Juan Bosco overwhelmingly rejected the presence of the mine, MARN approved the initial assessment in December 2014, putting Tahoe is one step closer to constructing its second mine in the area. Its flagship Escobal project in neighboring San Rafael las Flores began commercial production in January 2014.

Major concerns about the impact the Escobal project is having on the local water supply motivated people from San Juan Bosco and surrounding communities to take legal action to prevent the company’s expansion. A preliminary injunction filed by the Center for Environmental Legal Action (CALAS) against MARN was recently accepted by a Guatemala judge. The complaint centers on the fact that the Juan Bosco EAI is for a low impact project, which is inappropriate for a mining project. The positive decision by the judge means that the approval of the EAI has been temporarily suspended. Nevertheless, community members report that the company continues to purchase land in the area. 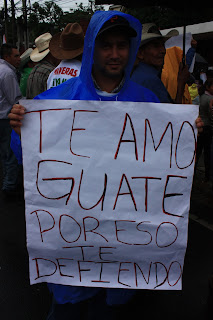 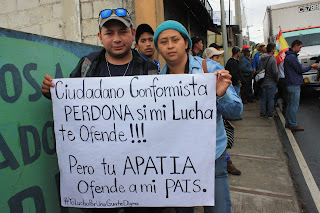 “They call us terrorists. They say our demonstrations are violent. But look around. We’re here, peacefully demanding that MARN stop authorizing these EIAs. We’re talking about our land. This isn’t just our struggle – it should be everyone’s,” said one community member from San Juan Bosco at the protest outside of MARN.
In 2012, CALAS also filed a complaint for contamination of the Escobal Creek and the El Dorado River, located near the community of Los Planes, just steps from Tahoe’s project. The alleged offense occurred while the project was still in the exploration phase. In April of this year, Tahoe’s administrative manager for its Guatemalan subsidiary, Carlos Roberto Morales Monzón, was indicted by a Guatemala judge on charges of industrial contamination and sent to pretrial detention. He was released on bail several weeks later, but remains under house arrest awaiting trial.
The charges in this case were recently backed by a report published by the MadreSelva Collective, an environmental organization that has been monitoring water quality at six points located up and down river from the Escobal mine for the past three years. The report concludes that the monitoring point closest to the mine on the Escobal Creek is the site of water discharges from underground mine operations and contains high concentrations of chemical elements and potentially toxic metals, which present serious implications for the health of residents, their crops and animals. It also documents the drying up of at least 18 wells in communities within the municipality of San Rafael las Flores, were the mine is located.
Those gathered outside MARN also highlighted the 250 complaints related to concerns over water that were filed against the Escobal project before the Ministry of Energy and Mines (MEM) granted the exploitation license. Even thought Guatemalan law states that all complaints must be resolved before the exploitation license can be granted, all 250 were dismissed the day the license was granted. A lawsuit is pending in Guatemala’s Constitutional Court for lack of due process in this regard, which has raised questions about the legality of Tahoe’s exploitation license.
“We already see the negative impacts of the Escobal mine,” says one community member from San Rafael las Flores. He works digging wells in the community and surrounding areas for potable water. “Since Escobal started operating, we’re seeing these wells dry up…. Enough is enough. It’s time that the government and company stop intimidating the people in San Rafael las Flores and the surrounding areas for standing up against the mine.” he says.
nisgua_admin2018-01-10T20:12:58+00:00June 12th, 2015|Defense of life and territory, Escobal|