FIRST ARREST FOR GENOCIDE IN GUATEMALA
Today, June 17th, General Héctor Mario López Fuentes was captured in Guatemala City, twenty-nine years after having initiated the execution of Plan Victoria 82, developed by the Army Chief of Staff and Efraín Ríos Montt’s de facto government. He is accused of having perpetrated genocide against the Maya Ixil people in the years 1982-83.

The victims and survivors of genocide have knocked on the doors of justice for more than ten years. Today the justice system has the opportunity to prosecute genocide, a crime which is an affront to the dignity of all humanity. These events fill us with hope and motivate us to continue the fight against forgetting.

We express our satisfaction at this arrest. We hope that the authorities continue to pursue the judicial process against him, and that he will be the first to be convicted of the many responsible for genocide that remain at liberty. We will continue on the path towards justice, recuperating our history and speaking the truth.

We invite you to accompany us in this process, which is historic not only for our country, but for Latin America and the world. We will show that our justice system CAN work, and has the capacity and courage to prosecute the crime of genocide.

Genocide will not remain in impunity! 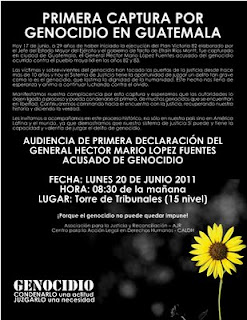