“We are talking about one of the biggest cases of forced disappearance in Latin America.” – Thelma Aldana, Guatemala Attorney General

Major arrests were made yesterday morning related to cases of crimes against humanity and forced disappearances committed between 1981 and 1988 by former high-ranking military officers. The remains of 558 people have been found at 4 different sites at the CREOMPAZ military base in Cobán; through DNA testing, many of the remains have been shown to belong to people killed in the 1981 massacre in Plan de Sánchez and other massacres and forced disappearances carried out by the military in the area during the 1980s. Fourteen high-ranking military officers were arrested in connection to the massacres and forced disappearances, including Benedicto Lucas García, head of the Guatemala army between 1978 and 1982; Manuel Antonio Callejas Callejas, head of army intelligence unit G-2 during the same time; and Francisco Luis Gordillo Martínez, co-conspirator with Ríos Montt during the 1982 coup d’etat that began the bloodiest period of Guatemala’s internal armed conflict.*

Benedicto Lucas García, was named alongside his brother, former President Romeo Lucas García (deceased), in the national genocide cases filed in 2000. As head of the army during the Lucas García dictatorship, Benedicto Lucas García is accused of implementing scorched earth policies against the civilian population – a strategy that saw more than 200,000 killed and another 45,000 disappeared during Guatemala’s 36-year internal armed conflict. 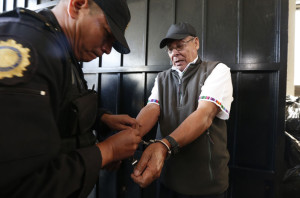 Former head of military intelligence Manual Antonio Callejas Callejas was arrested in connection to the forced disappearance of Marco Antonio Molina Theissen; in the investigations, he has also been named for his involvement in the “Cofradia” – a group of military officers connected to common crime and corruption during the Lucas García dictatorship.

Based on testimonies given by the family members of those disappeared in the Cobán region in the early 1980s, the Association of Family Members of the Detained-Disappeared of Guatemala (FAMDEGUA) filed a complaint in 2002 with the Public Prosecutor’s office requesting an investigation of the former Military Base 21, today known as CREOMPAZ.

When the High Risk Crimes Court delivered a guilty verdict in the case of the Plan de Sánchez massacre in February 2012, sentencing former civil defense patrollers to a total of 7,710 years in prison for crimes against humanity, the courts asked the Public Prosecutor’s office to investigate allegations made during the trial of other crimes committed in the former Military Zone 21. On the basis of that request, the Public Prosecutor’s office opened an investigation.

Fourteen exhumations and further investigations have taken place since 2012 by the Public Prosecutor’s office with the support of FAMDEGUA, the Mutual Support Group (GAM) and the Forensic Anthropology Foundation of Guatemala (FAFG).

The remains of 31 people excavated at the base are linked to the forced disappearance of 75 young men from the community of Pambach, Santa Cruz Verapaz, Cobán in 1982. Sixty-four remains were found in the same grave and it is assumed that the remainder belong to the others from that community who were disappeared. The testimony of one survivor of the 1982 disappearance/massacre in Pambach will be included in the CREOMPAZ case.

Other related cases include the massacre at Río Negro and forced disappearances in the communities of Caserío Chituj, Chiacal, and Barrio San Sebastián in San Cristóbal Verapaz and Chisel.

NISGUA has provided human rights accompaniment to FAMDEGUA for more than a decade through the ACOGUATE project. Follow @NISGUA_Guate on Twitter for updates on the arrests and upcoming indictment hearings.