An historic opportunity for justice in Guatemala

After the arrest and capture of retired general Héctor López Fuentes on Friday, proceedings yesterday officially indicted former Army Chief of Staff for the crimes of genocide, crimes against humanity and forced disappearance.  Representatives of the Association for Justice and Reconciliation (AJR), an organization of survivors of genocide, joined their legal advisors from the Center for Human Rights Legal Rights Action (CALDH) to issue the statement below.

AN HISTORIC OPPORTUNITY
FOR JUSTICE IN GUATEMALA
Prosecute genocide and guarantee it is not repeated
After 28 years of impunity for crimes against humanity and genocide committed during the internal armed conflict against the Maya people, Judge Carol Patricia Flores formally indicted one of the authors of genocide – General Mario López Fuentes, who acted as army chief of staff from March 23, 1982 until October 21, 1983 in the government of Ríos Montt.
In 2001, surviving victims of genocide submitted a complaint against the military high command of 1982-1983, made up of Head of State, Efraín Ríos Montt; Minister of Defense, Oscar Humberto Mejía Víctores and General Héctor Mario López Fuentes.  After almost 10 years, the Attorney General has completed the investigation of this case and requested an arrest warrant for one of those implicated.  This was successfully carried out and he
[López Fuentes] now remains formally linked to a judicial process.
We express our satisfaction with these events, which demonstrate that Guatemala has been able to create the conditions within which to prosecute grave violations of human rights committed during the armed conflict.  Among other conditions, there are today public servants who do not allow themselves to be intimidated by structures linked to the aforementioned crimes and which work to maintain those crimes in impunity.  Likewise, the institutions in charge of prosecuting crimes have the will to act.  We hope that the rest of the process will be characterized by actions like these, which bolster the rule of law in our country.
For the family members of the victims and survivors of the armed conflict, this event represents a hope that motivates us to continue in the struggle for truth and justice.  It signifies an historic opportunity to break with impunity and demonstrate before the entire world that we are a country that complies with domestic legislation and international norms regarding human rights.
Justice is the fundamental key that guarantees that violent acts will not be repeated.  This is the basis of the necessity of applying justice, not just for past crimes, but also for crimes committed today.  Our present day situation [in Guatemala] is a clear example of what happens when structures that operated in the past are not dismantled and, to the contrary, consolidate their operation.
Today, Guatemala took a step forward in an emblematic case for the country; we demand that the State serve justice in accordance with the law.  We exhort all Guatemalans who suffered the grave human rights abuses that occurred during the internal armed conflict to continue breaking the silence, to tell the truth of what happened, to construct a new collective memory and to demand JUSTICE.
Guatemala, June 21, 2011.
Association for Justice and Reconciliation – AJR
Center for Legal Human Rights Action – CALDH
For more information (in Spanish): http://paraqueseconozca.blogspot.com/ 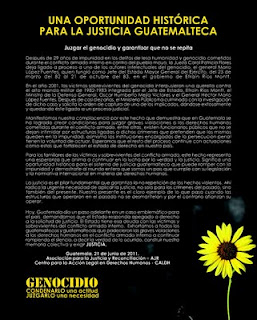