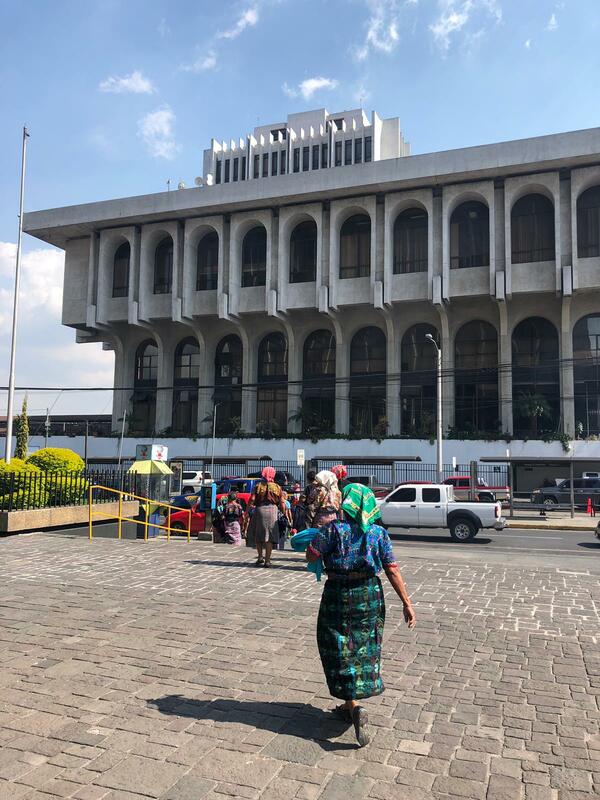 Current accompanier, Tal Netter-Sweet, shares their experience of accompanying Maya Achí women who survived sexual violence committed by civil defense patrols, operating under the control of the Guatemalan military, in the early 1980’s. The women are moving forward an important legal case demanding justice for sexual violence and other crimes against humanity. Learn more about the Maya Achí Sexual Violence case through an upcoming May webinar in Spanish and in English, featuring two women who are bringing the case to trial. Take action in support of the women’s struggle for justice today!

There’s a sign by a bus stop that I pass on afternoon runs through my neighborhood in Guatemala City. The sign is sponsored by the Guatemalan Forensic Anthropology Foundation (FAFG), a non-profit that exhumes clandestine mass graves from the time of the Internal Armed Conflict, working to recover the identities of victims using forensic analysis along with survivor testimony. Additionally, FAFG collects DNA samples from survivors in order to identify and return the remains of their disappeared family members. Having the physical remains of loved ones who were forcibly taken, murdered, and left in unmarked graves allows for their proper burial––often according to traditional Maya customs––and for long overdue healing.

This particular FAFG sign features a picture of a Maya woman receiving a saliva swab, and announces that FAFG has collected the DNA of almost 16,000 survivors and has achieved over 3,000 identifications. Below are some photos I found on the web of similar billboards. They read, Do you have a family member disappeared between 1960 and 1996? With DNA we are identifying them, just a saliva sample is sufficient. After 30 years… we can still find them! 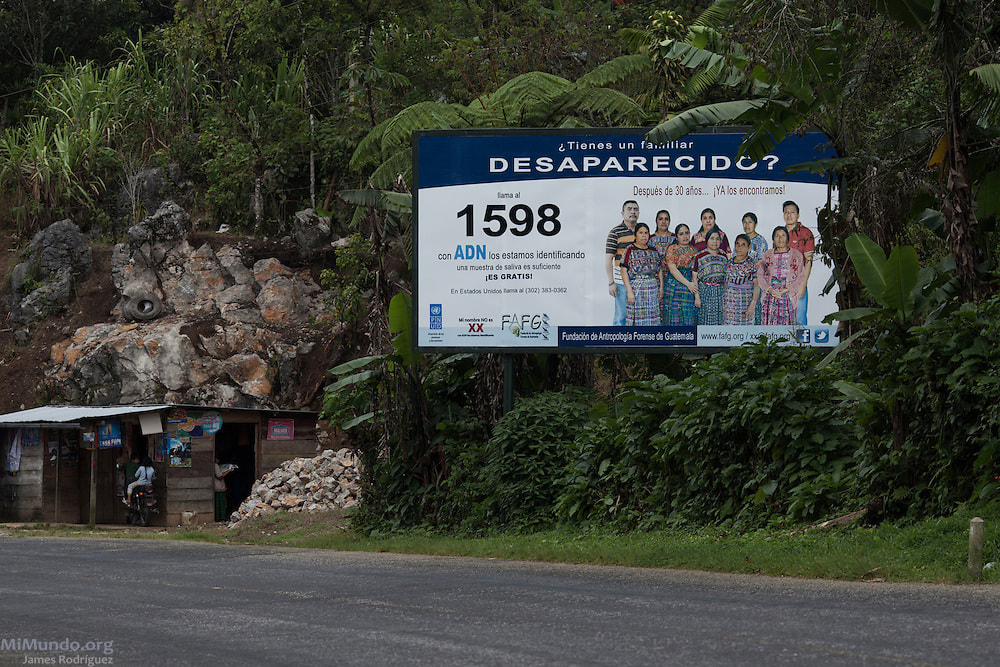 Aside from going on afternoon runs, I’m also in the routine of listening to Up First,NPR’s daily news podcast. There’s a recurring advertisement on this podcast for 23andMe, a company to which you can send a saliva sample and explore what your DNA reveals using the comapny’s genetic data bank. Such ads announce, Discover how often you might move your arms and legs while sleeping. Explore reports like this with 23andMe’s health plus ancestry service kit. On a less trivial level, 23andMe’s website shares stories of customers who reunited with their birth families, discovered long lost relatives, or learned surprising details about their ancestry.

I’m continually struck by the juxtaposition of these two ads. In the States, 23andMe advertises the fun of exploring your DNA, the joy of building new family connections, and the excitement of learning about your ancestry. In Guatemala, FAFG advertisements highlight the struggle to fill the gaping holes left in Guatemala’s social fabric by a recent history of genocide.

I’m reminded on every afternoon run in Guate that even decades after the signing of the Guatemalan Peace Accords in 1996, survivors of the Internal Armed Conflict are still asking these basic questions: where are my parents buried, how did my siblings die, will I be able to give my children a proper funeral? FAFG’s sign reminds me how heavily the past continues to weigh on the present in Guatemala. And how that past is often traumatic, difficult to delve into, and impossible to disconnect from the current political context.

Furthermore, the current political context in Guatemala is incredibly troubling. Over the past several months, the Guatemalan Congress has been discussing a bill to amend the 1996 Law of National Reconciliation, which named genocide, torture, and forced disappearance as unpardonable crimes. However, the proposed changes to the law would grant amnesty to those who have been convicted of these crimes, as well as other grave crimes such as sexual violence. Those convicted would be released from jail within 24 hours. (Read here to see who would go free.) The proposed legislation would also terminate all cases currently underway involving such crimes, and would keep any cases from being heard in the future.

Due to mounting national and international pressure––including a court order by the Inter-American Court of Human Rights––the third and final reading of the ‘amnesty bill’ has not been scheduled. However, the bill has not been permanently shelved either. Furthermore, Congress has since changed tactics, focusing on other initiatives that would ultimately achieve a similar goal. (This article provides a fantastic overview of where the ‘amnesty bill’ currently stands, Congress’ shift in strategy, and the general uncertainty of Guatemala’s future due to upcoming presidential elections in June.)

One of the cases that would be put to a stop with the passing of the ‘amnesty bill’ is the Maya Achí Sexual Violence case. In this case, 36 women from rural villages around the town of Rabinal are speaking out against the men who raped them in the early 80s. At the time, these men were members of civil defense patrols (PACs) that operated under military command during the Internal Armed Conflict. Notably, up until they were arrested in May of last year, these men continued to live in the same areas as the women now testifying against them. And if acquitted or granted amnesty, they would return to these same communities.

I’ve had the opportunity to work closely with the Maya Achí Sexual Violence case, since we accompany several of the women involved in the case as well as their legal team. This accompaniment entails attending court hearings in Guatemala City, meeting with lawyers in the town of Rabinal, and traveling to the surrounding villages to visit the women in their homes.

In late February, I found myself bumping along a rocky road in a camioneta (a colorfully painted old U.S. school bus, a common form of transportation here in Guate) on my way to the mountainous village of Chichupac. I had previously met many of the women from Chichupac at a press conference in Guatemala City, as I mentioned in my last F&F. However, as we hiked up and down the steep hills of Chichupac to reach their houses, I was struck by the women’s courage to take part in legal proceedings so far away––especially considering the dangers they face close to home (the families of the men arrested continue to live nearby). And given that legal proceedings in Guatemala City seem worlds away from the rural reality of the everyday lives of these women, their determination in the face of a looming ‘amnesty bill’ is even more inspiring. Not to mention that this case breaks deeply rooted social taboos surrounding the discussion of sexual violence.

This short clip provides a small window into the world of these Maya Achí women:

Earlier this week, we accompanied the women of the Maya Achí Sexual Violence case––along with many others who travelled from their villages around Rabinal in solidarity––during two days of court hearings. As we left the courthouse together on the second day, one of the lawyers was struggling with a large duffle bag full of legal documents. Without hesitation, one of the women involved in the case picked up the bag and easily slung the strap across her forehead, the way she would normally carry bundles of firewood at home. This moment stands out to me as a perfect representation of all the strength these Maya Achí women bring to their struggle for justice. 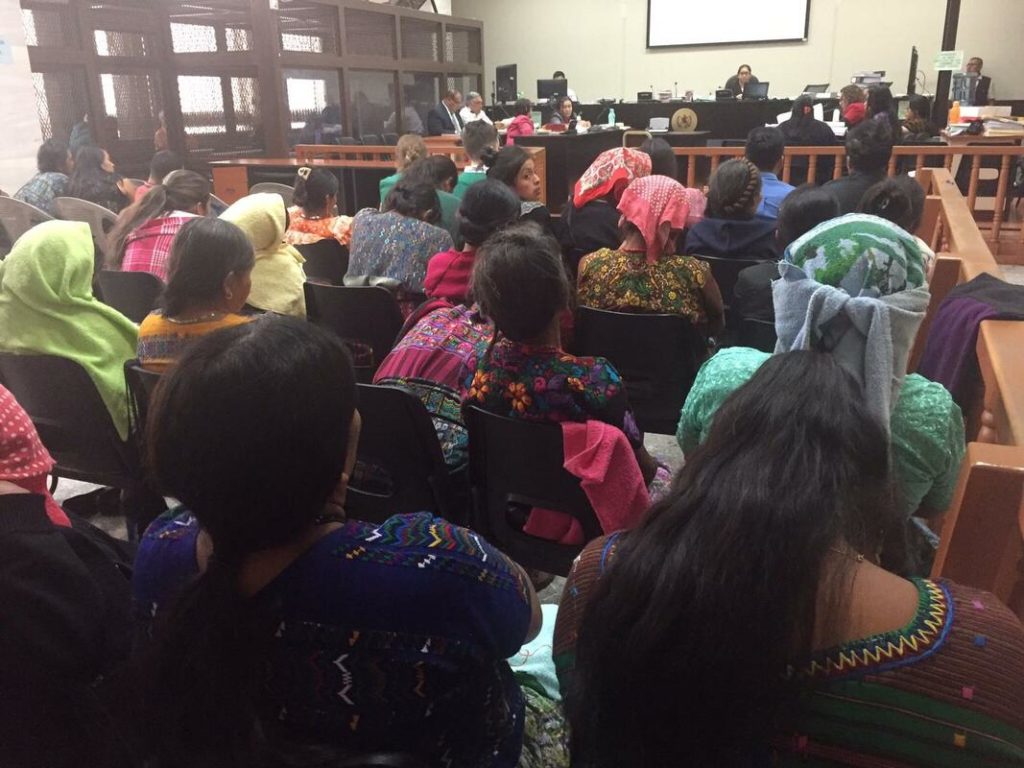 I invite you to stand in solidarity with the women of the Maya Achí Sexual Violence case––as well as all survivors of the Internal Armed Conflict as they fight for truth, justice, and memory against a government that favors impunity. You can find a list of concrete actions to take against the proposed “amnesty bill” here––such as calling your elected representatives, signing a petition organized by the Center for Justice and International Law (CEJIL), and joining Amnesty International in a letter writing campaign. And if you’d like to learn more about the Maya Achí Sexual Violence case, tune in on May 9, 2019 at 6PM Eastern time for a webinar (in English) co-organized by NISGUA and Breaking the Silence, featuring one of the lawyers and one of the women testifying in the case. You can find more info about the case and how to take action here, and register for the webinar here.