8 years after the genocide sentence: continued impunity and a justice system in crisis 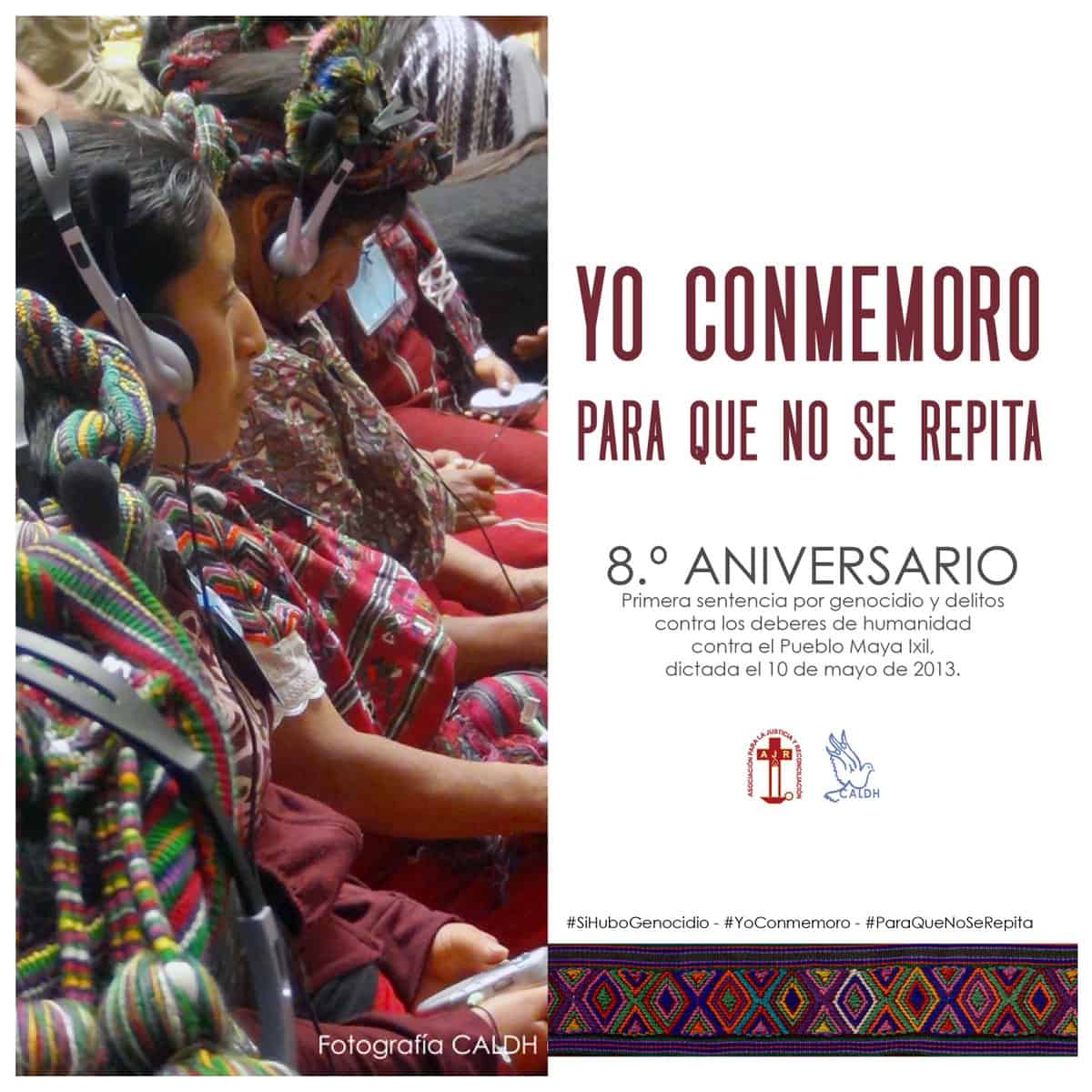 “I commemorate to avoid repetition!” Flyer, of the eighth anniversary of the first sentence for genocide and crimes against against the Maya Ixil people, released on May 10, 2013. Credit: Center for Legal Action on Human Rights, CALDH.

To mark the 8th anniversary of the sentence that found ex-dictator Efraín Ríos Montt guilty of genocide and crimes against humanity, survivors organized with the Association for justice and Reconciliation (AJR) and the Center for Human Rights Legal Action (CALDH) held a virtual concert and release the following statement.

8 years after the genocide sentence: continued impunity and a justice system in crisis

8 years after the High-Risk Crimes Court A delivered the historic sentence that found General José Efraín Ríos Montt guilty of genocide and crimes against humanity against the Ixil Maya people, we affirm the validity of the sentence and reclaim the historical memory of Indigenous peoples.

This trial uncovered networks of impunity that remain deeply entrenched in the justice system, much like the persistence of the groups in power who refuse to live in full and true democracy. We see now how the same actors who denied the genocide during the trial and opposed the victims’ legitimate right to justice have returned to play central roles in the deep deterioration of this country’s democracy. This is a dramatic setback for human rights, and a cooptation of the justice system to maintain their perverse privileges.

This sentence represented an important breakage in impunity, and therefore we continue celebrating, commemorating, and spreading the truth. More than 100 witnesses revealed the truth of what happened. They confirmed the written military reports. They bravely told the system their truth, the truth of the people. In this historic sentence, the court admitted as evidence the brave testimonies of Ixil men and women, who after many years have been heard by and their suffering made known to the court. This sentence is already part of the history of humanity and of Guatemala.

The testimonies and the scientific documented proof obtained in the process – which the court also admitted as evidence – demonstrated the intention to eliminate the Ixil people, who were identified as an Internal Enemy. The ruling tells us: “…the violent actions committed against the Ixil people were not a spontaneous activity, but the concretization of previously-made plans that formed part of state policy aimed at the elimination of a certain ethnic group … It has been proven ad nauseum that they were civilians, working in agriculture.”

Scientific, forensic, social, weaponry, and military expert testimonies all confirmed that the events that occurred fit into the crime of genocide. Sexual violence was a systematic attack against women and contributed to the destruction of the social fabric — its objective was to eliminate the ethnic group of the Ixil Maya. Many women suffered intentional violence and humiliation; the aim was not only to inflict physical and mental wounds on members of the group, but also to prevent the group’s physical and cultural reproduction.

As the sentence says, prevailing racism in Guatemala was “the machinery of extermination,” the basis of the genocide. “Racism is expressed in behaviors, imaginations, and racist practices and ideologies that occupy different spaces and expand to society as a whole … Racism deeply affects, provokes, collaborates and contributes to the genocide that occurred in Guatemala.”

The surviving victims of the genocide taught Guatemalan society an enormous and beautiful lesson; it is possible to use established democratic means to resolve their controversies. They showed us that in spite of the deep impunity that we face in our country, it is possible to reach justice. Those who call for hate and violence, those who fear democratic processes, have never believed in Peace or in Democracy. As we observe the situation of our justice system and our democracy now, we believe it is necessary to keep this sentence alive.

For that reason, we continue discussing, analyzing, sharing knowledge, creating and recreating. Because it would seem that little or nothing has changed. Repression, criminalization, and stigmatization continue for those of us who exercise our rights and insist that they be respected. The implementation of mega-projects, hydro-electric dams, and the extraction of natural resources continues to devastate our territories and the life of our people. But also, as was true over 30 years ago, today our people and our communities form a great peaceful resistance. And that is the reason why, today this sentence must travel to all corners of Guatemala where there is indignation about corruption, about the impunity of officials, about the exhaustion felt when facing the collapse they have brought our country to.  So we keep the Genocide Sentence alive, because it is legitimate, because it is the truth of the people and because we do not want for these events to be repeated ever again.

“We firmly believe that recognizing the truth helps to heal the wounds of the past, and the application of justice is a right that supports the victims, in turn helping to strengthen democracy in our country. Raising consciousness that these types of actions should never be repeated, because the people of Guatemala want to live in peace, recognizing our identiy, our pluricultural and  multilingual richness, and respect for the free expression of our ideas…” – excerpt from the Genocide Sentence 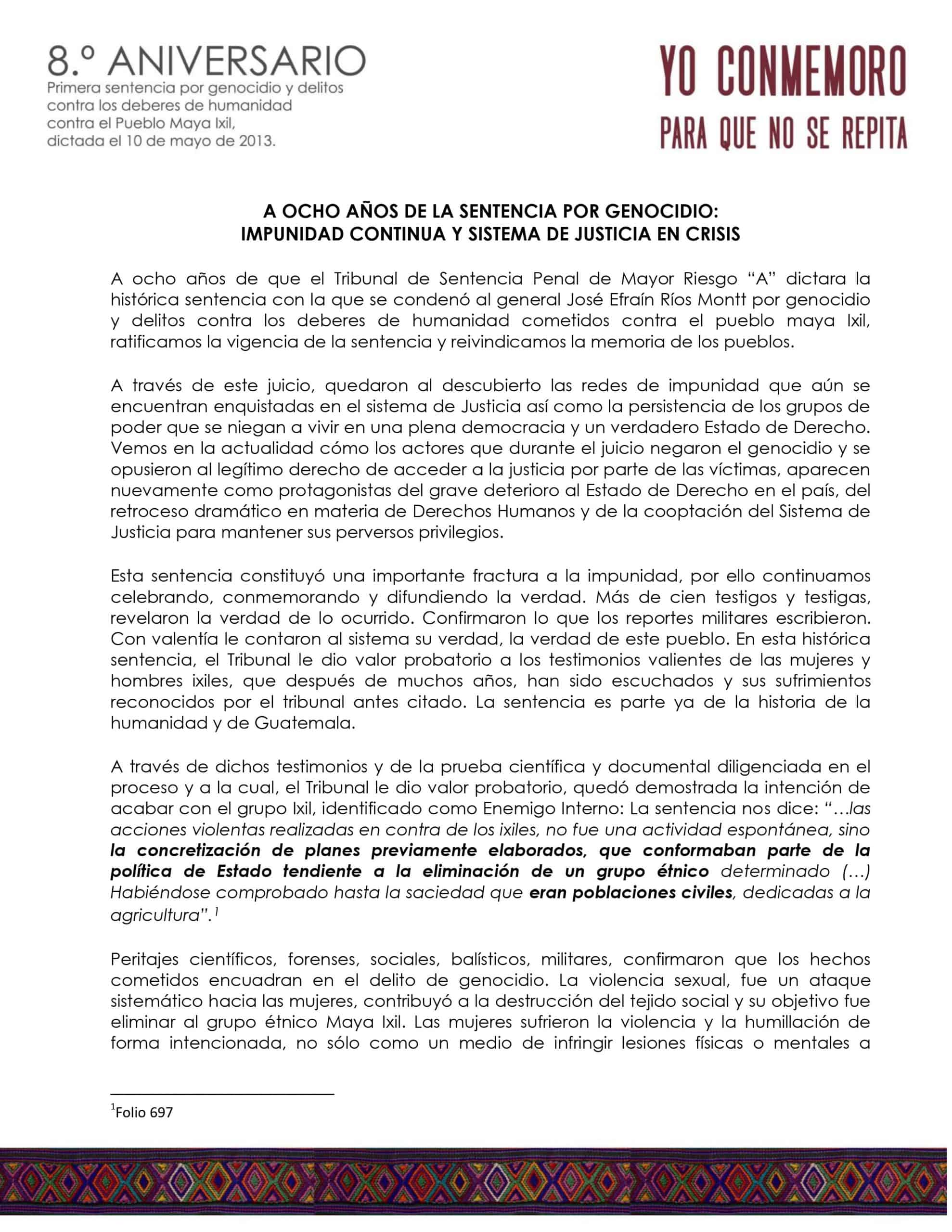 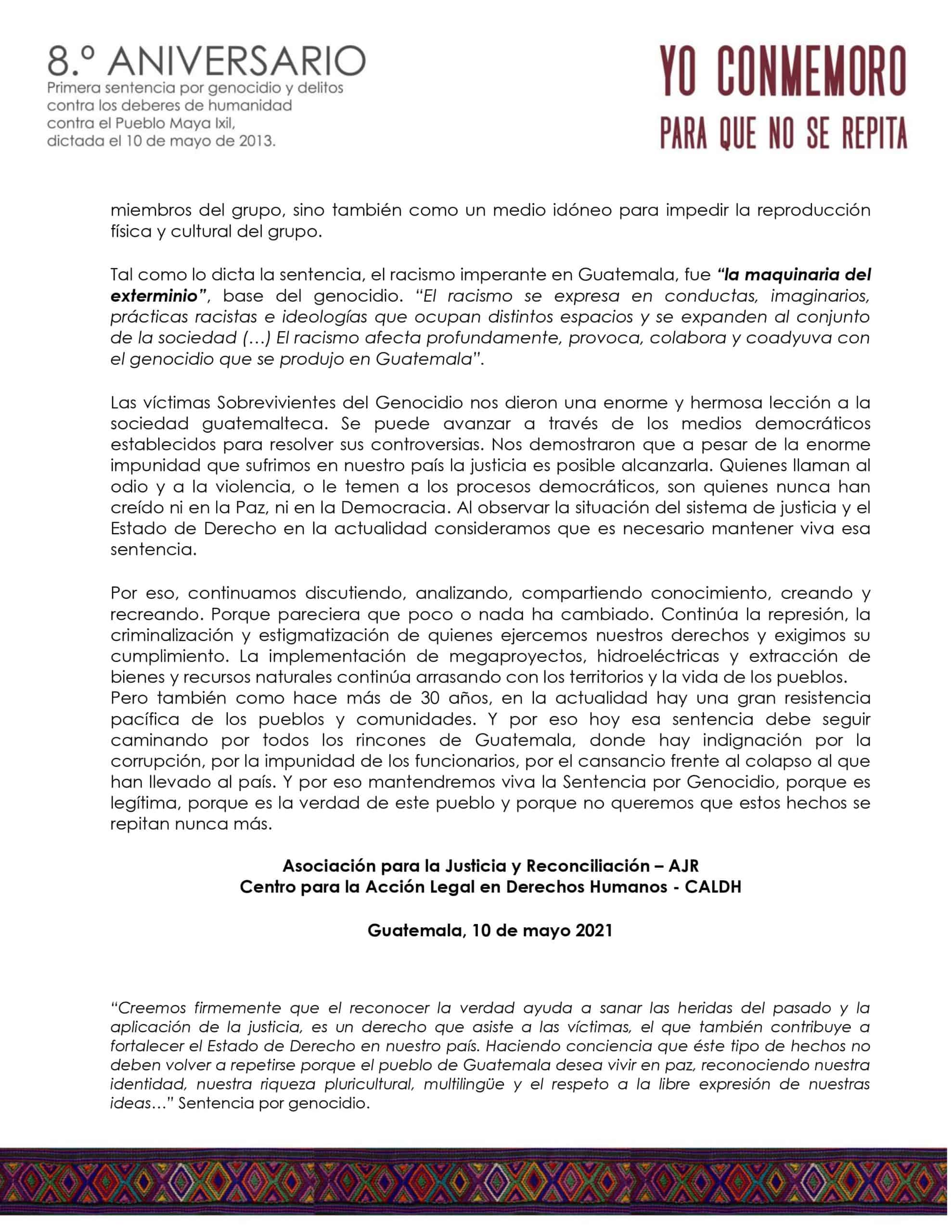