The Military Diary is a 54-page document that lists the names of 183 people who were captured and forcibly disappeared between 1983 and 1985, during the term of dictator Oscar Humberto Mejía Victores. In 1999, the document was anonymously withdrawn from the Guatemalan Military Archives and handed over to National Security Archives researcher Kate Doyle. The Military Diary has been authenticated by both the National Security Archive and the Guatemalan government, and provides an it demonstrates the systematic government’s use of forced disappearance, torture, and extra-judicial killings by the state against the civilian population.

While a 2012 ruling by the Inter-American Court of Human Rights stated that the Guatemalan government has the responsibility to conduct a full investigation into the forced disappearances listed in the Diary and prosecute those responsible, there have been few advances in the case.

Nevertheless, as the relatives of the disappeared declare “During this time of pandemic and restrictions we cover our mouths but we will not be silent”,  they remind us of the collective work that we all have to support to achieve justice in this case.

Watch a short video that the relatives prepared for this anniversary

It’s been 21 years since the release of the military record known as the Military Diary or Dossier of Death, the document containing operations carried out by the armed forces of the State of Guatemala during the years 1983-1985. It details the control, tracking, illegal detention, execution, and forced disappearing of 183 people.

We declare to society that

More than 3 decades have passed since the illegal detention, torture, and disappearance of our family members, and to date there is no information on the whereabouts of the vast majority of them. While our family members were subjected to the repressive forces of the state, those who were responsible for those grave crimes have yet to be convicted.

Today marks 21 years since the publication of the document that revealed that our family members were considered internal enemies and convicted without any process regarding human rights or in accordance with any law.

8 years have passed since the Interamerican Court of Human Rights issued the sentence proving the State of Guatemala’s guilt and responsibility in various violations of human rights, including the violation of physical and mental wellbeing and the lives of the people who were detained and disappeared, as well as the consequences of the multiple violations of the rights of their family members.

As the relatives of the victims of the Military Diary, we are deeply worried by the arbitrariness of the norms established by the government of Guatemala to address the public health emergency. Rather than establishing mechanisms to address the crisis over the short- and long-term, these norms have only further ingrained the harsh reality that people have endured for hundreds of years:  abandonment of the state, inequality, poverty, exclusion, racism, stigmatization, and everything that our families fight against in our search for a more just Guatemala.

These conditions have also impacted the surviving victims of the Internal Armed Conflict and state politics throughout nearly four decades.

Furthermore, we are worried by the actions of President Giammattei dismantling the institutions that work to guarantee peace, the Secretary of Peace and The Commission for Monitoring the Peace Accords, in addition to debilitating the Secretary of Agrarian Affairs, the Commission of Dialogue, and the COPREDEH under the pretext of necessary budget cuts to attend to COVID-19 emergency measures, which is doubtful especially when those emergency measures do not imply even 5%.

It would be grave for the progress of democracy and the rule of law if these actions of recomposition were to be taken by the dark and corrupt forces that have co opted the state for decades and have only brought hunger, poverty, marginalization, and repression to the people of Guatemala

For that reason, we demand to the Guatemalan State:

To the Public Ministry:

The investigation, prosecution, and punishment of those who committed crimes against humanity as documented in the authentic military record, Military Diary.

To the Guatemala Government:

To the Ministry of the Interior

To the Judicial Body

During this time of pandemic and restrictions we will cover our mouths but we will not be silent!

Until we find them!

Also, we share with you this statement by the Genocide Never Again Coalition, which express support and solidarity for the relatives of the victims of the Military Diary:

21 YEARS SINCE THE PUBLISHING OF THE DIARIO MILITAR

WE EMBRACE THE FAMILIES FIGHTING FOR MEMORY, TRUTH AND JUSTICE

21 years ago the document known as the “Military Diary, or Death Dossier” was published. This document documented the illegal detention and forced disappearance committed by Guatemalan state security forces between the year 1983 to 1985 during the Internal Armed Conflict, and demonstrate the systemic planning by which the regime operated illegally against hundreds of citizens.

The Military Diary was directly responsible for the identification of 183 people whose profiles were in the document, and made known what happened to them. Although the document reveals the cruelty of what could happen to these people, for their families it was an answer that confirmed what the state’s policies were at that time.

The appearance of this document 21 years ago reaffirmed the struggle that the families continued for over three decades, in search of their disappeared loved ones. The Military Diary was a possibility within the uncertainty that is forced disappearance, a beam of truth and a guide for the families that continue hopefully in search of memory, truth, and justice.

As the Coordinación Genocidio Nunca Más (Genocide Never Again Coalition), we embrace and stand in solidarity with the struggle of the families of the Military Diary, you, and your persistence in this struggle, are an example of day to day dignity, mothers, fathers, brothers, sisters, sons, daughters, partners, aunts, uncles, grandmothers, grandfathers, granddaughters and grandsons who make up this large Family of the Military Diary. May you know that you are not alone, that on his long path you have walked we are with you and we will always support you.

UNTIL THEY ARE FOUND! 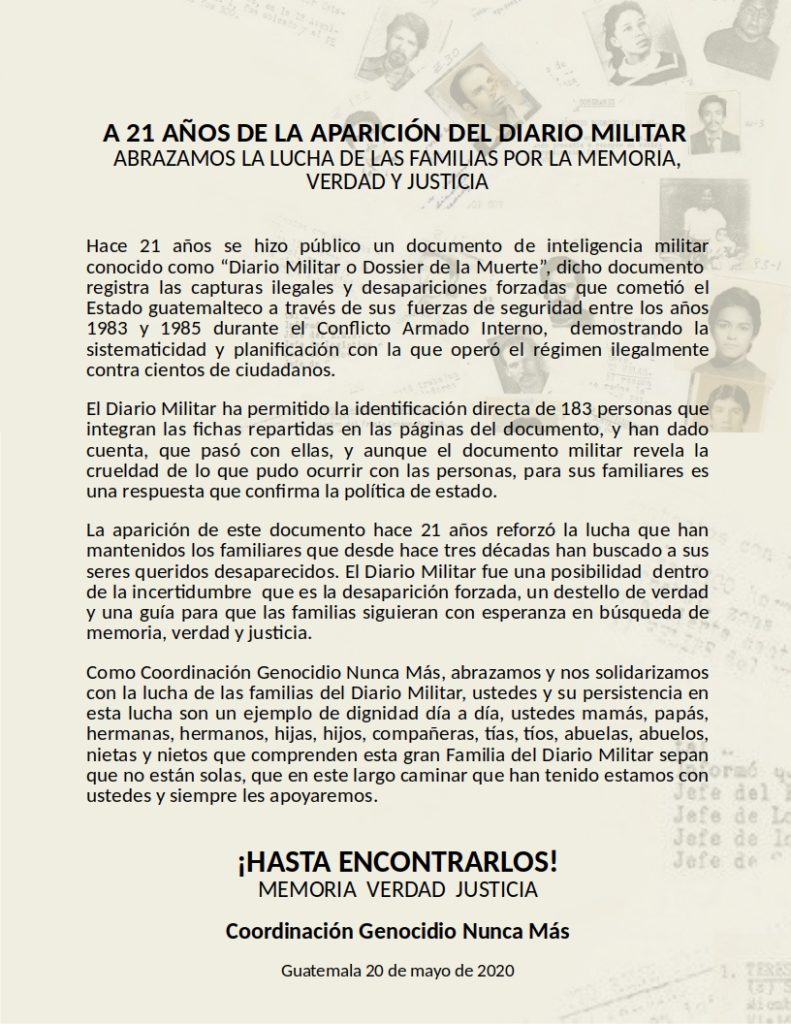