On May 11, the military José Antonio Vásquez García and César Augusto Cabrera Mejía, accused in the CREOMPAZ case, asked Judge Claudette Dominguez to obtain conditional freedom in the context of the COVID-19 emergency. The plaintiffs in the CREOMPAZ case published a first statement explaining why this petition should be denied as they were being accused of grave crimes against humanity.

The petition was denied by the judge, but Monday, the 18th, two other military accused in the same case will also try to obtain conditional freedom. Stay tuned as we will be updating this page. 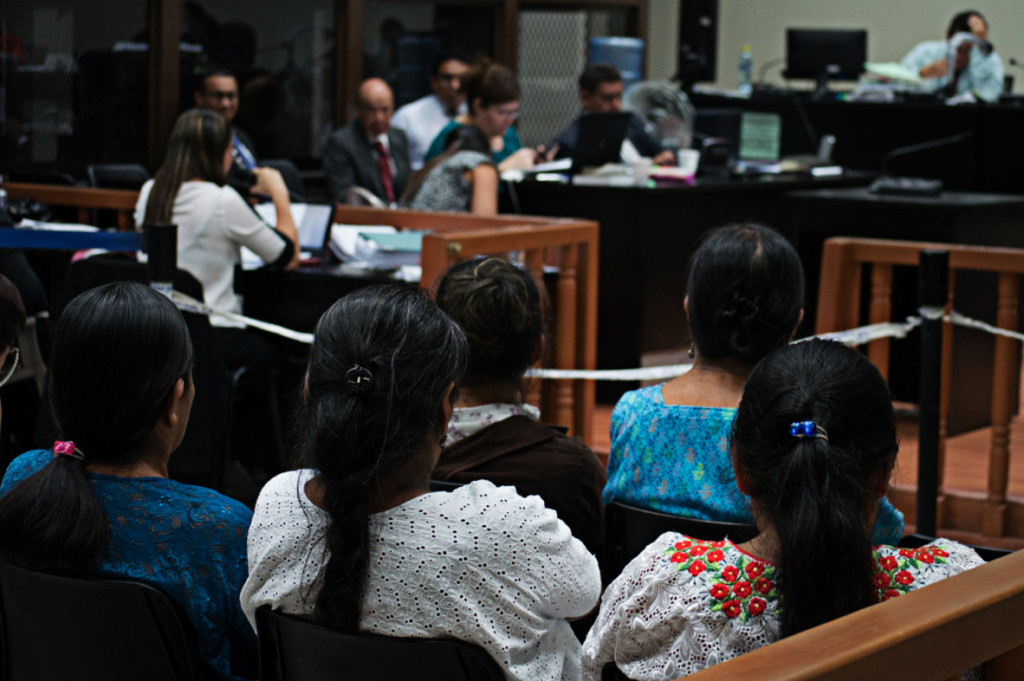 Women plaintiff on the CREOMPAZ case attending a hearing on 2016. Credit: Nelton Rivera

Militaries José Antonio Vázquez García and César Augusto Cabrera Mejía, who are accused of crimes of forced disappearance and crimes against humanity in the CREOMPAZ case, are petitioning a review of the measures of coercion against them. Such petition seeks to modify their legal status of pre-trial detention, which is currently being served at the Medical Military Hospital.

As a result, the measure review hearing will be on Monday May 11th in High Risk Crimes Court “A. The surviving victims, plaintiffs in the CREOMPAZ case, and organizations that accompany them DEMAND that the Judge Claudette Domínguez deny the petitions from the accused for the following reasons:

In the case of José Antonio Vázquez García and César Augusto Cabrera, Judge Domínguez made the decision to keep them under pre-trial detention, due to the gravity of the crimes they are accused of, as well as the alleged possibility of their evasion from justice. Second, and contrary to such resolution, regarding the accused Edgar Ovalle in this same case, Judge Domínguez removed him from pre-trial detention and he is currently a fugitive.

For the reasons stated above, We request Judge Dominguez to rule against Militaries José Antonio Vázquez García and César Augusto Cabrera Mejía’s petition, which we consider to be unacceptable since the risk of justice evasion it presents.

As for the reclusion center where the accused are currently serving pre-trial detention, the Medical Military Hospital has been asked to submit a thorough report of the current conditions they are living in. It is our understanding that the prosecuted are to be found under perfect conditions, with staff equipped to conduct their care. The accused have already enjoyed the privilege of being in pre-trial detention in the Military Medical Hospital, that is in comparison to other detention centers, where deplorable conditions and overcrowding are to be found.

Sanctions for crimes against humanity must be applied in proportion to the crimes committed, therefore, measurements such as house arrest are not acceptable. On the contrary, it would constitute a new mechanism of impunity.

It is the responsibility of the State of Guatemala, through the Penitentiary System and the Ministry of Health, to guarantee and secure life and health of anyone deprived from their liberty. House arrest does not constitute a guarantee of better health conditions for these people. Instead, in this specific case, and due to the prosecuted being ex-military personnel, they should remain serving pre-trial detention in the current reclusion center.

CRIMES AGAINST HUMANITY MUST BE JUDGED AND THE RESPONSIBLE CONDEMNED

NO TO IMPUNITY IN THE CREOMPAZ CASE

Read the statement in Spanish 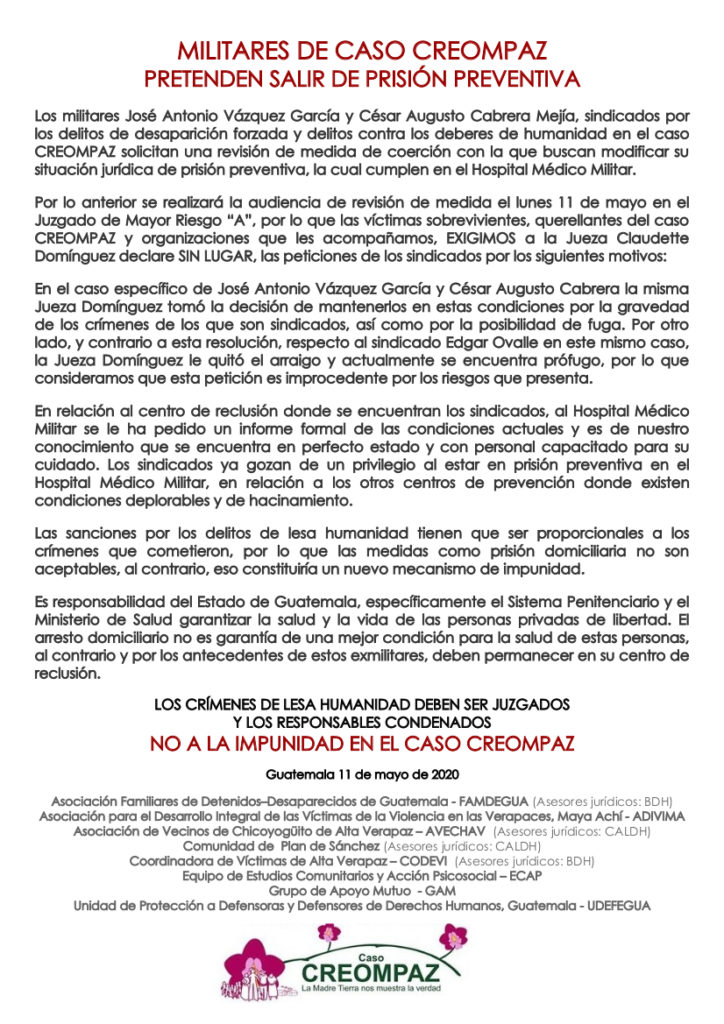