NISGUA’s Tahoe on Trial speaking tour kicked off yesterday by going right to the U.S. source – Tahoe’s U.S. headquarters in Reno, Nevada. We were honored to join local indigenous leaders and activists organized with the Nevada Progressive Leadership Alliance (PLAN Nevada) in downtown Reno for a rally to commemorate Indigenous Peoples’ Day and draw connections between grassroots struggles across borders. Together with other speakers, CODIDENA representative Llan Carlos Dávila denounced the neo-colonization of community lands through the imposition of resource extraction activities without consent, ongoing militarization and racism.

Those who spoke drew connections between the struggles to defend land and natural resources of indigenous and First Nations people in the U.S. and Canada with those opposing transnational mining in Guatemala.

From there, a handful of supporters brought concerns directly to Tahoe Resources’ offices about the ways the company is contributing to human rights violations around its Escobal mine in southeastern Guatemala. For years, CODIDENA and other communities impacted by Tahoe’s mine have called on the company to respect the results of consultations that have taken place in municipalities around the mine, where more than 55,000 people have voted against the mine’s presence. Communities have continuously denounced the repressive and violent tactics used against peaceful protesters, including legal charges brought against more than 90 people since 2011 for vocally opposing the mine. All cases have been thrown out for lack of evidence, but still, Tahoe hasn’t listened. 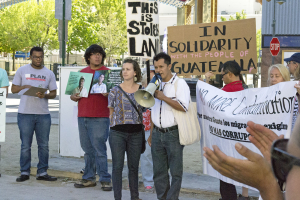 Unfortunately, this pattern of silencing criticism and criminalizing dissent continued at the company’s Reno office. Instead of receiving the 15 or so CODIDENA supporters who went into the office, Tahoe’s Head of Investor Relations Ira Gostin immediately informed us that we were trespassing. Instead of respectfully listening to PLAN Nevada’s concerns about Tahoe’s operations in Guatemala, Gostin told PLAN they were misinformed. Instead of talking with NISGUA about allegations of violence by Tahoe’s private security in Guatemala, Gostin called the police.

Tahoe’s corporate strategy has been to respond to criticism and opposition with criminalization. No doubt, the scale of repression in the United States is significantly different than the scale of repression in Guatemala. But the core reaction is the same. Tahoe attempts to silence dissent using fear, but communities continue to show that they cannot be bullied into standing aside.

At the rally earlier in the day, Pãpalōtl of the Nahuatl Nation read a quote from Waziyatawin, a Dakota professor, author, and activist from the Pezihutazizi Otunwe in southwestern Minnesota. She says: “We live in a police state. The most powerful nation on Earth uses force or the threat of force to maintain control over indigenous peoples, land and resources. According to the occupiers, the only acceptable response to this is compliance. That we must accept the threat of our lands, the rape of our mother Earth and our own subjection. If we do not, we are criminalized, incarcerated or killed.” She finished with this rallying call, “Yet today, we are here, brothers and sisters, to let them know we are still here and we will resist until the end, all for our sacred waters and our Mother Earth.”

On the 2015 Tahoe on Trial tour, NISGUA and CODIDENA are bringing the voices of those most impacted by Tahoe’s Escobal mine to the United States. Click here to find out three tangible things you can do right now to support impacted communities as they denounce ongoing militarization as a result of Tahoe’s mining activities. Connect with us on Facebook and Twitter for live tour updates, and click here to find a tour stop near you!