This morning, survivors of the internal armed conflict held a press conference to denounce remilitarization under President Jimmy Morales’ government and call for the renewal of the mandate for the International Commission Against Impunity in Guatemala (CICIG). Since Jimmy Morales, surrounded by soldiers, held a press conference on August 31 to announce he would not renew CICIG’s mandate past next September, protests have swept across the country. Read more about the political crisis in Guatemala here, including a timeline and additional background information. The original statement made by survivors today can be found in Spanish here.

AS ORGANIZATIONS OF VICTIMS OF THE INTERNAL ARMED CONFLICT, WE OPPOSE THE MILITARY’S PARTICIPATION IN THE DECISIONS OF PRESIDENT JIMMY MORALES AND REJECT THE REMILITARIZATION OF THE COUNTRY

BEFORE NATIONAL AND INTERNATIONAL PUBLIC OPINION
WE EXPRESS:

We emphatically oppose the participation of the Army in President Jimmy Morales’ press conferences and the presence of heavily armed kaibiles and soldiers during the peaceful demonstrations by civil society. We remind society that this same army is responsible for the more than 200,000 deaths and disappearances during the internal armed conflict, as well as the massacres and destruction of our communities. The political and menacing role that the Army is currently playing violates the commitments made in the Peace Accords, in which the State committed itself to reducing the role of the military to safeguarding the country’s borders.

We consider that the actions of President Jimmy Morales in militarizing public security jeopardizes the few democratic advances we have made since the signing of the Peace Accords. It is a clear strategy to impose fear and attempt to silence the demands of the population, just as they did in the 1980s.

As victims and survivors of the military dictatorships of the past and the corruption of politicians of the present, we reject this pact between politicians, the military, and the business elite who, in their desire for total impunity, are putting at risk democracy and peace. We believe that President Jimmy Morales, Members of Congress, and other government officials accused of corruption should resign and face justice.

We are outraged that President Morales, far from assuming and fulfilling the commitments made to peace, is restricting the access we, as victims and survivors of the internal armed conflict, have to truth, justice, reparations, and guarantees of non-repetition.

Likewise, we condemn the militarization of the minds of our children, who are forced to march on September 15. This is a military practice that is at odds with our Mayan cultures and the history of Indigenous peoples.

Finally, we call on all victims and survivors of the internal armed conflict to participate in struggles at the local, departmental, and national levels against corruption, impunity, and illicit campaign financing. We demand the renewal of the CICIG’s mandate and the return of Commissioner Iván Velásquez to Guatemala. 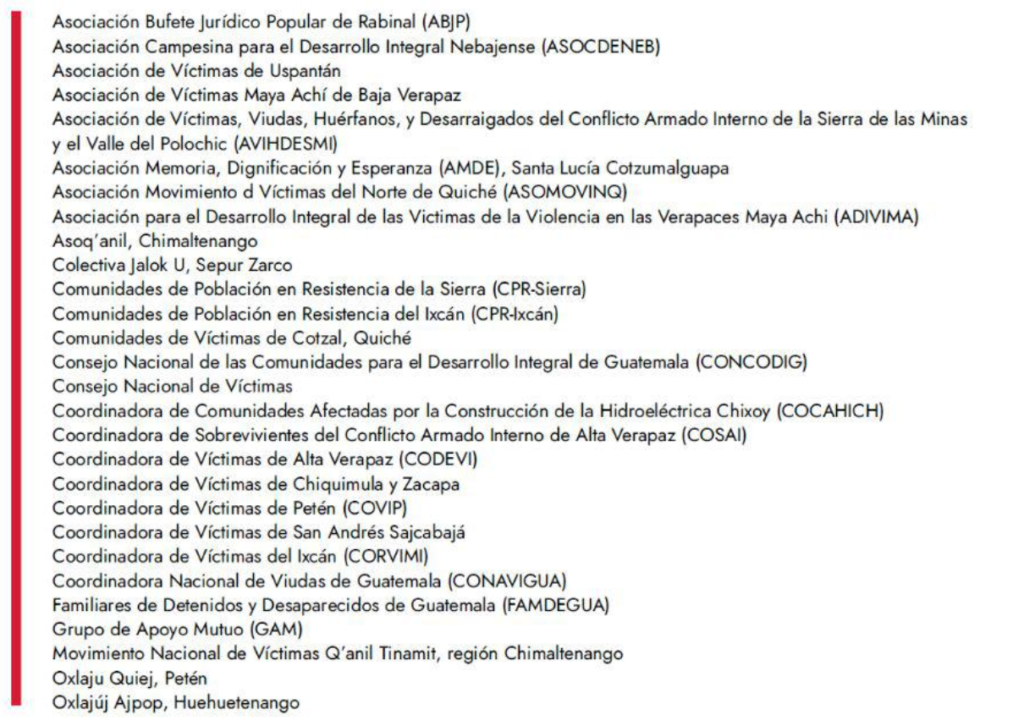