Statement: We reject the shame compensation

On October 12, the Guatemalan Congress introduced a bill to compensate Military Veterans who served during the Internal Armed Conflict. We share with you the statement from La Convergencia por los Derechos Humanos, a coalition of human rights organizations in Guatemala. They  pointed out that the approval of this bill is an insult to the memory of the victims of state terrorism.

WE REJECT THE SHAME COMPENSATION

The passage of the Temporary Development Law, compensating veterans of the military, is an affront to Guatemalan society. Not only because it commits resources from the Treasury without a guaranteed source of income, but also because it insults the memory of victims of State Terrorism.

The beneficiaries of this aberration, self-identify as military veterans who served during the Internal Armed Conflict, a process which as proven in the courts, resulted in acts of genocide,  and with the execution of more than 240 thousand people, the disapearance of another 50 thousand, among them five thousand children, as well as the rape and sexual enslavement of women and girls.

Awarding a state fund to indemnify those who carried out the aforementioned crimes and who received a salary while they were part of the military and obtained their benefits when they left, is an absurdity. While populations impacted by storms Eta and Iota continue to go unaddressed and communities affected by storm Julia face the aftermath of unpredictability, Congress approves a payout of shame.

It’s clear that the passing of this, and other laws recently enacted, seeks to give legality to the ongoing process of dictatorship and authoritarian regression. There is no doubt that through the buying of political favors and clientelism that this law represents, it gives way to electoral fraud aimed at guaranteeing the formal installation of the dictatorship.

For these reasons, we condemn the approval of initiative 6073 and demand that the executive veto it. 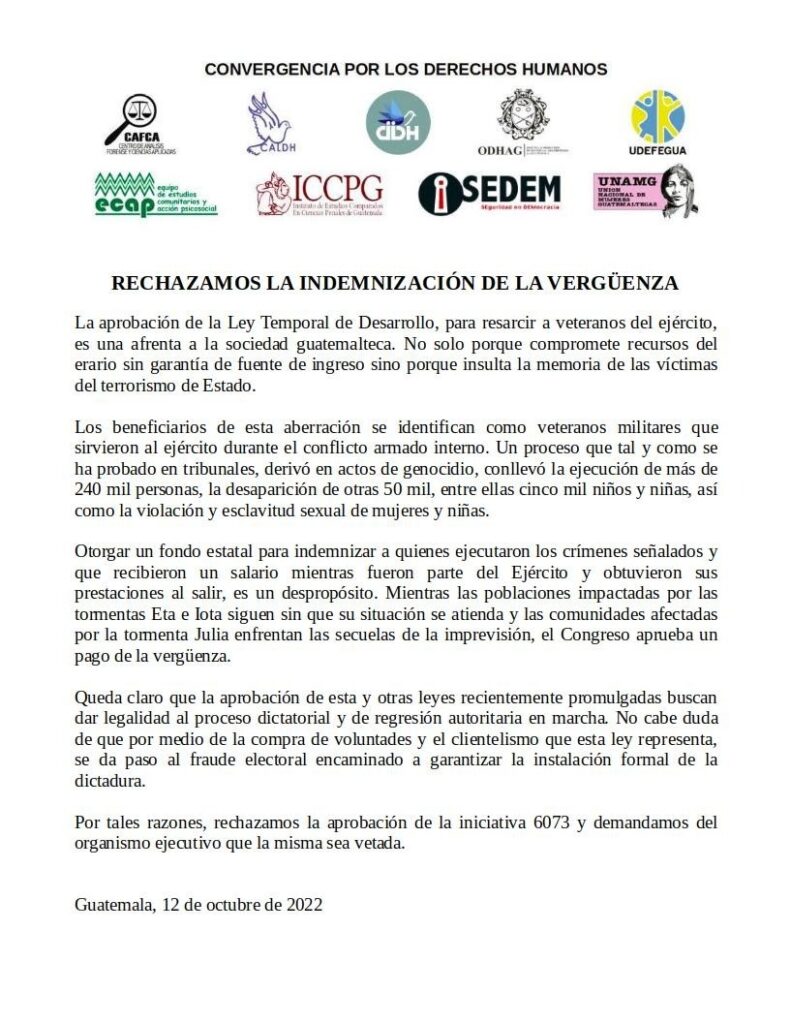