Statement: Survivors of the Internal Armed Conflict reject attempts to shut down SEPAZ

In the midst of an unprecedent health, economic and social crisis caused by COVID19, the Guatemalan government is betting on closing SEPAZ, one of the few institutions that ensures the monitoring and compliance with the Peace Agreements. In this critical context, we stand in solidarity with the victims of the Internal Armed Conflict and echo their demands. 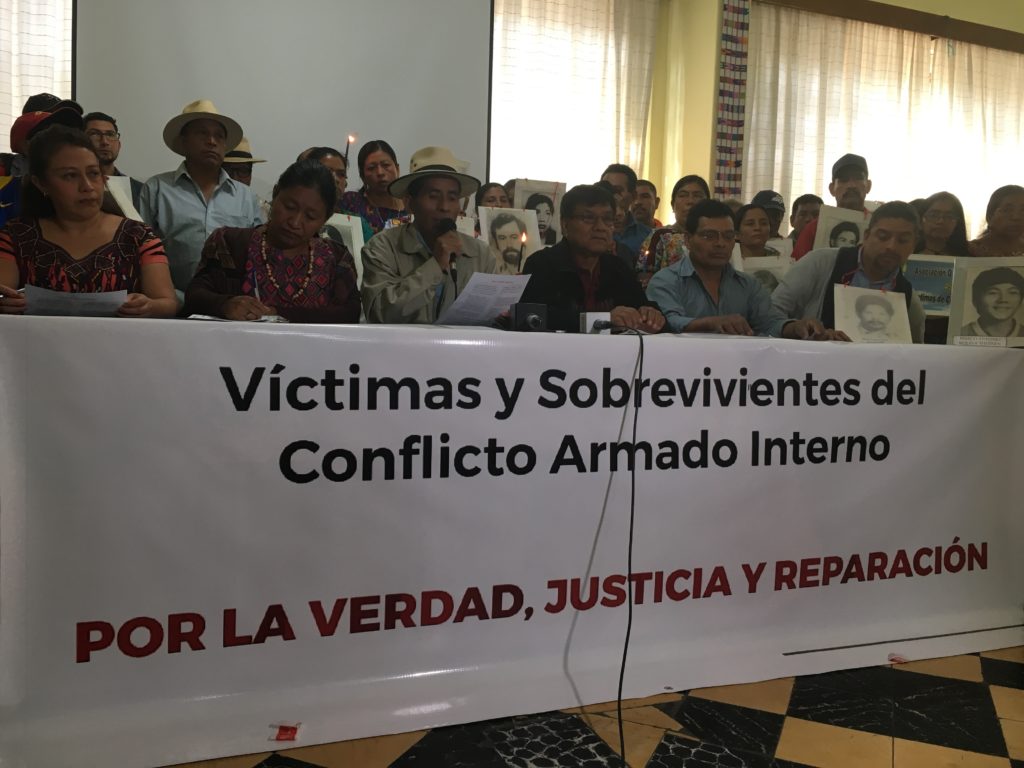 Members of the National Platform of Survivors of the Internal Armed Conflict during a Press Conference on December 2019.

WE REJECT ATTEMPTS TO SHUT DOWN SEPAZ (Guatemalan Secretariat for Peace)

The organizations of victims and survivors of the Internal Armed Conflict reject attempts by some public officials to close the Secretariat for Peace (SEPAZ), the National Compensation Program (PNR) and other institutions that were born as part of the Peace Accords. We understand that the country is facing a serious health crisis due to the spread of the Coronavirus COVID-19, but the solution is not to close or weaken the institutions responsible for fulfilling peace commitments.

SEPAZ and the PNR were created to fulfill the Peace Accords and to compensate damages caused to the victims and communities affected by the violence of the Internal Armed Conflict. Since 2012, both institutions have suffered serious weakening due to the lack of political will of previous governments, the mismanagement of officials and low budgets. However, SEPAZ and the PNR remain important institutions for fulfilling the Peace Accords and ensuring that past atrocities are not repeated.

Therefore, we request the Government of President Alejandro Giammattei appoint as soon as possible the people who will direct SEPAZ and the PNR, since to date he has not named leaders for these institutions. We ask that he appoints capable, honest and experienced people in the field of Human Rights. We also ask that protection of the PNR files be guaranteed, because they contain information on victims of the Internal Armed Conflict, and that the necessary resources be assigned to these institutions to fulfill their mandate.

It is important to remember that the vast majority of victims of the Internal Armed Conflict are elderly people who live in Indigenous communities, who are exposed to the same health and poverty problems as the rest of the population. Therefore, the Government has the responsibility to attend to them and guarantee that their human rights are respected.

Finally, we call on the Human Rights Ombudsman, Human Rights Organizations, and the international community to ensure respect for peace commitments and for the State of Guatemala to fulfill its obligations to the victims and survivors of the serious violations that were committed during the Internal Armed Conflict.

Read the full statement in Spanish: 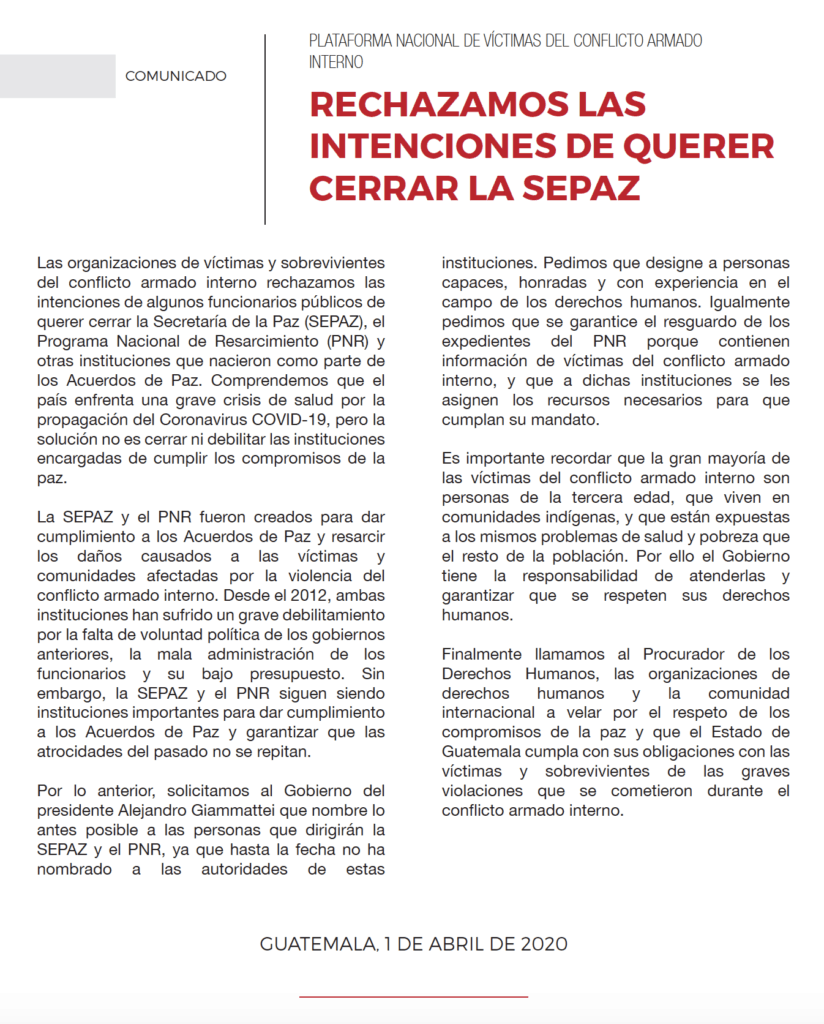 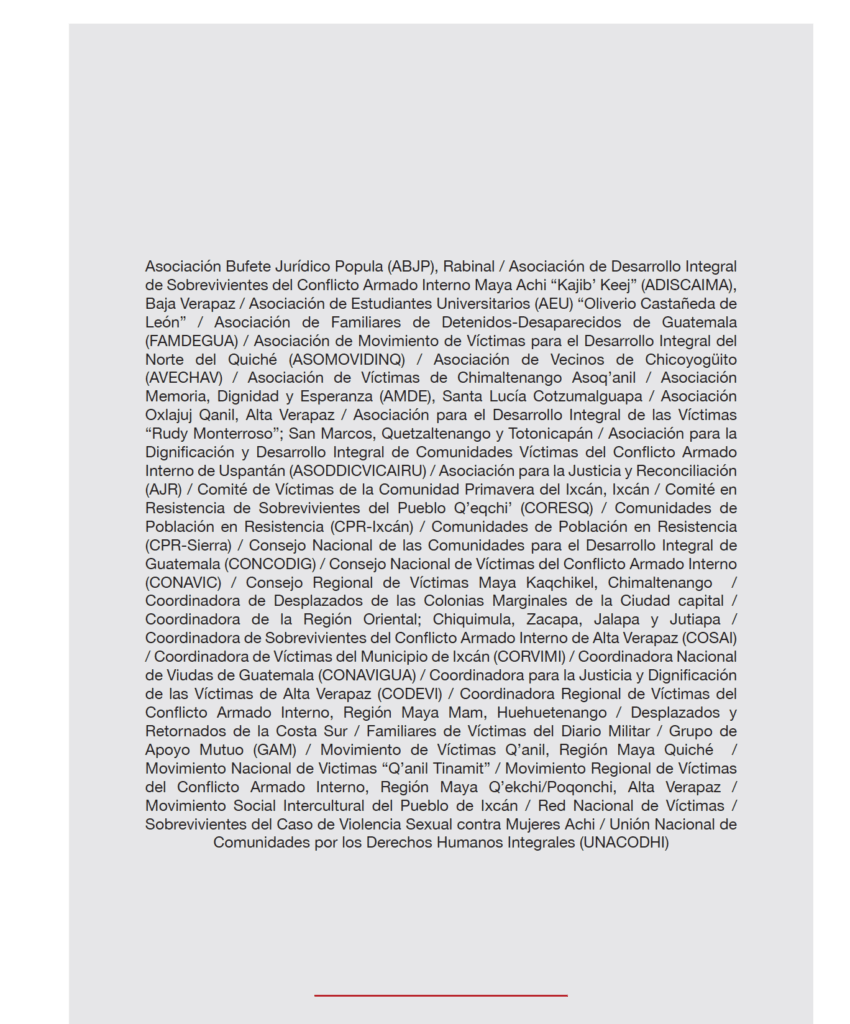