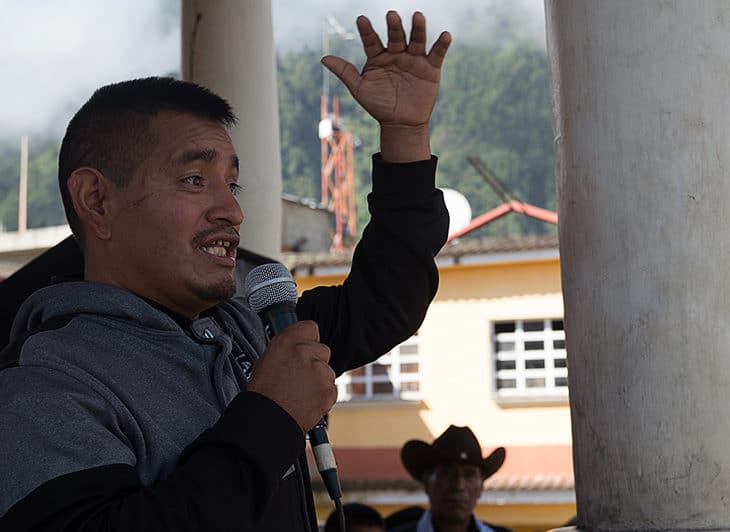 Attorney General of the Republic of Guatemala

Department of the Interior

To whom it may concern:

The undersigned international and national civil society organizations express our deep concern regarding the arbitrary detention of Mr. Julio Gómez Lucas on the night of January 26, 2020. Mr. Gómez is a Maya Chuj ancestral authority and human rights defender, known internationally for his defense of territory and the rights of Indigenous Peoples. His detention, one day after the arrival of Guatemalan President Alejandro Giammattei to San Mateo Ixtatán to announce the immediate implementation of the so-called “Plan for Peace and Security for San Mateo Ixtatán,” is part of a concerning pattern of criminalization and aggressions in the Chuj, Q’anjob’al, Akateko and Popti’ territories in the north of Huehuetenango. According to public information, hundreds of riot police and military personnel arrived in the region in conjunction with the arrival of the president.

At 6:30 pm on January 26th, Mr. Gómez was en route to Chiantla, Huehuetenango when officers of the Special Division for Criminal Investigation (DEIC) of the National Civil Police (PNC), who were following him, crossed his path, almost provoking an accident. Without presenting an arrest warrant, the agents detained Mr. Gómez and took him to the DEIC offices in the capital of Huehuetenango. At 3:50 AM on the 27th, the PNC transported him to the Administrative Justice Center (CAJ) in Santa Eulalia, Huehutenango, under the alleged crimes of instigation to commit crimes, illicit meetings and protests, illegal groupings of armed people, assault, attempted murder, and injury. Just before the first declaration hearing, scheduled for 1 pm, the PNC transported him again to the capital of Huehuetenango, practically without warning. Mr. Gómez has been detained for more than 24 hours and still has not received any additional information about the charges against him.

This is not the first time that Julio Gómez has been the target of aggression as a result of his leadership in defense of territory before the illegal and discriminatory implementation of three hydroelectric dams, property of the company Energía y Renovación, S.A. in the region of Yich’Kisis’ (Ixquisis), in San Mateo Ixtatán, Huehuetenango. In February 2019, Mr. Gómez was kidnapped while he was transporting lumber to the town of Tz’ununkab’ in San Mateo Ixtatán. A group of people from Tz’ununkab’ that support the hydroelectric dam assaulted him, dragged him through the streets, and subjected him to physical and psychological torture. They humiliated him along with his wife and other family members that accompanied him, extorting approximately $7,700 USD from him.

Julio Gómez has always been part of the peaceful and dignified struggle in support of the human rights of the Indigenous people of Guatemala. As part of the Plurinational Ancestral Government Akateko, Chuj, Q’anjob’al, and Popti’, he has maintained his opposition to the implementation of hydroelectric projects in the region. The Plurinational Government has presented two legal demands: one against the Ministry of the Environment and Natural Resources, which is now before the Constitutional Court; and one against the Ministry of Energy and Mines, now before the Supreme Court of Justice, for the approval of environmental and operational licenses for the project “Pojom 2.” The demands are based on the lack of consultation with the Indigenous Maya Chuj people before the installation of the project.

On January 25th, 2020, President Alejandro Giammattei arrived at the capital of San Mateo Ixtatán accompanied by members of his cabinet and the Attorney General of Guatemala to announce the opening of a Public Prosecutor’s office and magistrate’s court, in the presence of representatives of the hydroelectric company Energía y Renovación, S.A. During his visit to the area, the president announced his public support of the so-called “Agreement for Peace and Development in San Mateo Ixtatán Huehuetenango.” The outgoing municipal mayor, government entities, and local entities created by the company that is imposing the hydroelectric project in the microregion of Yich’Kisis put forth this agreement at the end of 2018, which, to their convenience, fabricated total support of the population for the project. The official complaints put forth by the Chuj and Q’anjob’al communities of the microregion of Yich’Kisis’ contradict this supposed support, as these communities have repeatedly rejected this agreement as false and non-representative of their interests as Original Peoples.

As human rights organizations, we demand:

The Guatemalan State has an obligation to protect the human rights and life of the Chuj, Q’anjob’al, Akateko and Popti’ populations in northern Huehuetenango, which are under attack due to the implementation of extractive projects in their territories. It would be disappointing for the international community if a government that recently took power chose to repress members of its own population that disagree with its political priorities. We look forward to prompt response to our concerns and demands.

Network in Solidarity with the People of Guatemala (NISGUA)

Oberlin Students in Solidarity with Guatemala