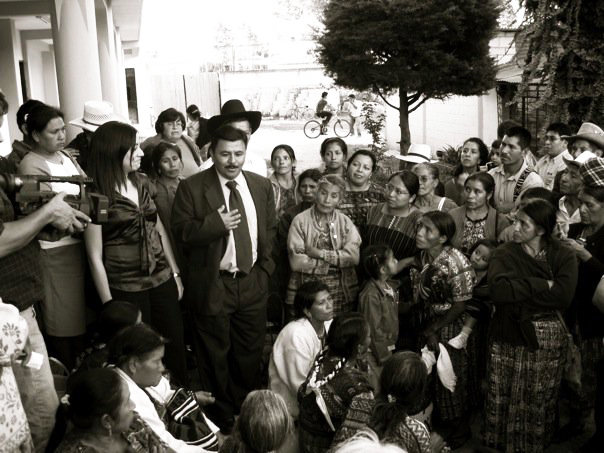 People from the community of Choatalúm meet with human rights lawyer Edgar Pérez as the first case of forced disappearance goes to trial (Credit: Amanda Kistler)

18 Years Seeking Justice in the Courts

By the time prosecutors first launched genocide investigations in 2000, thousands of Guatemalans had already contributed to a UN truth commission that found the state had committed acts of genocide during the Internal Armed Conflict. These survivors were among the first to break the silence about what they had endured under brutal U.S.-backed military governments in the 70s and 80s. Over twenty years later, their courage has multiplied, their stories joined by thousands more in a robust public movement for truth, memory, and accountability.

In the movement’s most public moment, a dictator was convicted of genocide, and the world watched as survivors made history against great odds, winning a verdict that continues to shape the trajectory and meaning of justice in Guatemala and beyond. In NISGUA’s many years accompanying communities in these struggles, we’ve learned that verdicts are neither the end nor the beginning, and no one case tells the whole story.

Long before survivors bring their stories to the courtroom, communities organize to articulate, plan, and carry out their search for justice, knowing that their work will continue long past a trial’s end and that their contribution will live to inform future struggles. Taken as a whole, their organizing reveals the devastating scope of state violence and its many impacts, while highlighting the profound need for healing, memory, and cultural change. Today, we invite you to learn more about how survivors are using a legal system that has often served as a tool of repression to chart the course for deep and lasting transformation.