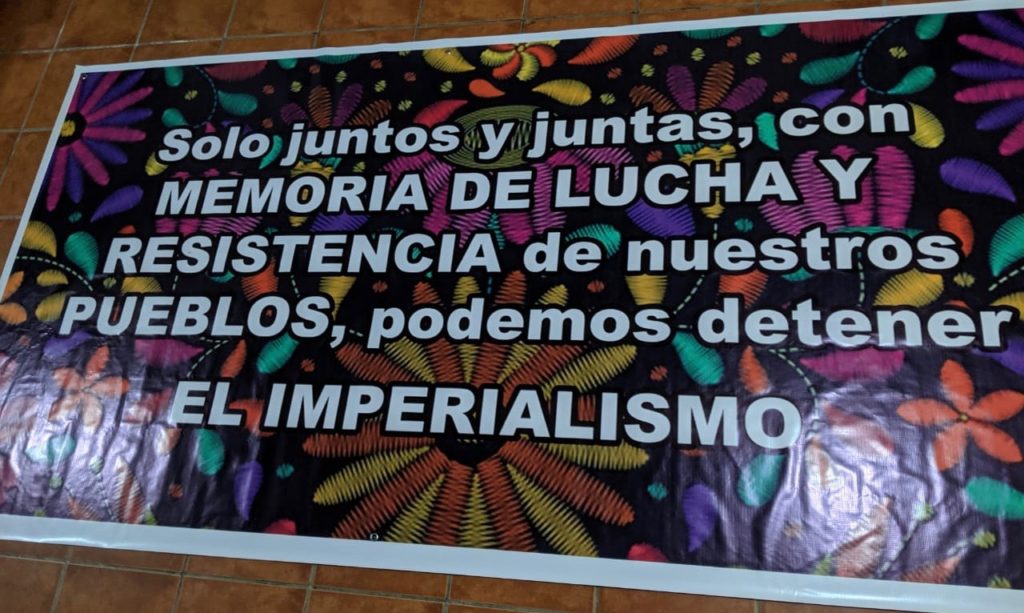 A sign by the ADH reads: “Only together, with MEMORY OF THE STRUGGLE AND RESISTANCE of our PEOPLES can we stop the imperialism.”

Guatemala is a country historically held back; this is a reality that has dragged on since the age of colonization. The routes taken by contraband and customs fraud in the 18th century also show up in a current map of aerial and terrestrial narcotrafficking paths. These similar routes belong to or are defended by powerful groups, local families, leaders, and patriarchs replicated through time and space to control every illegal business that comes from within their borders, especially those of Guatemala and Mexico. These endemic evils that infiltrate the central power appear in recent history as absence of the state and are part of a strategy to maintain the same historical power structure.

It is well known that we are speaking of the families that hold the economic and political power in Guatemala, powers that the United States has historically tried to maintain under its control. For us Guatemalans, the overthrow of the democratic government of Jacobo Arbenz due to U.S. intervention and invasion teaches us that we should oppose all means of intervention that obey those same interests and powers.

Narcotrafficking, migration, and the illegal sale of arms benefit the U.S. It benefits the U.S. that contraband routes continue to exist, but that the flow and prices of the robbed goods remain under its control. What would the financial system of the U.S. be without the millions of dollars that are laundered as a product of narcotrafficking? What would the economic growth of the U.S. be without the support of millions of immigrants without documents who for decades did not receive legal benefits? How much money would the U.S. military stop receiving if it did not sell millions of arms and munitions to Mexico and Central America?

Currently, the Guatemalan government is implementing a combination of military and police forces named GOVERNANCE OPERATION PLAN, which is being developed in the departments of Huehuetenango, Quiché, Totonicapán, Quetzaltenango, Retalhuleu y San Marcos. Simultaneously, the government is buying war planes that cost more than $28 million. Considering this context in our country, we ask ourselves; “is there a war in our country?”

Past invasions fought by geopolitical and geostrategic powers now take on other characteristics but have the same objective: to control the existing illicit powers that today have penetrated all of the Guatemalan state’s structures.

As the People, it’s clear to us that the intentions of the U.S. are not to combat all these evils, but instead to cause a neoliberal wave imposed upon all Original Peoples and all of Latin America.

A month ago, the politicians of the Unites States and Guatemala signed an agreement that consists of four branches:

The first branch refers to the fight against criminal structures that facilitate the migration of people. The second is focused on combatting narcotrafficking, the third is about arms trafficking, and the fourth is to combat money laundering.

In this context, the business sector understands the launch of the Alliance for Prosperity Plan in the Northern Triangle (PAPTN) as a new opportunity to promote its development model. This includes financing highways, electric transportation, and gas transportation to lower the costs of agro-industrial and industrial production in the U.S. Transitional cities appear within this strategy to facilitate the exploitation of natural goods and people. In exchange for this, agreements such as the “SAFE COUNTRY AGREEMENT” have been signed between the U.S. and Guatemala which does no more than turn Guatemala into a DETENTION CENTER for immigrants.

At the core of this, the U.S. is strengthening its military and commercial presence in Mexico, Guatemala, Honduras and El Salvador with the goal of maintaining its hegemony over Central America, advancing towards the invasion of South America, and realizing the imperialist dream of an America for the United States.

The presence of Mexican and U.S. troops, the reappearance of military parades, and the installation of U.S. Border Patrol personnel in Guatemalan territory corresponds to a strategy of military repositioning that goes against the 1996 Peace Accords.

Not one inhabitant of Guatemalan will be safe nor free under these conditions, to the contrary they will be condemned to live in chains.

Due to all the aforementioned information, as the Assembly of Peoples of Huehuetenango (ADH), we energetically condemn the following:

We make the following call:

That the Mayan, Garifuna, mestizo, and Xinka people carry out community consultations of good faith in accordance with their customs and traditions in relation to this military invasion to our territory.

We condemn the military parades as manifestations of force, violence, and impunity given that the Guatemalan army has been the perpetrator of large massacres of the People

Stop the imperialist intervention in our territories

The destruction of our social fabric is our inheritance from U.S. interventionism

Only together, with memory of the struggle and resistance of our Peoples can we stop the empire.

As long as People exist, there will be no invasion