One year later, Xinka land defenders against Escobal mine return to Constitutional Court 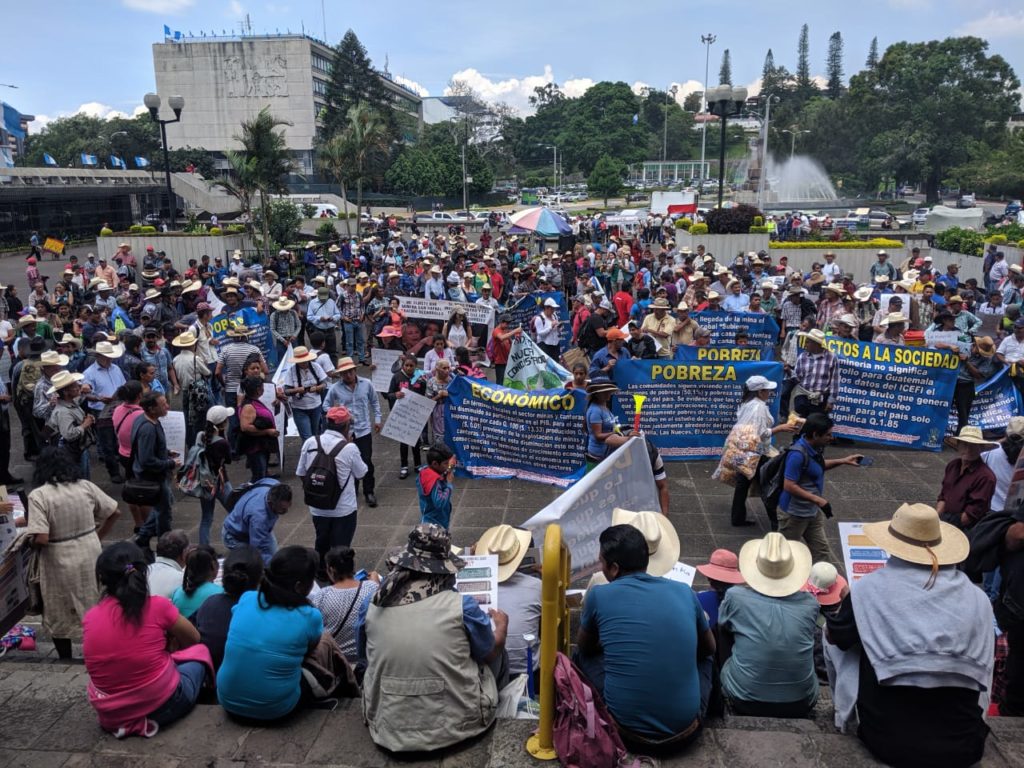 The march begins to form outside of the Supreme Court of Justice. 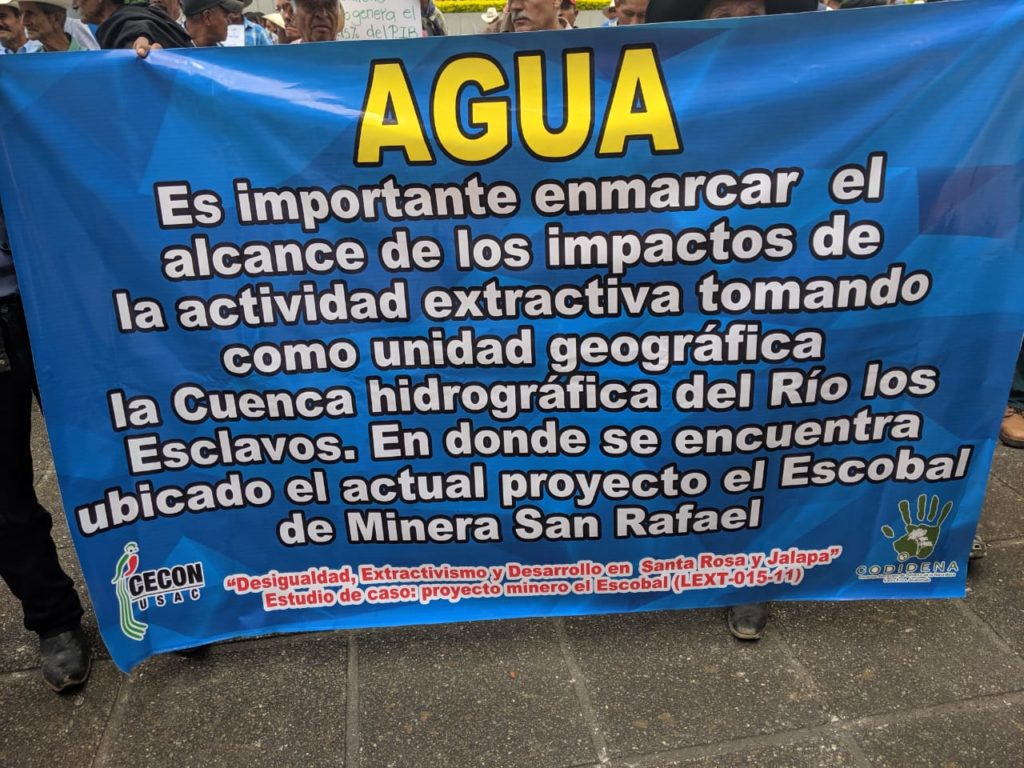 A sign reminds of the negative impact that the mine has on the local watershed.

One year after the historic Constitutional Court (CC) decision that suspended the Escobal mine and ordered a consultation of affected Xinka peoples according to their customs, the Xinka Parliament and the Diocesan Committee in Defense of Nature (CODIDENA) returned to the capital to denounce irregularities and discrimination in the consultation process.

The Guatemalan government’s latest moves to advance the consultation process without the participation of the Xinka Parliament, the elected ancestral authority of the Xinka people, is a violation of the rights of Indigenous peoples and an attempt to water down what should be a meaningful consultation process. At the heart of global movements for Indigenous rights and the full implementation of free, prior, and informed consent are questions of who will be consulted, how they will be consulted, and whether or not their decision will be respected. The Xinka people have shown their desire to have a meaningful consultation, according to their ancestral traditions, in which they can freely express opposition to the Escobal mine and have that decision be respected. However, the Guatemalan government is carrying out a spectacle of a consultation with the ultimate goal of a rubber-stamped social license for the project. Meanwhile, Pan American Silver, owner of the Escobal mine, continues to tell shareholders that it is fully confident that the mine will be back up and running.

In a march that visited the Ministry of Energy and Mines (MEM), the Supreme Court of Justice, and the Constitutional Court, the Xinka people demanded that the consultation process not move forward without representation from the Xinka Parliament and accordance with Xinka customs. The nearly 1500 people marching through the streets of Guatemala City sent a clear message: affected communities will continue to defend their land despite the government’s bad faith attempts to push through an illegal and discriminatory consultation process. 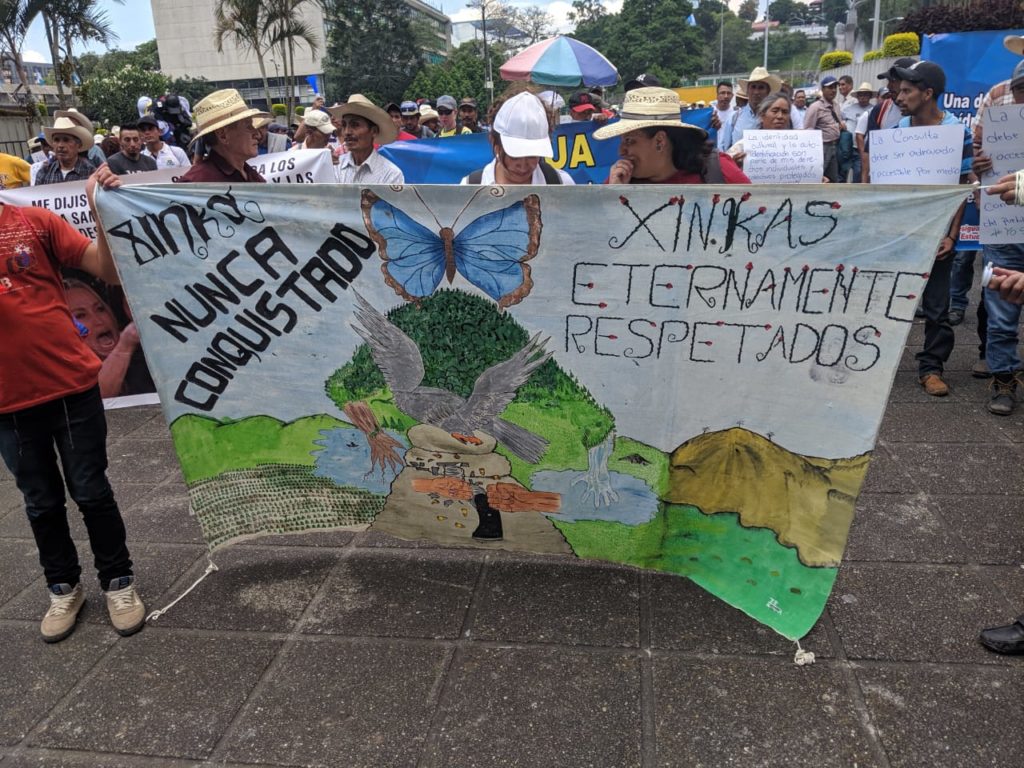 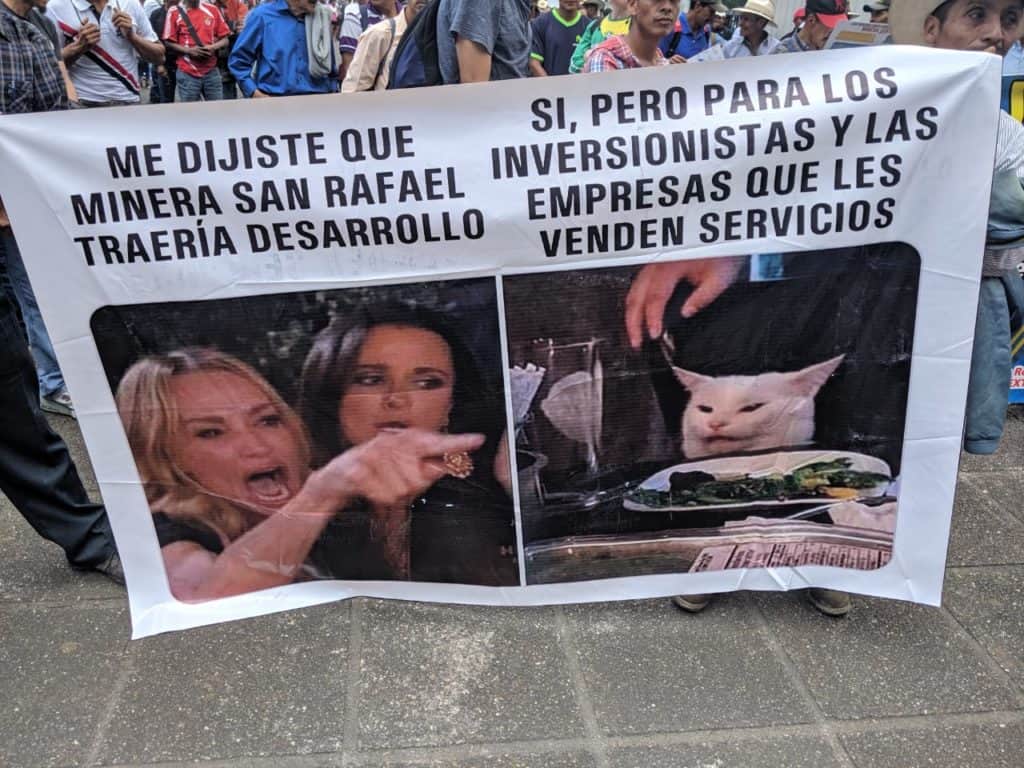 A sign featuring a popular meme reads: “You told me that the San Rafael mining company would bring development! Yes, but only for the investors and the companies that sell you all services.”

Guatemala’s Constitutional Court as a site of resistance

The march ended at a place that many know well: the steps of the Constitutional Court in Guatemala City. For ten months in 2017-2018, members of the Peaceful Resistance of Santa Rosa, Jalapa, and Jutiapa maintained a peaceful sit-in outside the Court, rotating through 24-hour shifts. They demanded that the Court respond to their complaint against the state of Guatemala for the lack of consultation with affected Indigenous Xinka communities. On September 3, 2018, their demand was answered with a historic court ruling which recognized that the rights of the Xinka people had been violated when the Escobal mine was granted a license without the proper consultation of affected communities. The courts ordered that the mine be suspended until the government could carry out such a consultation with affected Xinka people, in accordance with their ancestral traditions.

One year later, the same land defenders that had taken 24-hour shifts outside of the court marched up to a wall of police in riot gear outside the CC. Before the heavily-armed officers, the Xinka Parliament held a press conference in which they shared their concerns about how the consultation is being executed and reaffirmed their dignified and resilient defense of life. The Xinka Parliament statement reads: “Aware of our rights and with hope, we lay the groundwork for Guatemala to develop its consultation process with Indigenous communities. One year after the historical sentence by the honorable Constitutional Court that led to the consultation process, we denounce compliance by the Ministry of Environment and Natural Resources, the Ministry of Energy and Mines, and the Supreme Court.  Indigenous people, on the other hand, have very much complied with the consecrated standards of international instruments related to indigenous rights, the jurisdiction of the system of inter-American human rights, and observations by distinct organizations such as the United Nations.” 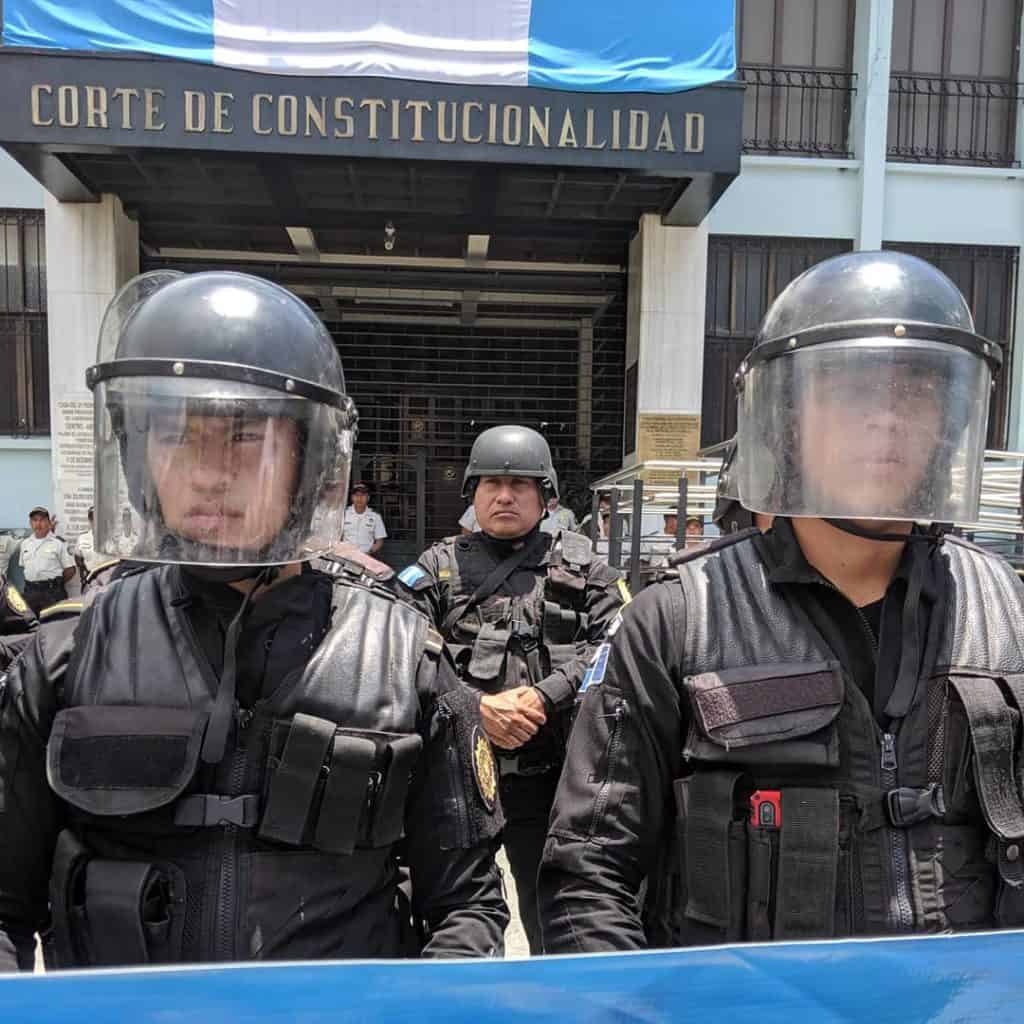 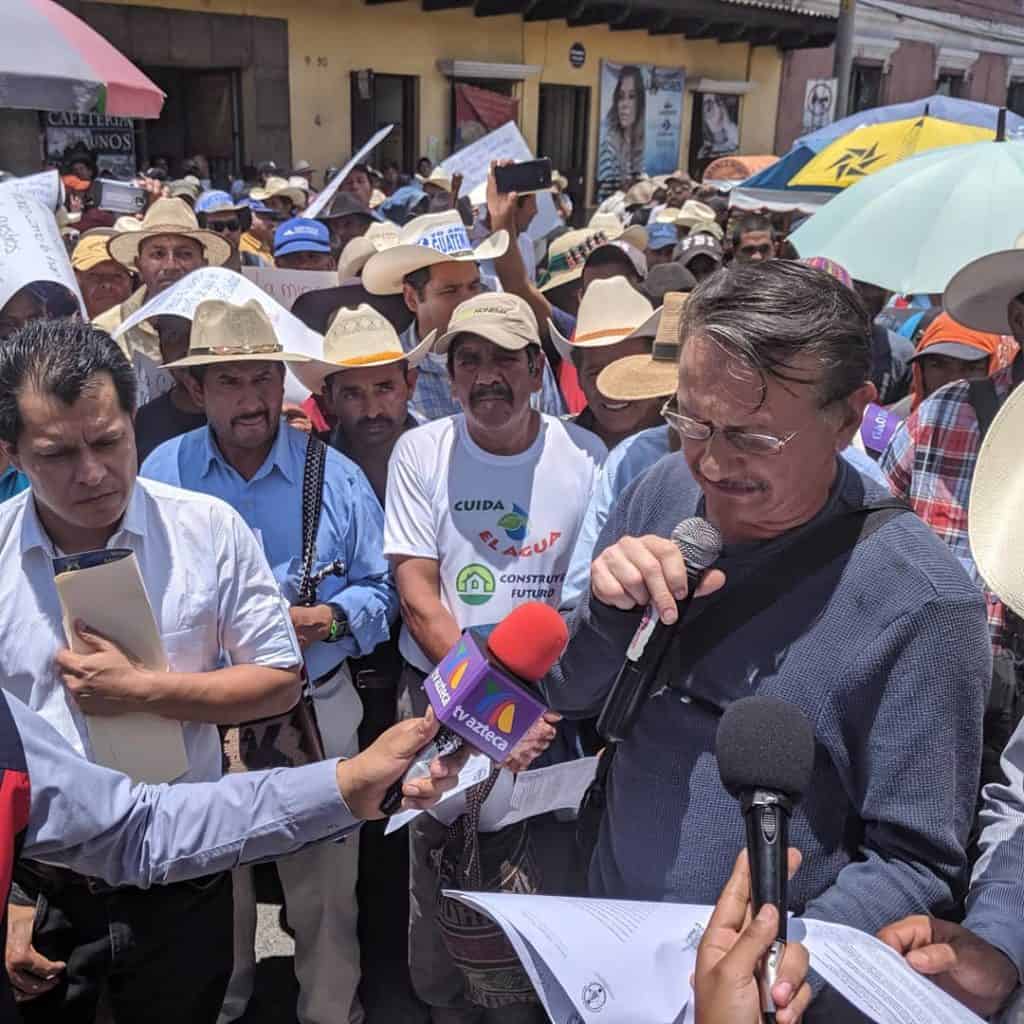 Community leaders read to the Xinka Parliament statement outside of the Constitutional Court.

Irregularities and discrimination in the consultation process

Since October 2018, there have been repeated irregularities that violate the court-ordered consultation process. As the Xinka Parliament writes in their statement, “Over this past year it has become clear that both the Ministry of Energy and Mines and the Ministry of Environment are completely at the service of the San Rafael Mining Company. They have violated the administrative due process and disobeyed a sentence from the Constitutional Court. We are left with a consultation process in which the Xinka people have no opportunity to adequately contribute our opinions.”

Since the CC’s judgement, the Xinka Parliament has raised concerns about procedural errors in the consultation process. Many of these concerns relate to the court-ordered redefinition of the mine’s area of influence, in which the company has pushed to only include the municipality of San Rafael las Flores, where the mine is. The Parliament has consistently been clear that the social, cultural, and environmental impacts of the mine cannot be reduced to a such a small area, much less an area arbitrarily defined by a government map. For the CC decision to be upheld and the rights of Xinka people be recognized, their concept of territory, spirituality, and social organization must also be recognized.

Despite repeated irregularities, MEM and MARN have pushed forward with the consultation process. On August 8 and 29, MEM held meetings with members of local developments councils from only one municipality. On Twitter, MEM claimed that these meetings were the beginning of phase two of the consultation, despite the fact that phase one, the definition of the area of influence, was never completed. What’s more, the Xinka Parliament was not invited to the meetings.

Read more about irregularities and discrimination in the consultation process 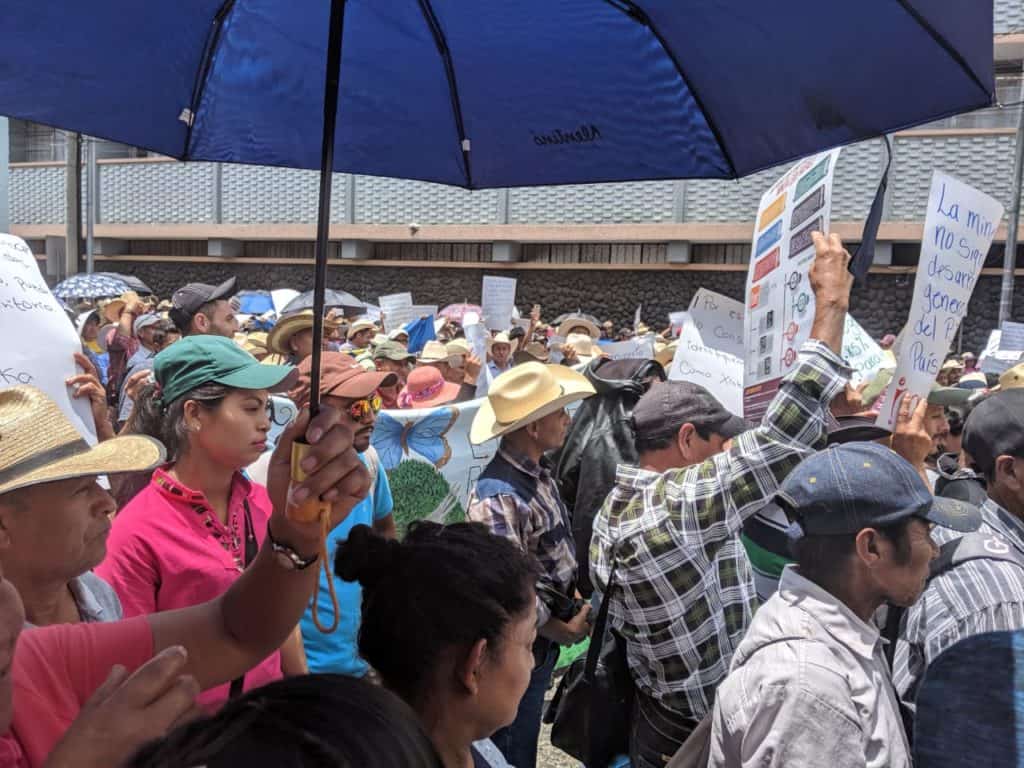 Community members listen to the press conference outside of the Constitutional Court. 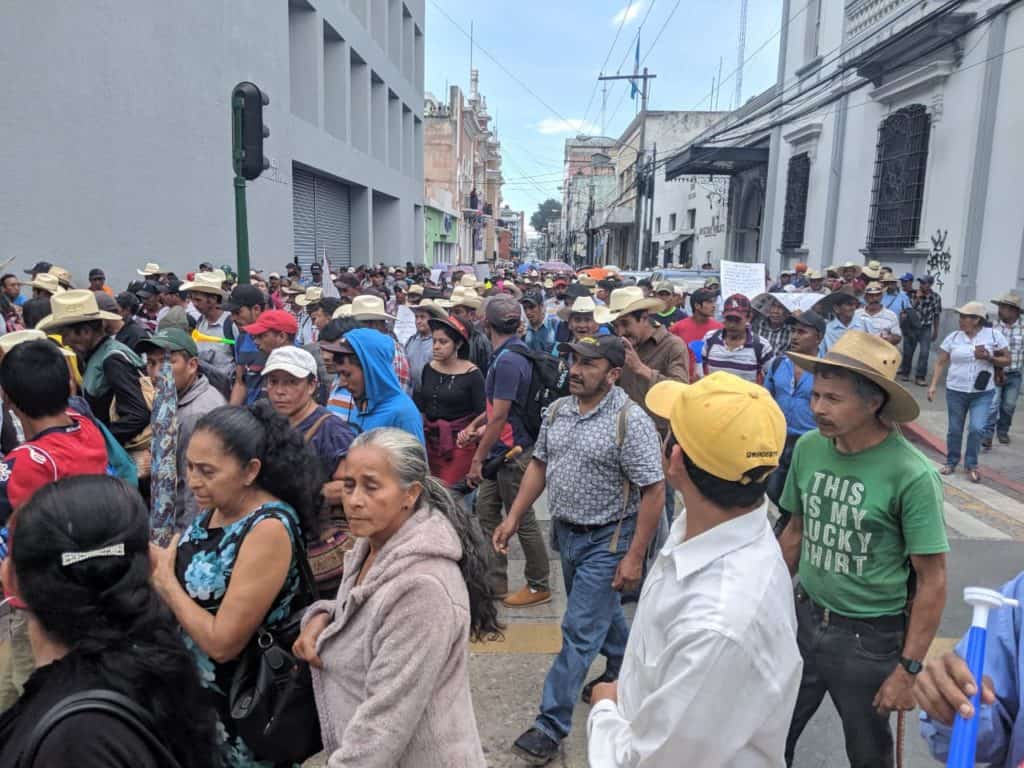 Nearly 1500 people walk through the streets of Guatemala City to denounce the illegal and discriminatory consultation process.

One year since the Constitutional Court decision, eight years since the first community consultations, ten years of resistance

While the one-year anniversary of the Constitutional Court decision brought the land defenders from Santa Rosa, Jalapa, and Jutiapa to the capital, the resistance that they have maintained for nearly a decade is what keeps them organized. They continue to maintain two peaceful check-points that stop mining vehicles from illegally entering the Escobal mine. This summer and fall, local towns have celebrated eight years since they held municipal-organized consultations on this issue, in which over 99% of participants voted against mining in their municipalities.

These original consultations sent a clear message that the impacted communities do not want the mine in their territory, and there is no reason to expect a different decision in the new consultation. The Guatemalan government’s actions, with the tacit support of Pan American Silver, violate the court-ordered terms of this new consultation–yet another affront to the rights of Xinka people.

For ten years, people have organized to defend their water, territory, and life, and they continue in struggle. As the Xinka Parliament writes in their statement, “We will not allow our rights to be trampled on, nor the Constitutional Court sentence to be violated…We will mobilize to ensure compliance with this sentence as many times as it is necessary.”