As the nine of us sit, crowded into the small meeting room on stools and cushions, it is slowly getting hotter. The projector churns out warm air and sustains a hypnotic hum as we watch the rivers and mountains of the Quiché region scroll by on the white wall. Our Google Earth satellite-view tour of the hydroelectric projects planned, constructed, and half-constructed on the region’s many rivers is stretching into its second hour. Our guest points out massacre sites and old military bases as he traces the paths of river systems that stretch from Mexico into the Cuchumatanes, the mountain range in the western highlands of Guatemala where much of the state violence during the internal armed conflict was concentrated.

We are having our day-long team meeting, to which we’ve invited M, an organizer with People’s Resistance, a macro-regional coalition of communities in resistance to extractivism in Quiché, San Marcos, Huehuetenango, and the southern coast. As a collective, People’s Resistance also works on recuperating historical memory of the internal armed conflict and promotes Indigenous autonomy.

As he goes, M tallies up the hydroelectric projects planned by Italian energy company ENEL and those the government’s National Electricity Institute (INDE) built. He passes over the site of the Xalalá Dam, a project planned by the INDE on the River Chixoy that NISGUA’s partner ACODET has successfully resisted for over a decade. He also scrolls by sites of newly planned hydroelectric projects, rich green expanses that show no evidence of the threat against them. He tells us about these places and the rumors that encircle them, about the legal acrobatics that the company is doing to avoid having to hold a consultation with the affected communities, and about the trajectory of a highway that would connect one river (and its many hydros) to a transformer on the other side of the region. 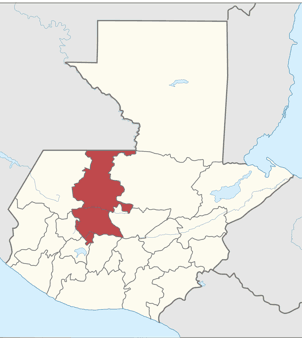 In our expansive meeting with M, everything I have been learning about the connections (both geographic and ideological) between the internal armed conflict and the wave of extractivist megaprojects in Guatemala crystalizes with great intensity. In the same places where the army and armed civil patrols committed massacres in the 1980s, Indigenous and campesino communities in Quiché face the threat of another type of violence disrupting their relationship to the greatest life force there is: water.

Meanwhile, I am reading Naomi Klein’s book This Changes Everything, about the necessity to rethink and redesign a world outside of capitalist logic in order to stop climate change. In it, she talks about the worldview of extractivism:

“a nonreciprocal, dominance-based relationship with the earth, one purely of taking. It is the opposite of stewardship, which involves taking but also taking care that regeneration and future life continue. Extractivism is the mentality of the mountaintop remover and the old-growth clear-cutter. It is the reduction of life into objects for the use of others, giving them no integrity or value of their own—turning living complex ecosystems into “natural resources,” mountains into “overburden” …It is also the reduction of human beings either into labor to be brutally extracted, pushed beyond limits, or, alternatively, into social burden, problems to be locked out at borders and locked away in prisons or reservations. In an extractivist economy, the interconnections among these various objectified components of life are ignored; the consequences of severing them are of no concern.” *

This quote immediately makes me think of rivers. On the one hand, there is the understanding that companies like ENEL have of a river: a source of energy that can be harnessed, converted, and sold for a profit. On the other, there is a river’s place in the practical and spiritual life of the community that lives near it—in the case of Quiché, mostly Mayan communities for whom water is a sacred source of life that connects all living beings. Isolating the river’s money-generating potential from the ecosystem that it forms a vital part of is a reduction of life into an object for the use of others. The effects of severed connections when a river is diverted, flooded, or otherwise manipulated to be milked for its energy will ripple out, inevitably, through networks of human, plant, and animal life.

A piece of wisdom shared by many Guatemalan land rights defenders is the conviction that everything is connected; accordingly, the movement challenging corporate-led extractivist “development” is organized at a regional and national level. At the People’s Resistance regional assembly, for example, representatives of communities from at least four departments periodically gather to coordinate their actions and share news with one another.

The idea of a regional assembly made up of many smaller collectives has parallels with Maya Q’eqchi’ concepts of home, family, and community (though not all the groups in People’s Resistance are Q’eqchi’—among them are also Mam, Q’anjob’al, Chuj, and others). In Q’eqchi’ language, junkabal is the name for home, but includes within it the air, plants, animals, land, water, food, house, and people who make up that home. K’olibal is the space shared by several homes, several junkabales, and tinimit is the town, village, or city, made up of various k’olibales. These layers sum to the tinimit, the town of towns, where the smaller collectives, inter- and intra-connected themselves, come together.

The regional assembly happens at the level of the tinimit, and only works when the k’olibal and the junkabal talk and share within themselves to bring their collective experiences, opinions, and proposals to the wider regional space. This framework for understanding the world pays attention to connections between immediately local and widely regional scales, and uses those common experiences as points of departure for action. Each community’s relationship to their river or their environment has a place in the assembly, and at the macro level they mobilize this local knowledge into a regional response.

In February at the People’s Resistance regional assembly, the representatives had a discussion about how they were experiencing climate change in their lands. Many referenced the drying up of rivers and droughts that damaged their coffee, corn, bean, and cardamom crops. In May, at a smaller meeting, delegates from Quiché worked on answering the following questions in groups: 1. What changes is climate change causing?; 2. How is pollution affecting us?; 3. What changes have we seen in relation to our water?; 4. What do you think could be done to slow or stop climate change?

As they shared their conclusions, the delegates began creating a climate history (or “climate memory”) of their respective homes, recording how the timing of the rainy season and the colder season have become less predictable, how the level of the rivers has dropped this year, and how wildfires have become more frequent.

Many types of actions can result from these spaces. In the past, People’s Resistance has challenged the licenses of hydroelectric projects, held press conferences to denounce human rights violations committed by energy companies, and communicated with the UN through a climate change researcher—an experience that prompted one delegate to reflect: I don’t know how to tell the UN representative that the water is like my mother. At this May meeting, though, the delegates propose reforestation projects, consciousness-raising around littering, initiatives to keep land in the hands of community members, and contacting schools, churches, and ancestral and state authorities to coordinate on these projects.

An important thing to know about Q’eqchi’ language is that it does not contain subject-object relationships. Unlike in English and many other languages, there isn’t an active subject that acts on a passive, receiving object, but rather a world full of subjects that have relationships with each other. If I say in Q’eqchi’ “I place a glass on the table,” the glass and the table and I are all participants in that action in equal measure. Verbs don’t have a one-way directionality, but indicate something happening between two or more subjects. In a language that gives a river the same agency that humans have, it makes little sense to view it as a passive resource to be extracted from—instead, it follows to consider it a key member of a life-giving reciprocal relationship.

This is where I come back to Naomi Klein. In light of Q’eqchi’ subject-subject relationships and the integration of local and regional contexts in People’s Resistance, I am thinking about how all of this is the opposite of extractivism. Klein writes that extractivism is “a nonreciprocal, dominance-based relationship with the earth, one purely of taking” and that in an extractivist economy, “the interconnections among… various objectified components of life are ignored.” People’s Resistance’s climate change activism is based in a wholehearted rejection of the premises of extractivism, valuing and responding to interconnectedness and understanding their relationship to the environment as one of reciprocity.

It’s scary to recognize how logical extracting, dominating, and taking can come to seem when our grammar sets us up to see our relationships to everything in those terms. This calls for imagining outside of the power dynamics built into our language, following the lead of Indigenous organizers like People’s Resistance. In her book, Klein quotes Arundhati Roy:

“If there is any hope for the world at all, it does not live in climate-change conference rooms or in cities with tall buildings. It lives low down on the ground, with its arms around the people who go to battle every day to protect their forests, their mountains and their rivers because they know that the forests, the mountains and the rivers protect them. The first step towards reimagining a world gone terribly wrong would be to stop the annihilation of those who have a different imagination—an imagination that is outside of capitalism as well as communism. An imagination which has an altogether different understanding of what constitutes happiness and fulfillment. To gain this philosophical space, it is necessary to concede some physical space for the survival of those who may look like the keepers of our past, but who may really be the guides to our future.”

Note: I didn’t have the space to go into the effects of climate change on migration, but it connects so deeply to the droughts and unpredictable weather patterns that are now widespread in Central America that I feel like I need to make space for it here. I’m linking resources that illustrate how food insecurity related to climate change is a major push factor for migration from Guatemala to the US: here’s a letter about a family fleeing the mortality caused by crop failure in Huehuetenango, an article about the effects of drought in Chiquimula, a video that ties together the climate change factors for migration from the western highlands, and an article about Juan de León Gutierrez, a Guatemalan teen who migrated because of climate change and died on April 30 after being apprehended by US Border Patrol.