“Our Struggle Has Become Reality”: Former Dictator Rios Montt is Charged with Genocide

Thursday, January 26, 7:00 am, hundreds of community activists and human rights defenders gather outside Guatemala City’s national court to witness former dictator Efraín Rios Montt testify on the gross military atrocities and human rights violations that occurred during his de-facto presidency from 1982 to 1983.   In solidarity, thousands more both in Guatemala and internationally intently follow the live coverage broadcasted over social media sites. 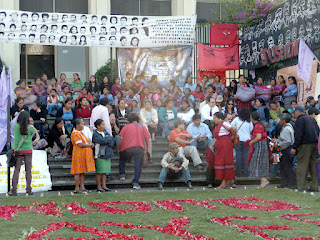 For more than twelve hours that day, rural families, victims and survivors of the military’s merciless scorched earth campaign, stood alongside urban human rights activists as the trial was live-streamed into the plaza outside: the vibrant colors of traditional indigenous dress blending seamlessly with the vivid backdrop of urban graffiti of resistance. New generations joined the survivors in the plaza, demonstrating the breadth of political resistance that has persisted for more than thirty years, since the height of the internal armed conflict.  As the crowd waited, hip-hop followed Mayan prayers, which followed live poetry from the crowd.

One survivor stated, “What we want is to see justice because though

[Rios Montt] may deny it, he was the one who organized and ordered our execution. We are here today to hear him testify about all that occurred in ’82. We are here for all of our family members who have disappeared.”  Ríos Montt maintained his right to remain silent in the court that day, but he was forced to listen to the accounts of human rights abuses committed in the highlands under his rule, and survivors finally had the opportunity to see him before a judge.