“As a part of the general army staff and the national defense staff, you had knowledge and willingness to destroy the civil noncombatant population of the Maya Ixil ethnic group.”

The prosecutors of the Human Rights office of the Attorney General’s office opened the accusation against Luis Enrique Mendoza García with this phrase. García served as Chief of Operations (G3) for the general army staff during the de facto government of Efraín Rios Montt from 1982-1983.

During the first day of hearings of the intermediate phase of the Ixil Genocide case, the lead prosector presented evidence that shows the responsibility of the accused for crimes of genocide and crimes against humanity committed against the noncombantant population of the Maya Ixil ethnic group.

The accused is charged with having participated in the planning, coordination, supervision, and control of the Victoria 82 campaign plan with its annexes and appendices, the campaign plan ‘firmeza 83-1’, and the Sophia operation plan, having given assessments and recommendations within his field duties.

The actions taken by the accused in his field duties were instrumental for members of the Guatemalan army to develop military and psychological operations against the civil noncombatant population, and took place during the time in which the accused fulfilled the related positions, leading to, at the very least:

The death of members of the Ixil group and other Mayan peoples residing in the Ixil region known as the municipalities of Santa María Nebaj, San Gaspar Chajul, and San Juan Cotzal of the Quiché department.

Interrogation through threatening acts, intimidation, physical and psychological aggression, beatings, and other acts of torture against the civil noncombatent population located in the Ixil region in order to obtain information and emotionally break the constituents of said ethnic group and to generate terror among the population.

Negatively affecting the property and assets of the civil noncombatant population located in the Ixil region by stealing of goods, furniture, clothing, work tools, animals, money, and other belongings, as well as the burning and destruction of crops, houses, ceremonial centers and milling stones.

Sexual violence against girls, women, pregnant women, and elderly women was used as a weapon of war that corresponded with negative widespread, systematic and prolonged patterns, given that the women were under the power of the members of the Guatemalan army.

The transfer of children from the Maya Ixil ethnic group to other cultural groups who were taken as trophies of war, as well as the creation of a concentration of numerous children in the camps for displaced refugees. Some of these minors were taken outside of their cultural reality by soldiers of the Guatemalan army.

The Attorney General’s office completed its reading of the accused. The next hearing will take place on February 3 at 9:00 am in the High Risk Court C under the charge of Judge Silvia de León, where the plaintiffs of the case, Association for Justice and Reconciliation – AJR – and CALDH will take a stand.

YES THERE WAS GENOCIDE IN GUATEMALA 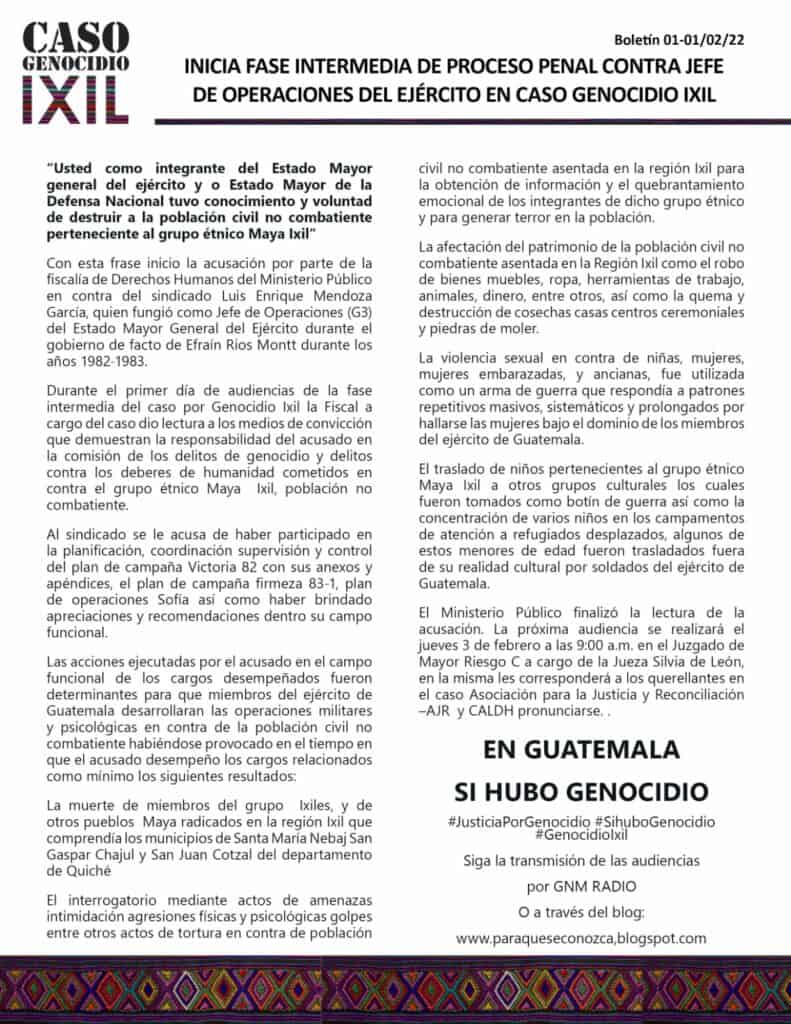