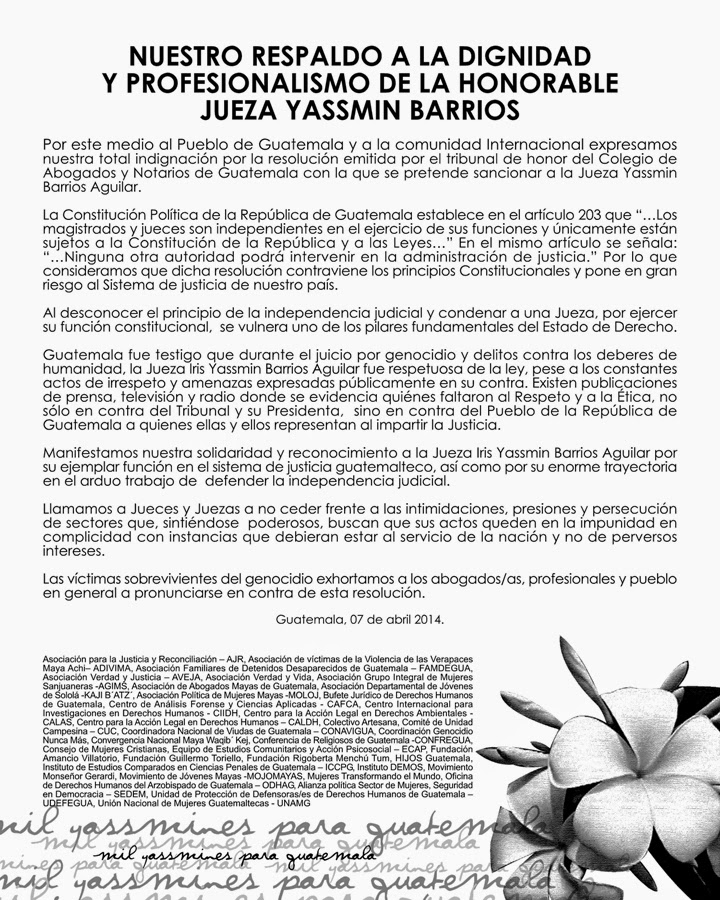 OUR SUPPORT FOR THE DIGNITY AND PROFESSIONALISM of HONORABLE JUDGE YASSMÍN BARRIOS
To the people of Guatemala and to the international community, we express our total indignation of the decision emitted by the ethics tribunal of the Guatemalan Bar Association that attempts to penalize Judge Yassmín Barrios Aguilar.

The Political Constitution of the Republic of Guatemala establishes in Article 203 that “The magistrates and judges are independent in carrying out his or her duties and are subject only to the Constitution of the Republic and the Law…” In the same article it indicates that: “No other authority can intervene in the administration of justice.” We thus believe that the above-mentioned decision [of the Bar Association] goes against the Constitutional principles and puts the Guatemalan justice system at great risk.

By ignoring the principle of judicial independence and condemning a judge for exercising her constitutional duty, one of the fundamental pillars of the Rule of Law is made vulnerable.
Guatemala bore witness that during the trial for genocide and crimes against humanity, Judge Yassmín Barrios Aguilar was respectful of the law, despite the constant instances of disrespect and threats publicly expressed against her. Newspaper, television and radio publications provide evidence of who lacked respect and ethics, not only for the court and its presiding judge, but also for the people of the Republic of Guatemala, to whom justice is rendered.
We express our solidarity and recognition of Judge Yassmín Barrios Aguilar for her exemplary service to the Guatemalan justice system, as well as her long trajectory and hard work in defense of judicial independence.
We call on all judges to not give in to the intimidations, pressures and persecutions from sectors which, feeling powerful, want their actions to remain in impunity, and therefore seek the complicity of institutions that should be at the service of the nation and not [at the service of] perverse interests.
The victims and survivors of genocide urge lawyers, professionals and the general public to speak out against this resolution.
Guatemala, April 7, 2014.
Association for Justice and Reconciliation – AJR, Association for the Integral Development of the Victims of Violence in the Vera Paz Provinces, Maya-Achí -ADIVIMA, Families of the Detained and Disappeared of Guatemala – FAMDEGUA, Truth and Justice Association – AVEJA, Truth and Life Association, Sanjuaneras Women’s Association – AGIMS, Maya Lawyers Association of Guatemala, Departmental Association of Youth from Sololá -KAJI B’ATZ’, Political Association of Maya Women – MOLOJ, Human Rights Law Office of Guatemala, Center for Forensic Anthropology and Applied Sciences – CAFCA, International Center for Human Rights Research – CIIDH, Center for Environmental and Social Legal Action – CALAS, Center for Human Rights Legal Action – CALDH, Collective Artesana, Campesino Unity Committee – CUC, National Coordination of Widows – CONAVIGUA, Genocide Never Again Coalition, National Convergence Maya Waqib’Kej, Religious Confederation of Guatemala – CONFREGUA, Christian Women’s Council, Community Studies and Psychosocial Action Team – ECAP, Amancio Villatorio Foundation, Guilermo Toriello Foundation, Rigoberta Menchú Tum Foundation, HIJOS Guatemala, Guatemalan Institute of Comparative Penal Studies – ICCPG, DEMOS Institute, Monseñor Gerardi Movement, Maya Youth Movement – MOJOMAYAS, Women Transforming the World, Security and Democracy – SEDEM, The Human Rights Defenders Protection Unit – UDEFEGUA, National Guatemalan Women’s Union – UNAMG
nisgua_admin2019-12-27T18:26:22+00:00April 9th, 2014|Genocide Trial, Justice and accountability|