In the early hours of the morning, a crowd had already begun to form in Guatemala City’s Plaza of Human Rights, outside the Supreme Court, where the country’s historic first trial for genocide was about to commence. Survivors of genocide and human rights advocates arranged a ceremonial carpet of flowers, pine needles, and candles, burning fragrant incense, while supporters of the accused former dictator Ríos Montt and retired intelligence official Rodriguez Sánchez held white banners with slogans denouncing the trial as a “lynching”. 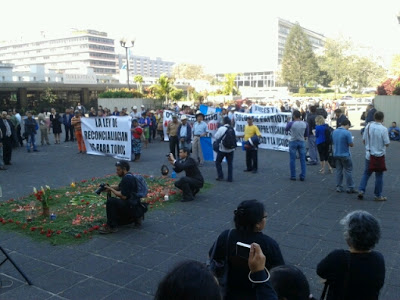 The opening of the trial was delayed an hour due to a last minute shake-up: immediately before the opening of the trial, Rios Montt announced that he had replaced his defense lawyers. Instead he would substitute Francisco García Gudiel, a lawyer with a long history of cases defending impunity, including a relative of Rios Montt for an assault against Rigoberta Menchú, and on behalf of 150 people arrested for the 2003 “Black Thursday” riots organized by Montt’s FRG party in support of his illegal presidential bid. After unsuccessfully arguing that the trial should be delayed for 5 days so that Gudiel could familiarize himself with the case, Gudiel argued that his conflicts with Judge Yasmin Barrios in past litigation meant that the Judge should be removed from the proceeding, a potentially illegal and clearly premeditated maneuver also intended to delay the opening of the trial. In response, Judge Barrios ordered García Gudiel to leave the courtroom, and ordered that Rios Montt be represented by César Calderón, lawyer of co-defendant Rodriguez Sanchez. Judge Barrios proceeded to read the long list of charges against the two retired military officials who both declined to make a statement in response to the accusation.

Following a recess for lunch, Judge Barrios immediately proceeded to call the prosecution’s witnesses to the stand. Nicolás Bernal Brito was the first Ixil genocide survivor to detail his experience before the court, the audience of hundreds, and the accused. In Spanish and Ixil, with the help of an interpreter, he described the killing of his family members by uniformed soldiers in the massacre of 35 people in the village of Canaquil on March 5, 1982. After destruction of his village, Brito fled into the mountains of Quiché. Survivors collected and buried bodies burned by the soldiers, but were too terrorized to perform rituals for the dead. Later, while living under military control, Brito was obligated to participate in the Civil Defense Patrols (PAC) and ordered to destroy crops, alongside Ixil children as young as 12 years old who were also forced into the paramilitary patrols. He told of how people living in the Guatemalan military’s Model Viollages were “punished” by soldiers who imprisoned them in a muddy pit. Brito was cross-examined by the defense lawyers, who among other questions asked if he understood what the term “exhumation” meant and if he had attended one; Brito answered affirmatively to both questions.

The second prosecution witness called was Bernardo Bernal, also from Canaquil. He described how on March 25 1982, at the age of 9, soldiers came to his community and detained his family, shooting at him as he fled. Hiding in a stream, he witnessed the deaths of his father, mother, and siblings aged 5 and one. His testimony concluded the day’s proceedings, without questions from the defense. Nicolás Bernal Brito and Bernabe Bernal were the first of more than 100 surviving witnesses who will give their testimony in the coming days.
NISGUA’s coverage of the trial will continue tomorrow. Follow our live coverage via Twitter @NISGUA_Guate and join the campaign in support of justice for genocide in Guatemala!