NISGUA continues live coverage of the trial in Guatemala of Efraín Rios Montt and Mauricio Rodríguez Sánchez for genocide and crimes against humanity.

The Association for Justice and Reconciliation (AJR) represents the witnesses and survivors of Guatemala’s genocide and are co-plaintiffs in the case against Efraín Ríos Montt and José Mauricio Rodríguez Sánchez. For more than a decade the survivors have struggled for the opportunity to have their case heard in a court of law. The last 20 days of public oral debate in the genocide trial have demonstrated to the world their unwavering commitment to truth and justice. Below we share some of their reactions to the day’s proceedings.

Yesterday I was very happy because we were close to having the sentence. Unfortunately, the Courts of Justice have stomped on the constitution. They change the laws to fit their needs; they do whatever they want with them, whatever they crave. But right now I feel excited because the lawyers are not saying that we will stop here. We have to move forward with the struggle until the end. This is not going to be just half way finished.

For me it was difficult because this situation should not take place in court. They are judges that know the law and they are violating our rights as victims. They are trying to invalidate everything we are presenting, the evidence and the entire phase that we have already gone through, as if they do not appreciate anything we have presented. But I think that the judge is playing a dirty game. It is illegal and she does not have legal arguments. The decision was illegal.

[The judge] doesn’t want to uphold the law and that is why we totally reject this decision. [The judge] only wants to help impunity continue to reign in Guatemala and that is why we as victims have to break this noose of impunity, this beast that for so long has ruled Guatemala. We want the judge to uphold the law so that it may strengthen the rule of law in Guatemala so that we can have a different kind of country, a real democracy.
-Member of the AJR

They want the [the process] to be annulled, but that is not how it is. In no moment will [the process] be annulled. I start to think that it is embarrassing for them because they are lawyers. Imagine! They have the law in their hands and they jump right over everything that has to do with us, the indigenous. They jump over it. They don’t want to touch it.

The thousands and thousands of victims will never abandon this struggle. We have to see it through.

There are multitudes of victims by my side demanding that I speak out for justice and so I am going to speak out. In no moment will this [struggle] be abandoned. We have already made huge strides…

I thank the people from other countries that are here surrounding us. I thank them. We are not alone because there are people that are supporting us.

–Woman survivor and member of the AJR 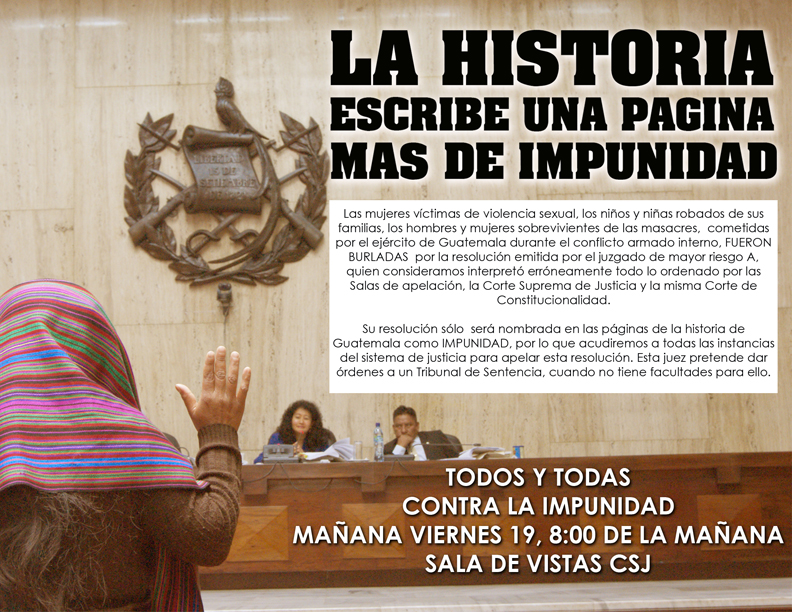 Statement by the Center for Human Rights Legal Action (CALDH), the lawyers representing the AJR and co-plaintiffs in the case

The women victims of sexual violence, the children stolen from their families, the men and women survivors of the massacres committed by the Guatemalan army during the internal armed conflict, WERE MOCKED, by the resolution issued by the Judge of the First Court for High Risks Crimes “A”, who we consider to have erroneously interpreted all of the decisions issued by the Appeals Court, the Supreme Court and the Constitutional Court.

Their resolution will be named in the pages of Guatemalan history as IMPUNITY, which is why we call on all of the bodies of the justice system to appeal this decision. This judge is attempting to give orders to the Trial Court, when she does not have the authority to do so.

NISGUA has provided human rights accompaniment to the witness’ organization, the Association for Justice and Reconciliation, and their lawyers, the Center for Human Rights Legal Action since 2000. We will continue to bear witness to the truth and bravery of these survivors throughout this historic trial. To bear witness with us, stay tuned to our ongoing live Twitter coverage @NISGUA_Guate, like our Facebook page and sign up for email updates.