Efraín Ríos Montt, the U.S.-supported dictator who ruled at the height of Guatemala’s civil war, has been called to testify in the genocide case on January 26.  As of January 14th, Ríos Montt stepped down from his position in the Guatemalan Congress and no longer can argue congressional immunity for charges against him. 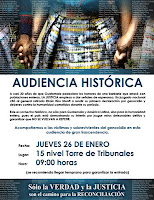 Regardless of the outcome of the hearing tomorrow, the fact that the former general has been called to testify represents a huge step forward for the survivors and legal advocates that have tirelessly worked this case for 11 years.

In mid-December Ríos Montt and his lawyers visited the offices of the Public Prosecutor’s Office to ask for information regarding investigations against him, declaring that he is in good health and has no intention of evading charges. “There is a list of those accused of genocide and my name is on it,” he said, “I don’t want my arrest to be a spectacle, like in a movie, I will appear in court if I am cited.”

On January 27th, the First Court for High Risk Crimes is set to determine whether Ríos Montt will face charges in the national genocide case brought by the Association for Justice and Reconciliation (AJR) and the Center for Human Rights Legal Action (CALDH). The Rigoberta Menchú Tum Foundation has called for Ríos Montt’s arrest to face charges in the international genocide case under investigation by the Spanish courts.  Ríos Montt is the subject of an outstanding international arrest warrant issued by Interpol.

In a hearing on January 5th, Judge Carol Patricia Flores declared the suspension of legal proceedings against former head of state Oscar Humberto Mejía Victores, accused of responsibility for genocide and crimes against humanity committed by the Guatemalan military during his tenure as Minister of Defense for the Ríos Montt regime.  Both state-appointed and independent medical experts have found that Mejía Victores is unable to speak due to a stroke; Judge Flores ordered that his health be examined every 30 days, with the case to be re-opened if his health improves.  The Court had previously ruled to allow Mejía Victores to be detained under house arrest rather than at the Military Hospital in Guatemala City.

José Mauricio Rodríguez Sánchez, director of the “D2” military intelligence branch under Ríos Montt, was expected to stand trial for genocide and crimes against humanity starting January 31st, however his trial is likely to be delayed due to injunctions filed by his lawyers. Similarly, the process against Hector Mario López Fuentes, Army Chief of Staff under Ríos Montt, is stalled pending the resolution of an appeal filed by the AJR and CALDH to reinstate Judge Carol Patricia Flores.

For more analysis on developments in the struggle for justice and against impunity, see the article “One Step Forward, Two Steps Back : Challenges to the Justice System as Historic Cases Advance” on our website.