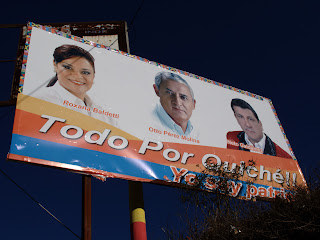 On November 6, Guatemala’s presidential elections ended in a close victory for retired General Otto Pérez Molina. Pérez Molina’s Patriot Party has promised an iron fist approach to security in the face of rising crime and international drug trafficking. Carrying a majority in urban and Eastern departments, Pérez Molina won 54% of the vote. With a populist discourse merging social promises with extremist stances on security and taxation, his opponent Manuel Baldizón of the LIDER party won a slight majority in the western highlands, the south coast, and his native department of Petén.

The Patriot Party administration would be the first since the 1986 transition from dictatorship to civilian government to be headed by a former military officer. In the mid 1980s Pérez Molina served as a commanding officer in the hard-hit Ixil region of the Quiché department, carrying out the Guatemalan military’s brutal counterinsurgency campaign. As director of military intelligence during the 1990s, he is implicated in torture and disappearances, including the case of Efraín Bámaca. Pérez Molina has denied allegations of participation in human rights abuses and paints himself as a reformist within the military, highlighting his role in negotiating the 1996 Peace Accords.  (For more information about Pérez Molina’s history, see Annie Bird’s commentary for Rights Action, as well as “El acenso del General,” an excellent article published in Guatemala’s El Periodico newspaper.)

Pérez Molina’s military career has raised strong concerns amongst civil society and human rights organizations. His administration will have the power to support or to block ongoing reforms of the justice system, the state’s collaboration with the U.N. International Commission Against Impunity in Guatemala (CICIG), and the precedent-setting human rights cases that have advanced under the leadership of Attorney General Claudia Paz y Paz. Pérez Molina has publicly stated that he does not believe the Guatemalan military is responsible for genocide.

Among Pérez Molina’s first acts as President-elect was to announce nominations for several key government ministries. Mauricio López Bonilla, a former military intelligence officer and Patriot Party campaign manager, will head the Interior Ministry, charged with implementing security policy, police reform, and counter-narcotics efforts. Alejandro Sinibaldi, failed Patriot Party candidate for mayor of Guatemala City, will serve as Minister of Transportation, Infrastructure and Housing, a strategic post in charge of lucrative state contracts. Francisco Arredondo was named for head of the Ministry of Health, which has been at the center of a bitter struggle between the Guatemalan Congress and health workers’ unions over insufficient budgets and deteriorating conditions in the public health system.

Despite having the largest block in Congress, Pérez Molina’s administration will not enjoy enough of a majority to pass legislation without seeking alliances with other parties. His administration faces a budget crisis precipitated by his party’s refusal to approve international loans destined for health, education, and the justice system, as well as climate change mitigation, and initiatives against tax evasion. In addition to his promises to improve security, Pérez Molina has expressed his support for international investment in the mining and energy sectors, which may bring his government into conflict with communities which have organized to defend indigenous territory, natural resources, and self-determination. He has also committed his government to continue popular social programs which offer basic material support to impoverished families.

Pérez Molina’s security proposals include the establishment of inter-agency task forces which will increase collaboration between police forces and the military. According to the Wall Street Journal, Pérez Molina “would welcome U.S. troops to battle drug gangs” in Guatemala. Ironically, human rights and security analysts have linked Pérez Molina and the Patriot Party to criminal organizations and military mafias. Meanwhile, the long-term involvement of members of the Guatemalan military in organized crime raises serious doubts about the institution’s role in counter-narcotics and anti-crime operations.

As powerful local movements for justice and indigenous rights continue to grow, the attention and accompaniment of the international community will be crucial during the coming four years.