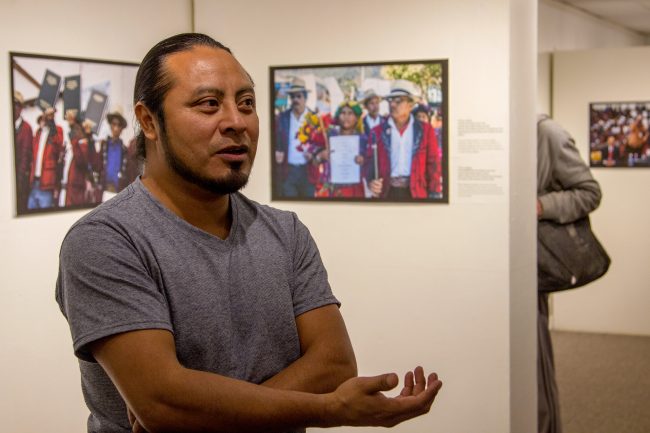 Documentary photographer Roderico Y. Diaz talks about the exhibit, “Defending Truth and Memory: The Path Towards Justice in Guatemala,” at the University Museum at Kent Hall on Feb. 1. (Photo by Maggie Adams / Kokopelli)

The photo exhibit “Defending Truth and Memory: The Path Towards Justice in Guatemala” opened at the New Mexico State University Museum on February 1, 2018. It captures the strength and beauty of Indigenous peoples in Guatemala and their fight for justice for the atrocities they have faced. In 2013, former Guatemalan de facto dictator José Efraín Ríos Montt was found guilty of genocide and crimes against humanity. Just 10 days later, the sentence was overturned and the case was sent to retrial. In April, 2018, Ríos Montt died facing a retrial.

Roderico Y. Díaz is a contributing photographer to this collection gathered by Guatemala’s Center for Human Rights Legal Action (CALDH), a co-plaintiff in the genocide trial against Ríos Montt. This is the first time that this exhibit has been printed and displayed in the United States. On opening night, Roderico Y. Diaz spoke about his experiences documenting the survivors of genocide and the struggle of Indigenous communities as they defend their identifies, natural resources, and rights to land and territory.

Media from the exhibit launch in New Mexico

Michael Hernandez for KRWG/NRP: Pursuing Justice for the Victims of Guatemalan Genocide

It has been called the “Silent Holocaust,” but its survivors are unafraid to speak out. More than 20 years after Guatemala’s civil war ended in 1996, civilians are still advocating for justice after the genocide that killed hundreds of thousands of Maya people. Guatemala’s military launched a campaign targeting Maya, claiming they were allies to guerrilla forces known as the Guatemalan National Revolutionary Unity.
Read the full transcript.

(Photo by Maggie Adams for Kokopelli)

February in Las Cruces marks the celebration of For the Love of Art Month. With galleries holding openings downtown and events happening throughout town all month long, New Mexico State University is celebrating with art exhibits and openings of its own.

On Feb. 1, students, faculty and members of the Las Cruces community came to Kent Hall on the NMSU campus to enjoy the opening of “Defending Truth and Memory: The Path Towards Justice in Guatemala,” a photo documentary exhibit by photojournalist Roderico Y. Diaz. This exhibit shows how the indigenous people of Guatemala are fighting for justice following the genocide of their people in the 1980s. 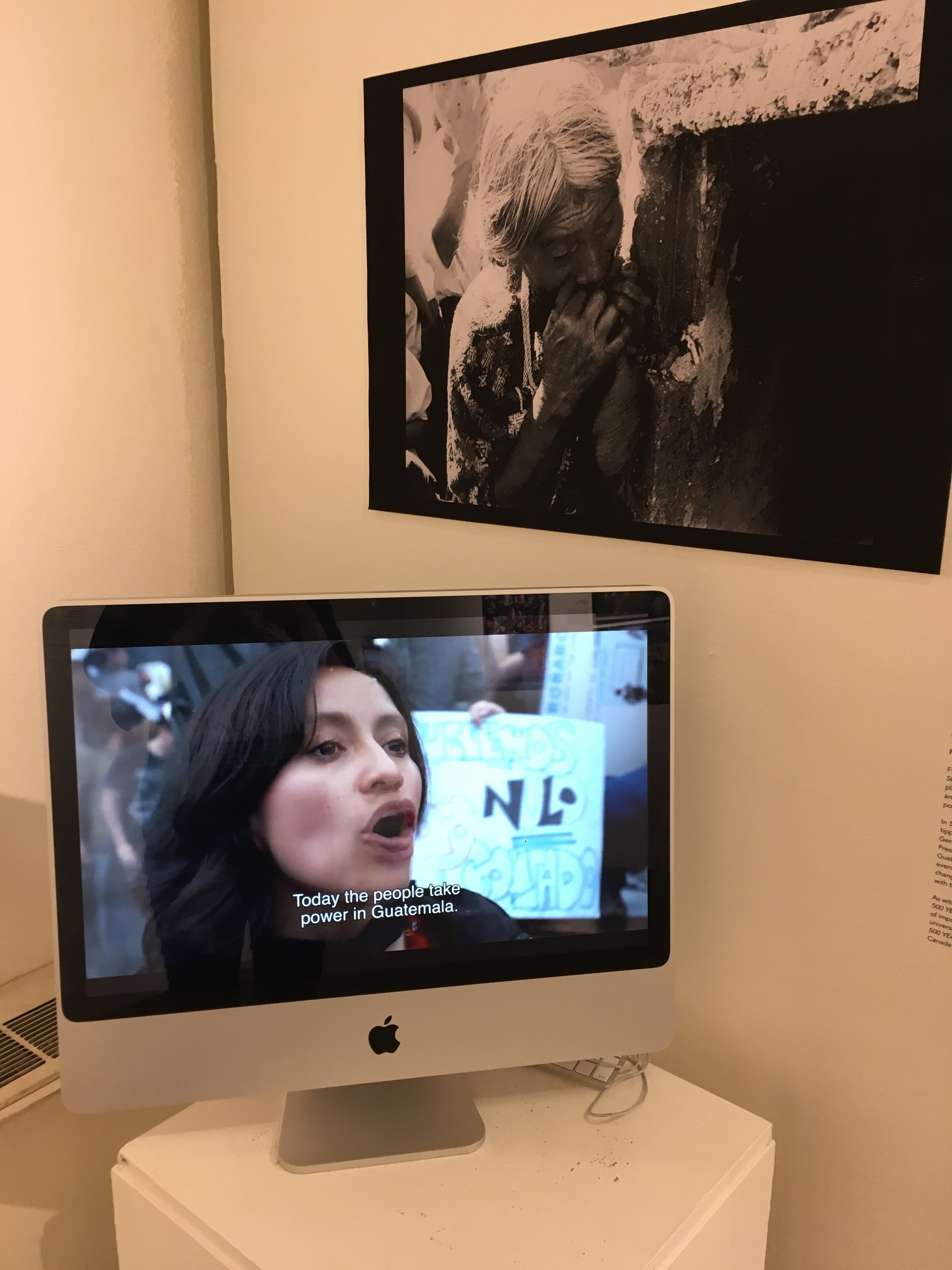 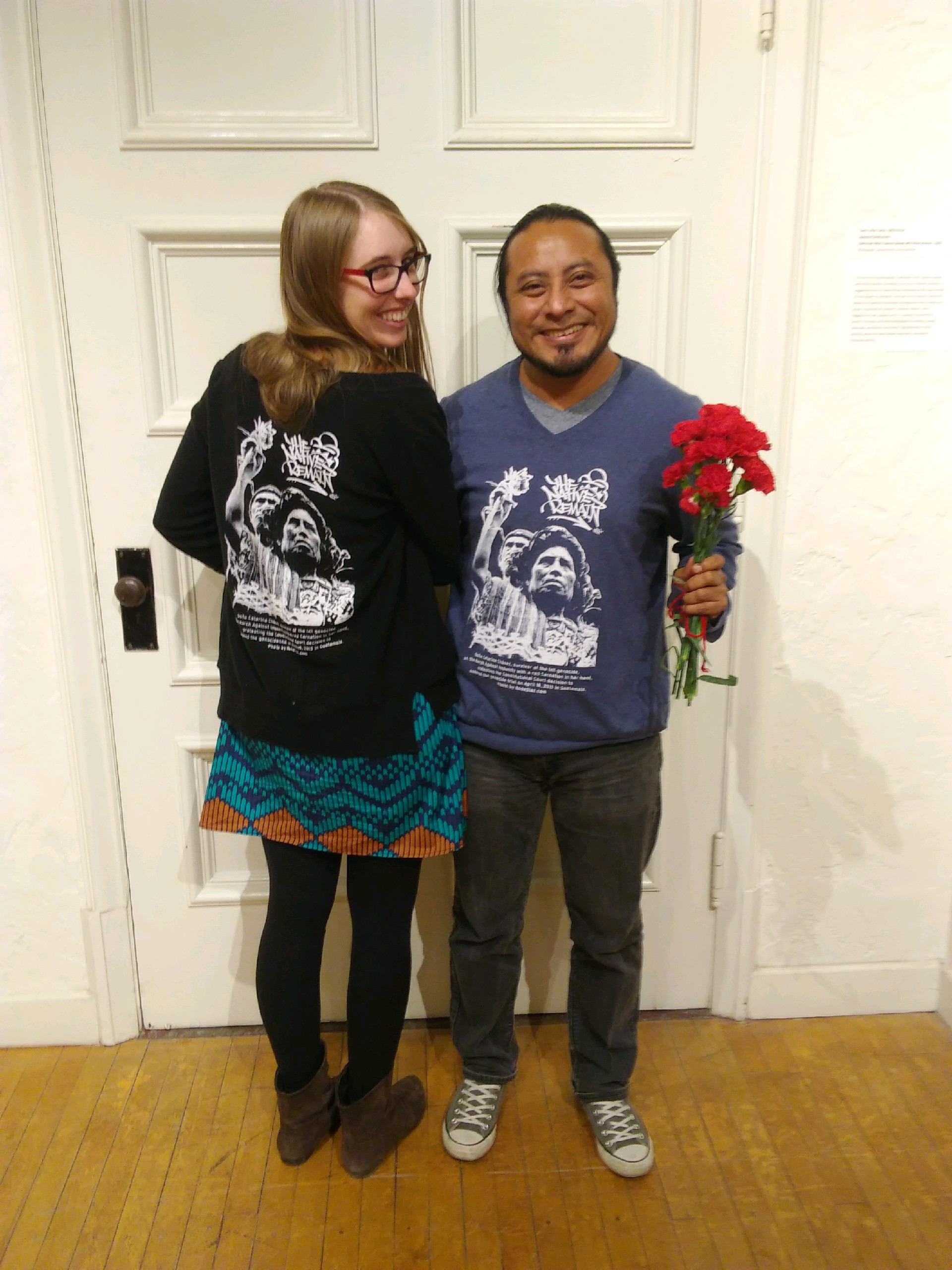 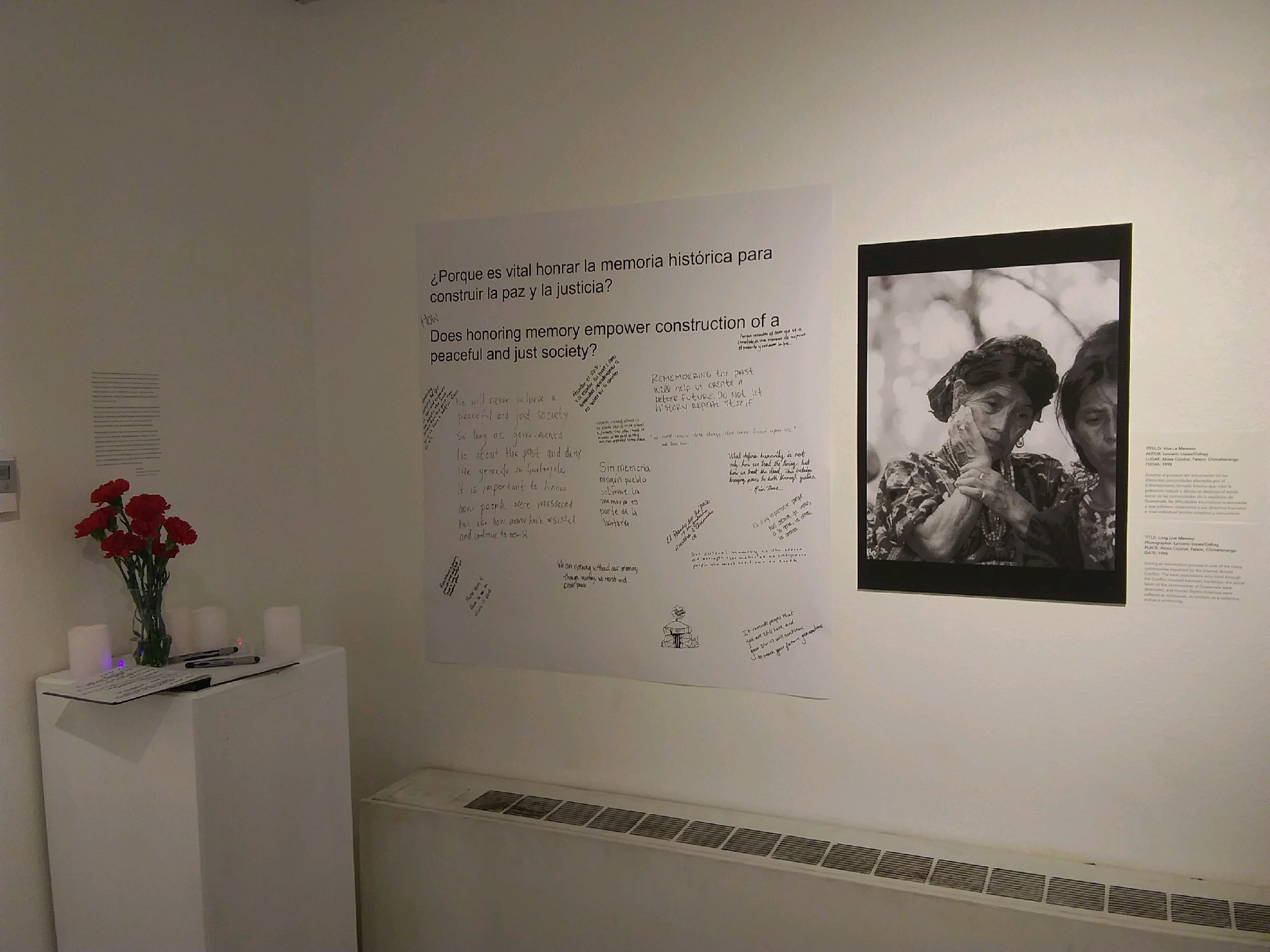 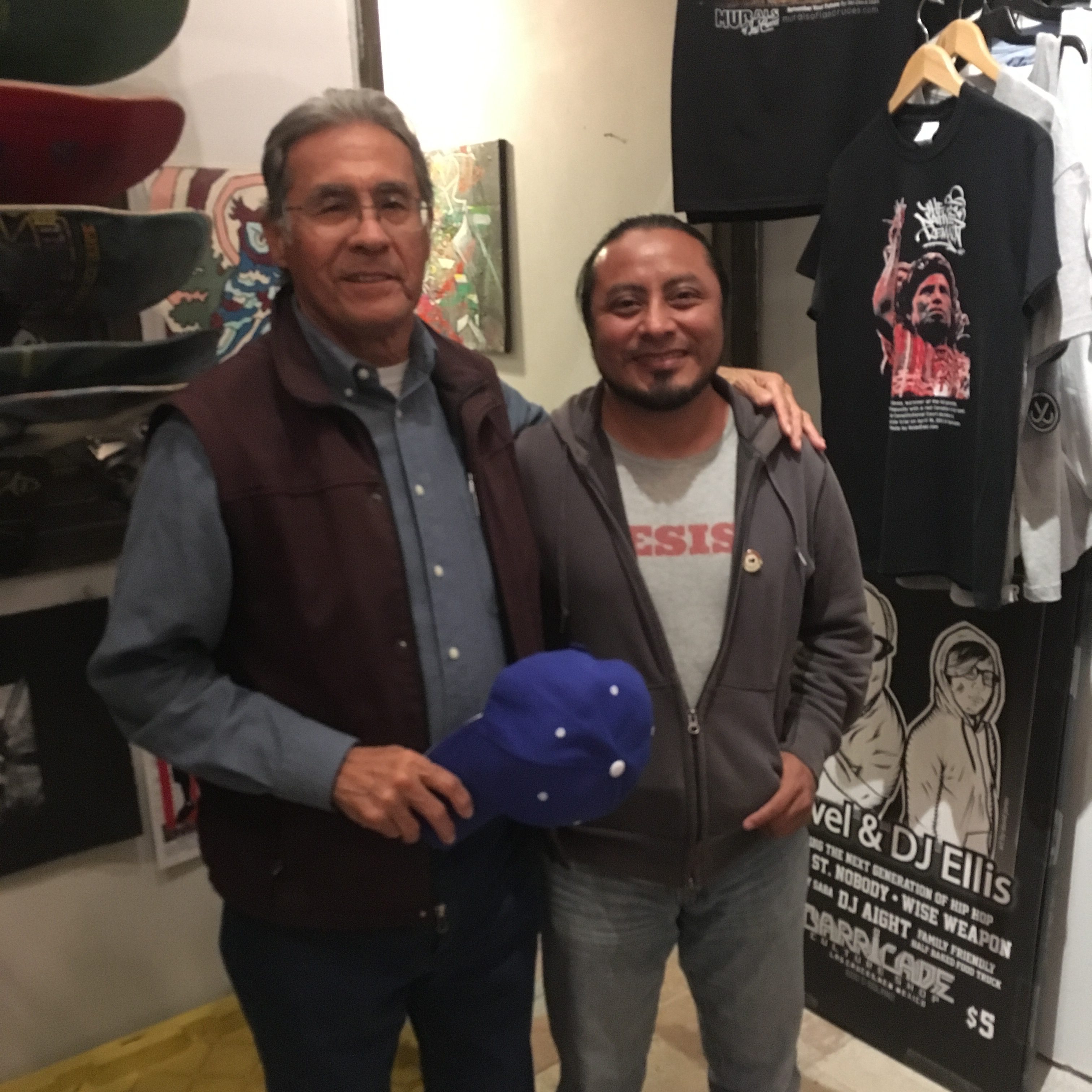 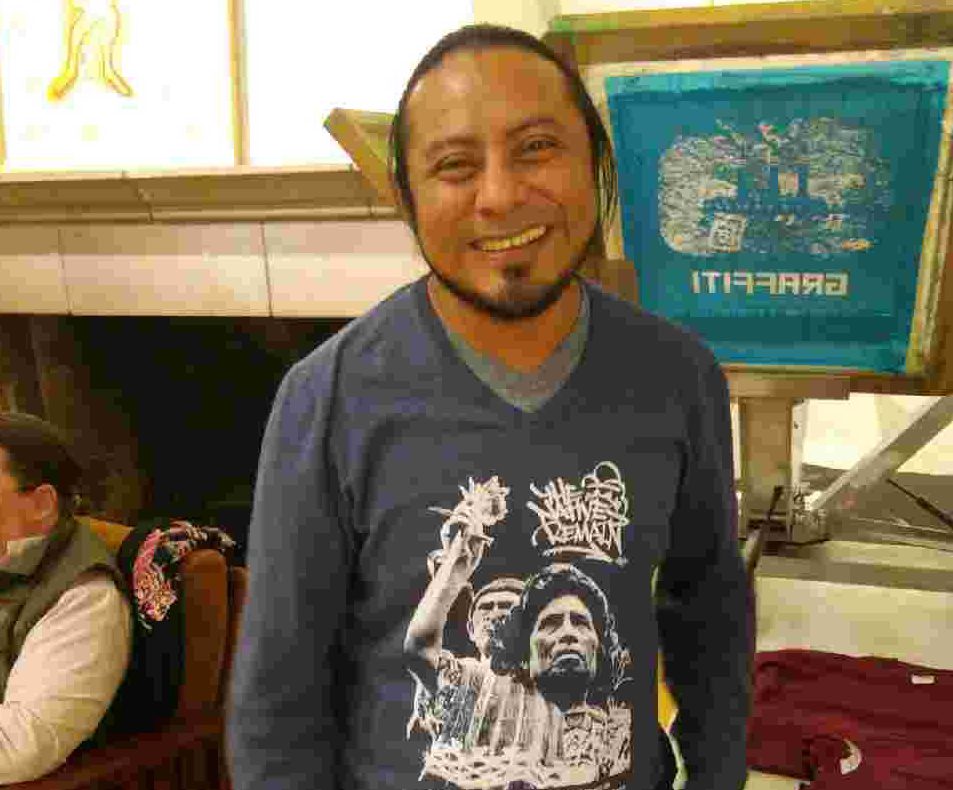 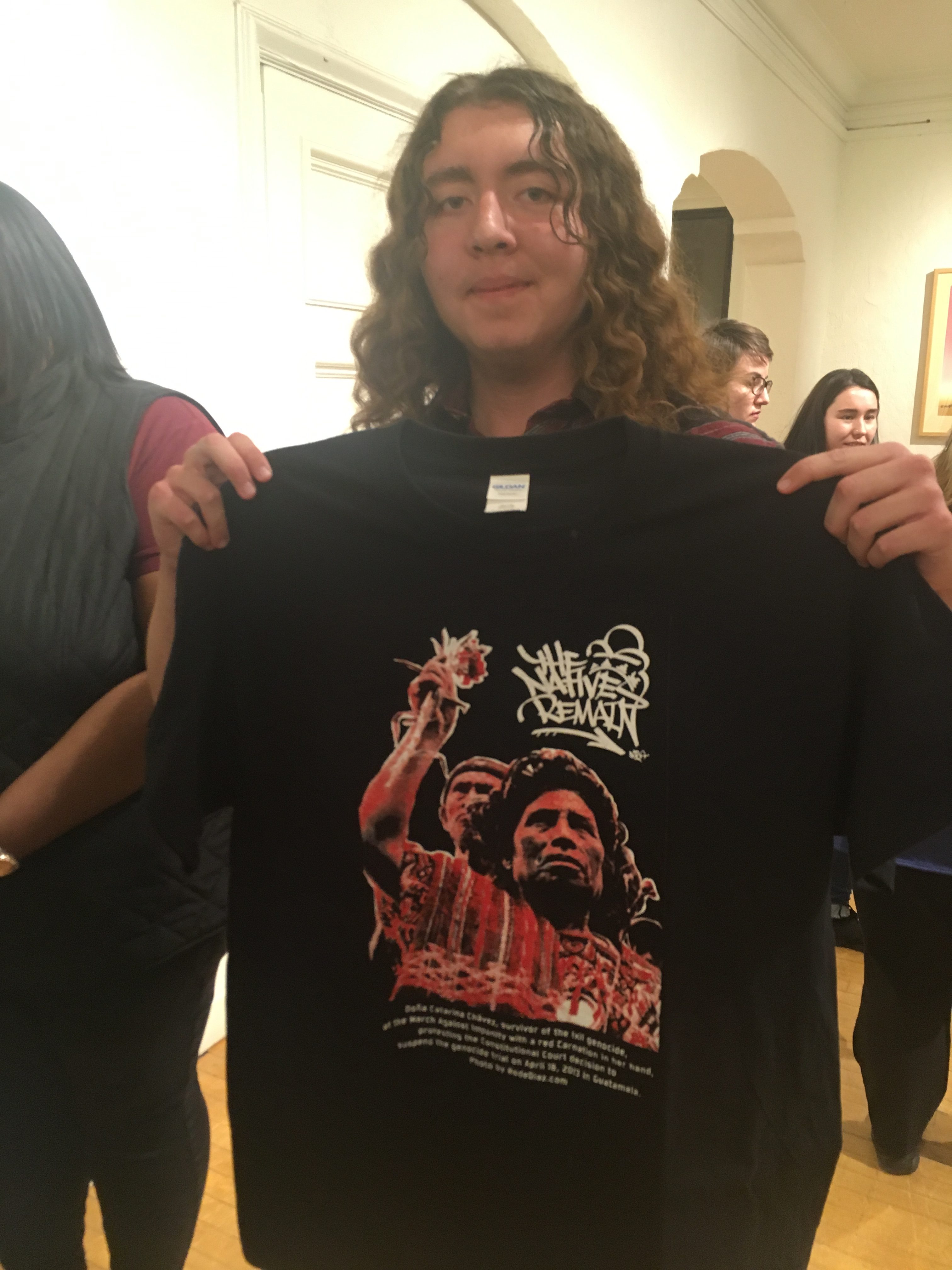 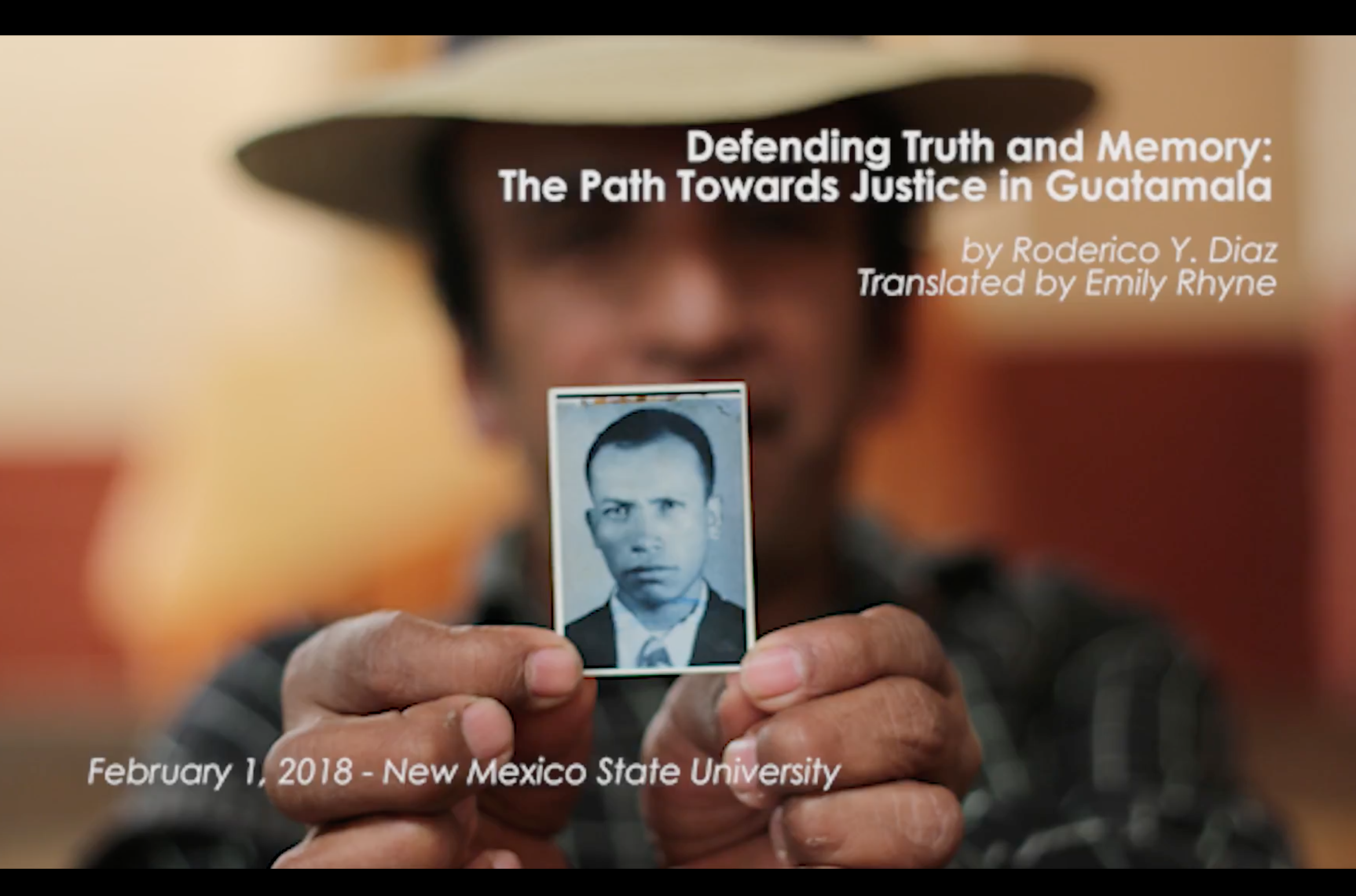 Support Indigenous artists and get a t-shirt!

In support of the launch of the exhibit and the work of photographer Roderico Y. Díaz, Saba – an artist and descendent of both Dine’ & Walatowa people – turned one of Rode’s photos into a screen-printed t-shirt. From Saba’s website: “Saba Wear is a line of hand printed apparel representing an Indigenous perspective and reconnecting the FutureOldSchool flavors while consciously capturing what is happening during this time we live in. Bringing a Proud, Strong, Simple message that we are still here!” Get your’s today! Contact Saba at: sabawear@gmail.com and 505-261-6103.

“Building forts out of sage brush, hauling water and attending boarding school in the mid 80’s. SABA a descendant of both Dine’ & Walatowa people from the 4 corners of the world found in Northern New Mexico. Like alot of Indian/Native/Indigenous people living on and off of the reservation, SABA has endured a great amount of confusion to why his traditional way of life and identity is getting harder and harder to find. Unknowing of the historical trauma that lay underneath piles of priceless hand woven rugs. SABA receives the message of his and herstories thru Arrowsoul fumes in current day petroglyphs. While working in various communities and building with tribal kin, Saba finds he is one of many indigenous refugees diggin his way back to the roots through Hip Hop/Indigenous Expression. Bridging the gap from old to new, Hoping to relay the message to the younger generations that the first peoples are ALIVE and Continuing to rise out of this colonial coloring book. Remembering that we have always painted walls, banged beats, rocked the earth and shared stories with our families that stretch from Canada to South America.

S/O to Creator and all the ancestors, Grand Mothers/Fathers, Moms/Dads and youths that have endured the struggle of this beautiful life/path.” 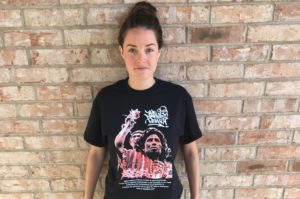 Articles, videos, and a podcast from the launch of the exhibit in New Mexico, where photographer Roderico Y. Díaz reflects on his work documenting struggles for justice in Guatemala. Read more. 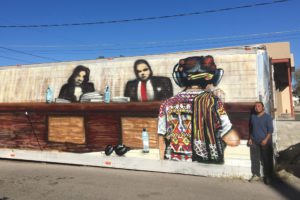 Photographs from the launch of the exhibit at the New Mexico State University Museum, screen-printing t-shirts, painting murals, and more!  Read more.

Want to get involved?

Host the exhibit in your city!

Las Cruces reflects on Truth and Memory Exhibit
Prompt: How does honoring memory empower the construction of a peaceful and just society? Honoring memory helps us heal and expands our hearts. The hard lessons of the past can help us have a better future for us all.

We will never achieve a peaceful and just society so long as governments lie about the past and the genocide in Guatemala. It is important to know how people were massacred but also how many resist and continue to resist.

Remembering and learning from the past will help create a more unified prosperous future.

Being compassionate to the past injustices is a building block we can use for our children and future.

We are nothing without our memory, through memory we resist and create peace.

It reminds people that you are still here, and your stories will continue to teach your future generations.

Our cultural memory is the source of strength that makes us as Indigenous people the most resilient on Earth.

We must record these things that were forced upon us.

Remembering the past will help us create a better future.  Do not let history repeat itself.

We may stand as one, but with the strength of 10,000 ancestors behind us.

Honoring memory allows us to share stories to be shared with others that often teach us lessons of the past so they are not repeated in the future.