Declaration from the V Gathering of the Latin American Network against Dams and for Rivers, Communities and Water (REDLAR)

Last week, NISGUA had the honor of participating in the fifth gathering of the Latin American Network against Dams and for Rivers, Communities and Water. Before arriving at the meeting site in Retalteco, Petén, NISGUA staff accompanied an 18 person international delegation visit to communities in the Ixcán region resisting the imposition of the Xalalá hydroelectric dam. If built, the dam would be the second largest in Guatemala and would directly impact approximately 14,000 people in 58 communities.

Despite widespread community opposition, the current government has made clear its intention to push the Xalalá project forward. Read more about community mobilization and ongoing peaceful resistance to the government’s announcement to re-open bidding on the dam project here. 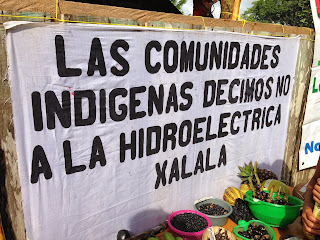 Declaration from the V Gathering of the Latin American Network against Dams and for Rivers, Communities and Water (REDLAR)

From October 7 to 12, 2013, 537 delegates from dam affected communities from 14 Latin American countries joined together in the community of Retalteco in the municipality of Las Cruces, Petén, Guatemala for the V REDLAR gathering.

First, the international delegates visited communities threatened by the construction of dams in Huehuetenango, Ixcán, Purulhá and Petén.

During the gathering, delegates shared information, analyzed policies and interests behind the construction of dams and discussed strategies for joint actions. The reality of each country demonstrates the existence of an extremely aggressive policy that promotes the exploitation of natural resources and deepens the extractive model. This development model, which time and again requires more energy and minerals in order to satisfy market needs, puts the interests of the economic and political elite at odds with the well-being of the majority of the population.

Due to it’s ambition, this system encourages predatory consumption, which puts the lives of all human beings at risk and threatens the subsistence of the most poor and vulnerable communities, particularly affecting women and children. The companies and governments do not hesitate to use deceit and violence in order to appropriate our common goods. We are currently living through a new era in which original people are suffering the dispossession of their lands.   The common denominators between our Latin American countries are: alliances between governments and corporations resulting in a lack of information and consultation with communities; the dispossession and displacement of original and traditional peoples; noncompliance in the payment of reparations for damage caused by the construction of dams; relevant national legislation at the service of the interests of big companies; partiality of judicial systems; militarization of communities and regions that defend their territory; and the legal prosecution, kidnapping, torturing, and assassinations of human rights defenders.

Once again, we confirm that the grave social and environmental damages generated by dams negatively affect the land, food, homes, health, and other human rights of millions of peoples and nature. This alliance promotes mining and oil projects that appropriate, extract, contaminate and privatize water. The promise of development is no more than an illusion used to deceive communities.

Dams are part of a discourse that proposes false solutions. They are not clean energy, they are destructive and contaminate, they cause irreversible environmental and social impacts, alter the course of rivers, provoke massive displacements, land grabs, destruction of biodiversity and division of communities.

The increase in social conflicts is provoked by the imposition of government plans on communities without considering their free, prior and informed consent. REDLAR promotes the peoples’ rights, defense of nature and social justice.

After six days of sharing our knowledge and experiences:

We will remain firm in our resistance and struggle in defense of sacred life, Mother Earth, rivers and water.
We will strengthen our networks and local, national and regional movements against dams and in defense of territory.
We will promote strategic alliances with other land and urban movements that fight for societies based on justice and dignity.

WATER, LAND AND ENERGY ARE NOT COMMODITIES
RIVERS FOR LIFE, NOT FOR DEATH
FREE RIVERS, FREE PEOPLE
WATER IS NOT FOR SALE, IT IS LOVED AND DEFENDED