On July 30, 2016, seven ancestral and community authorities from northern Huehuetenango began their journey back home after being held as political prisoners. All of the men were held for over a year – one for over three – on charges related to community protests opposing hydroelectric dams imposed without community consent.

Read more about the trial and charges.

But on July 22, the men stood before the High-Risk Crimes Court “B”, presided by Yasmín Barrios, who read the verdict absolving them of almost all the charges and ordering their immediate release. The verdict emphasized the role community authorities play as mediators, and as Barrios read out, “Attempting to mediate a community conflict is not a crime.”

Legal processes are not over, however. In a divided decision by the 3-judge panel, ancestral authority Rigoberto Juarez was convicted of coercion and Ermitaño López was convicted of obstruction of justice. Yet because of time already spent in pre-trial detention, both were released. While appeals processes will likely be launched for the conviction of Rigoberto Juarez and Ermitaño López, this victory sets an important precedent in cases of criminalization of community leaders who are defending land and life.

The Caravan to return home

Beginning on July 30, the newly-free men began their journey back home to Huehuetenango, together with groups from Guatemalan civil society, human rights bodies, and international accompaniment organizations. Making stops along the way to express solidarity with communities facing similar struggles defending their lands against extractive companies, the messages on the caravan were clear: 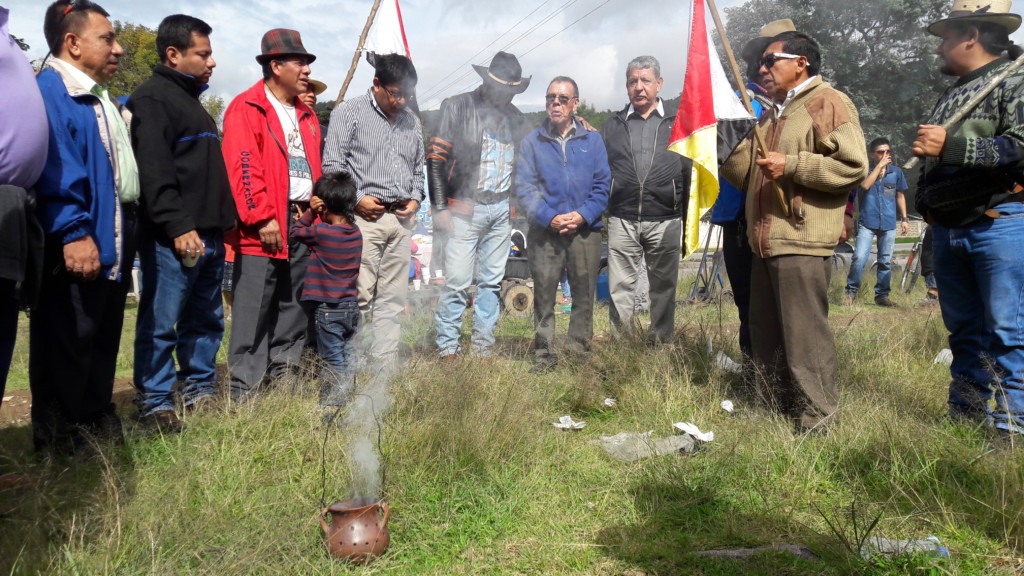 The caravan’s first stop was in Cipresales, Tecpan, where community leaders carried out an invocation in Q’anjob’al and Kaqchikel.

Lawyer Benito Morales said that this historic case established the right of ancestral authorities to continue their work. The collaborative legal strategy, in which numerous human rights legal firms participated pro bono, was to never deny the presence of the men at the scene of the protests – for which the men were charged. Instead, they focused on their legitimate right to be there in resistance as community leaders and authorities.

Rigoberto Juárez said, “All of Guatemala is being bled dry by outside economic interests in our territories.” He continued by saying that the State is complicit in the exploitation of their territories by transnational resource extraction companies, who are coming and violating the harmony that exists in their communities. “It is the spiritual responsibility of leaders to restore this harmony between Peoples.” 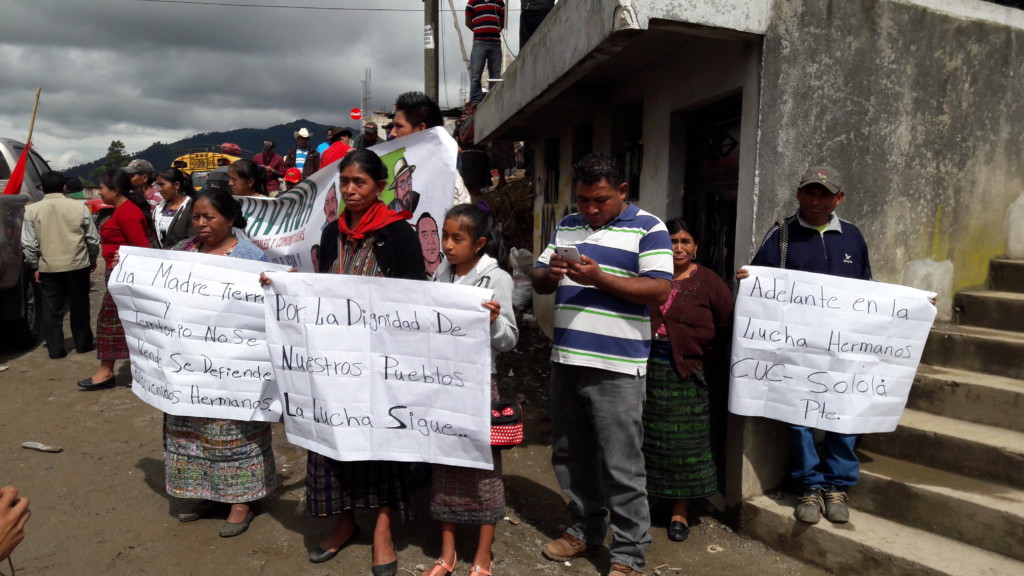 As part of the welcome to Los Encuentros, supporters hold up signs that read: “Mother Earth and our territory is not for sale, it is to be defended! Welcome, brothers.” “For the dignity of our Peoples, the struggle continues.” “Go forward in the struggle, brothers. CUC-Sololá.”

Ancestral authorities from Sololá spoke to the long history of mobilizations in defense of territories against natural resource extraction, pointing to one of the first big protests related to mining – caravan from Huehuetenango to Guatemala City in the late 1970s to denounce the abuses and threats of the San Alfonso mine. 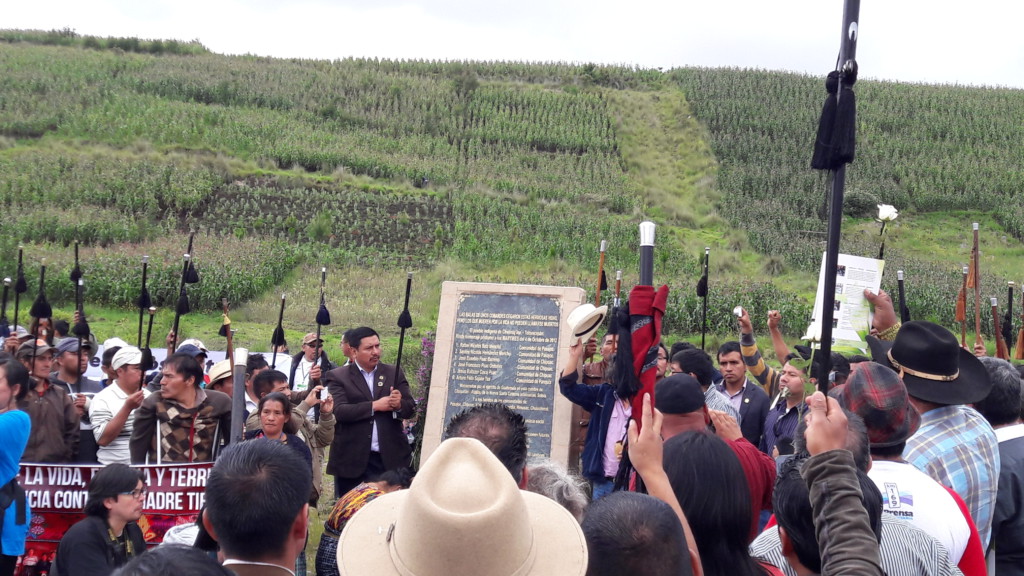 Ancestral authorities from Totonicapan, 48 cantones, lift their bastions in the air in support of the freedom of the leaders from Huehuetenango.

The Caravan stopped in the Cumbre de Alaska, site of the 2012 massacre of six community members by police and military at a demonstration protesting the rise in electricity fees.

A representative from the neighboring department of San Marcos spoke about the 11 political prisoners from San Marcos who have been criminalized for their opposition to a hydroelectric dam.

Rigoberto Juárez said, “Those who died here lost their lives in the defense of life for all Maya peoples. We are healthy people, peace workers with wisdom and spirituality. We won’t let them tear open the skin of Mother Earth to bleed her dry. Those here lost their lives defending the lives of all of the western Maya peoples. Our ancestors taught us that life matters more than anything. We have to defend it, even if it means giving up our own to do so.” 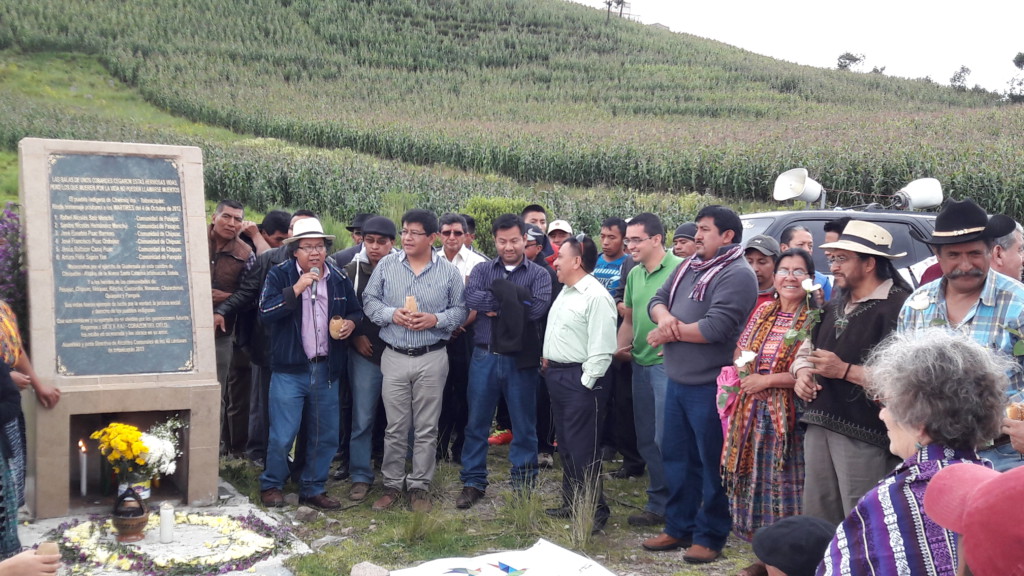 Stopping in Xela, Adalberto Villatoro said, “We went through some difficult times but your presence here is making it worthwhile. This moment shows that the struggle continues. Every day, they tried to stomp on our dignity but it wasn’t possible. We stand strong, uniting forces.” 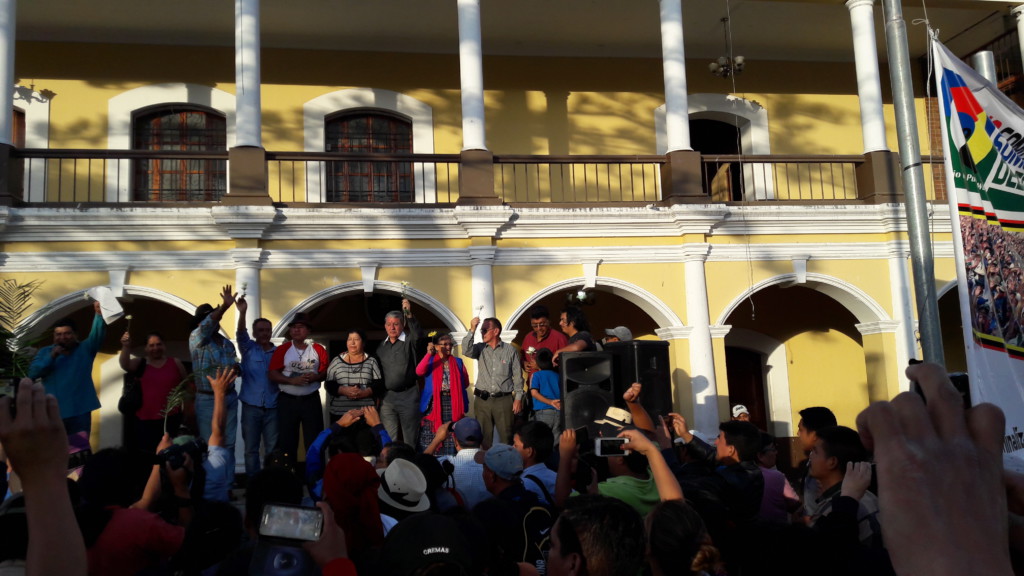 Representatives from 22 different municipalities show their solidarity by receiving the liberated ancestral and community authorities in the capital city of Huehuetenango. 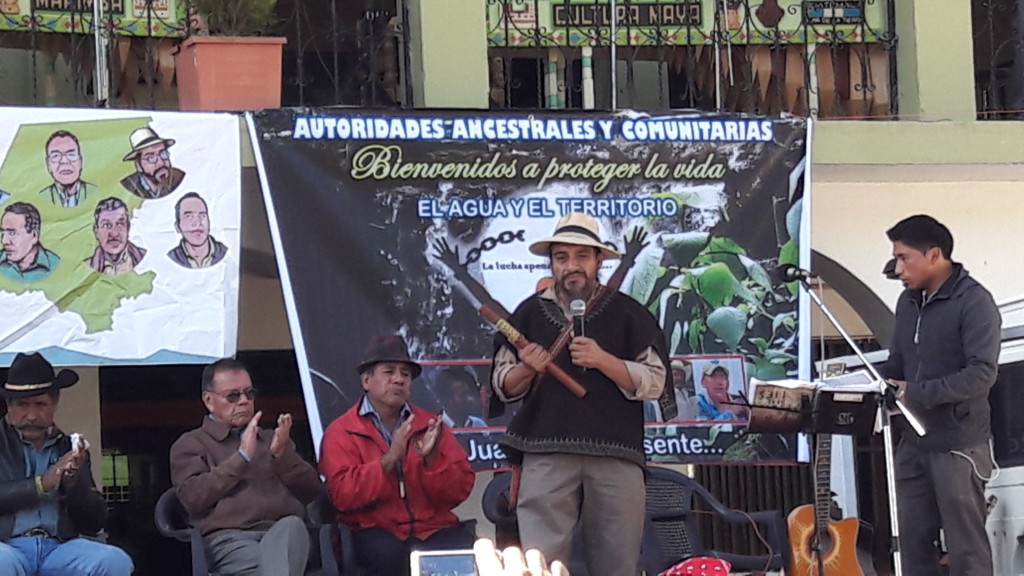 Juan Castro, a lawyer with the Association of Maya Lawyers, explains that, “As Maya peoples, we know that we did not write the laws and the legal system was not created for us. But as Maya lawyers, we have learned to understand the law and learned to use it for the release of

[those who have been criminalized]. Judge Yasmín Barios said that she believed in your innocence and urged you to carry on your work as defenders of life. Authorities do not make decisions alone; they carry the whole community with them and those people are here today.” 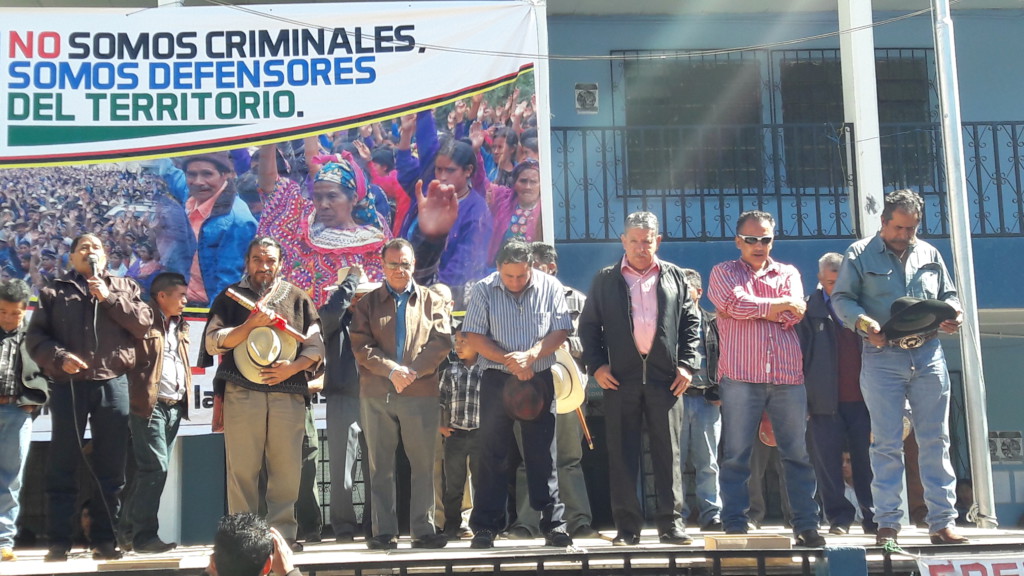 The Caravan makes their second stop in Maya Q’anjob’al territory, in the community of Saloma. 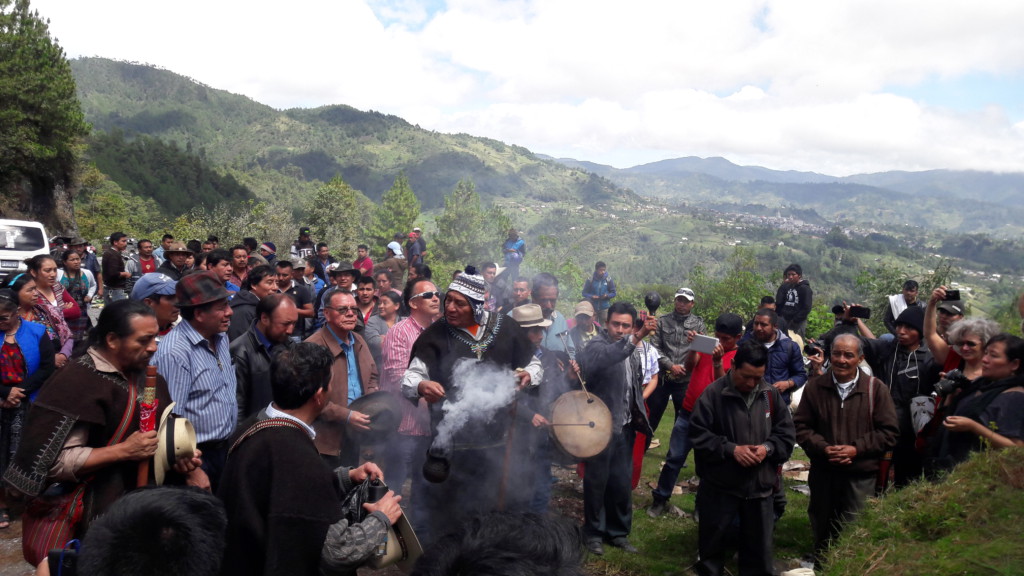 A spiritual guide prepares a ceremony at a stop between Saloma and Santa Eulalia, for the recently-freed ancestral authorities. 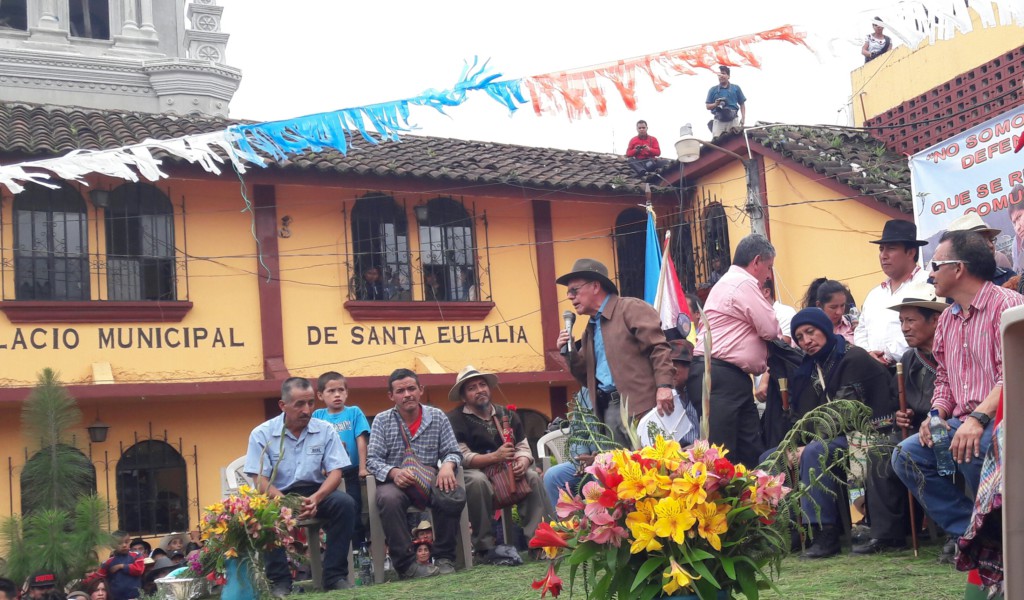 Former political prisoners from Santa Cruz Barillas, Saul Méndez and Rogelio Velásquez, join in the festivities in Santa Eulalia, hometown to Rigoberto Juárez and Domingo Baltazar. Francisco Juan takes a moment to recognize that nine defenders of life and territory have been freed after being unjustly imprisoned, referring to the 2015 release of Saúl and Rogelio who were wrongly convicted of kidnapping and spent three years in prison. 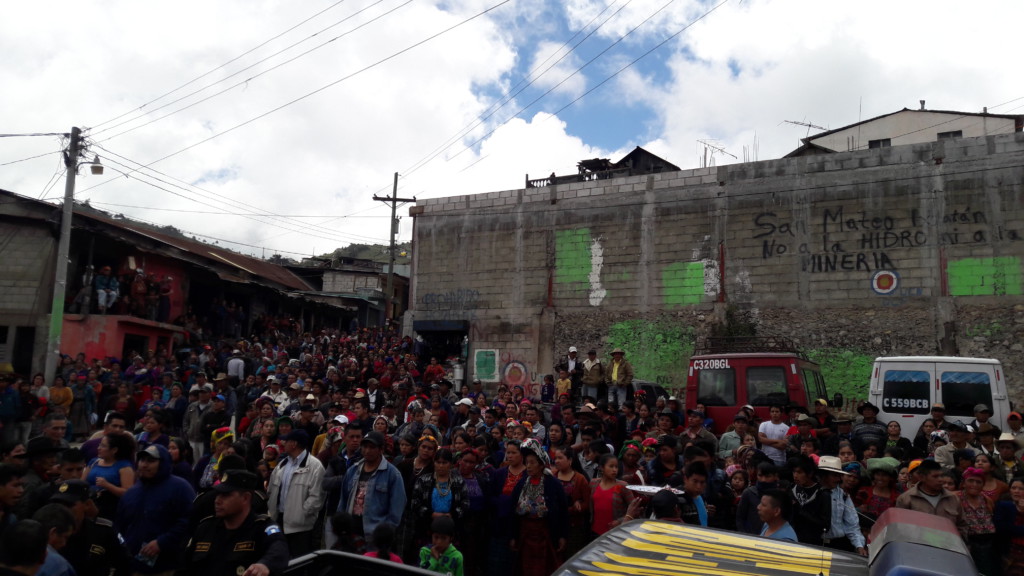 The Caravan makes a stop in the Maya Chuj community of San Mateo Ixtatán whose authorities have similarly experienced processes of criminalization for defending their territory against the imposition of the hydroelectric dam in the northern community of Ixquisis. 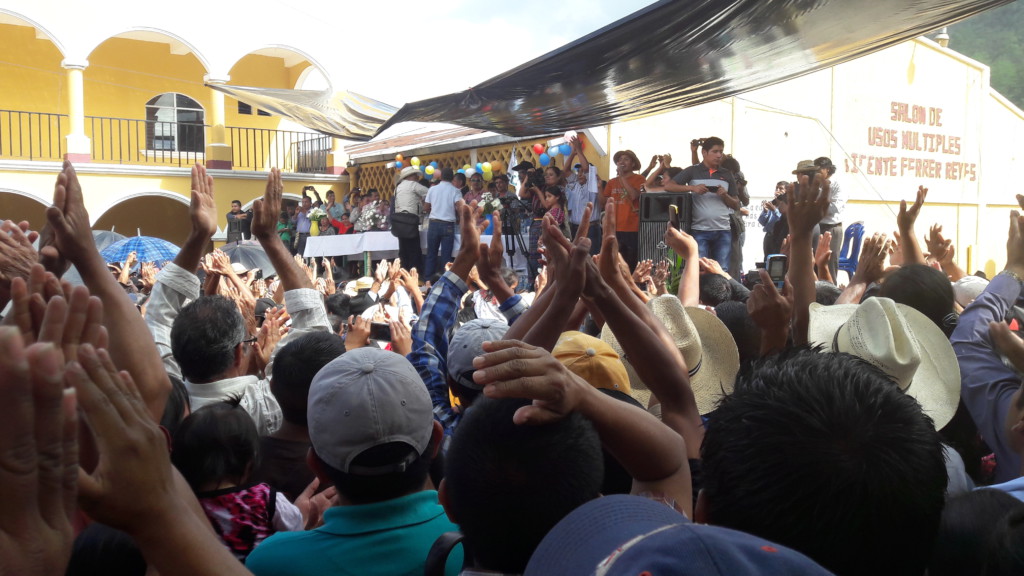 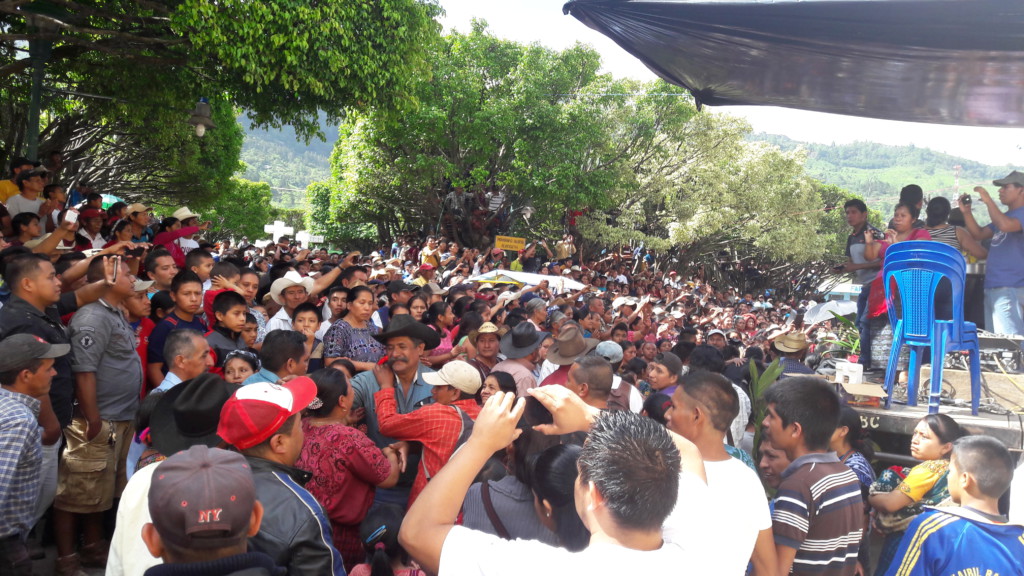