CALDH denounces break in at the home of Lawyer Esteban Celada, lawyer of high impact cases

NISGUA joins CALDH in denouncing the break-in of the home of Esteban Celada. Esteban is a well known Guatemalan lawyer who currently represents the girls massacred in a state-run youth shelter “Hogar Virgen de Asunción” in 2017. To date, there have been 39 attacks on Esteban, who also worked on the Molina Theissen case, Sepur Zarco case and provide support in the CREOMPAZ case.

We are deeply concerned about this pattern of attacks on human rights defenders. We call in the Guatemalan state to immediately investigate this break-in and guarantee the safety of Esteban, his family, and his colleagues.

BREAK IN AT THE HOME OF LAWYER ESTEBAN CELADA, LAWYER OF HIGH IMPACT CASES

Upon returning to his home in zone 18 in Guatemala City on April 22nd, lawyer Esteban Celada identified his home had been broken into by unknown persons who forced open the main doors and inside the property the walls and floor were smeared with fecal matter.

This is not the first time that the lawyer Celada has suffered attacks and harassment. This act adds to the 39 acts of threats and aggression that the lawyer has experienced, which are already known to the Public Ministry and the Office of the Ombudsman for Human Rights. International bodies have denounced these systemic attacks to the Ombudsman. The frequency of the aggressions shows a systematic pattern against him.

In his professional career,  Esteban Celada has been a lawyer for cases of high impact both off the past and off the present, with organizations such as Women Transforming the World (MTM) and the Center for Legal Action in Human Rights (CALDH). Amongst the emblematic cases of crimes during the Internal Armed Conflict such as sexual violence, forced disappearance and crimes against humanity, Esteban Celada got convictions on the Sepur Zarco case and the Molina Theissen case. Likewise, he assisted in the process of demanding justice for the victims of Military Zone number 21, known as CREOMPAZ. In the cases of human rights violations in the present, he litigates the case of the Safe Home of the Virgin of Assumption in which 41 young girls under the state protection were burned in 2018.

This attack constitutes a grave violation of his rights, putting his physical and emotional safety at risk. The state, by way of its institutions like the Public Ministry and the Ministry of Government are complicit by to date not having a credible hypothesis that reveals at least a pattern, despite the number of attacks. Likewise, since there are no security measures on a national level, it must be turned to the Interamerican System of Human Rights to have measure of protection. The inaction of the state in the face of these types of aggressions, which provoke perpetrators to continue under the cloak of impunity, is shameful and alarming. 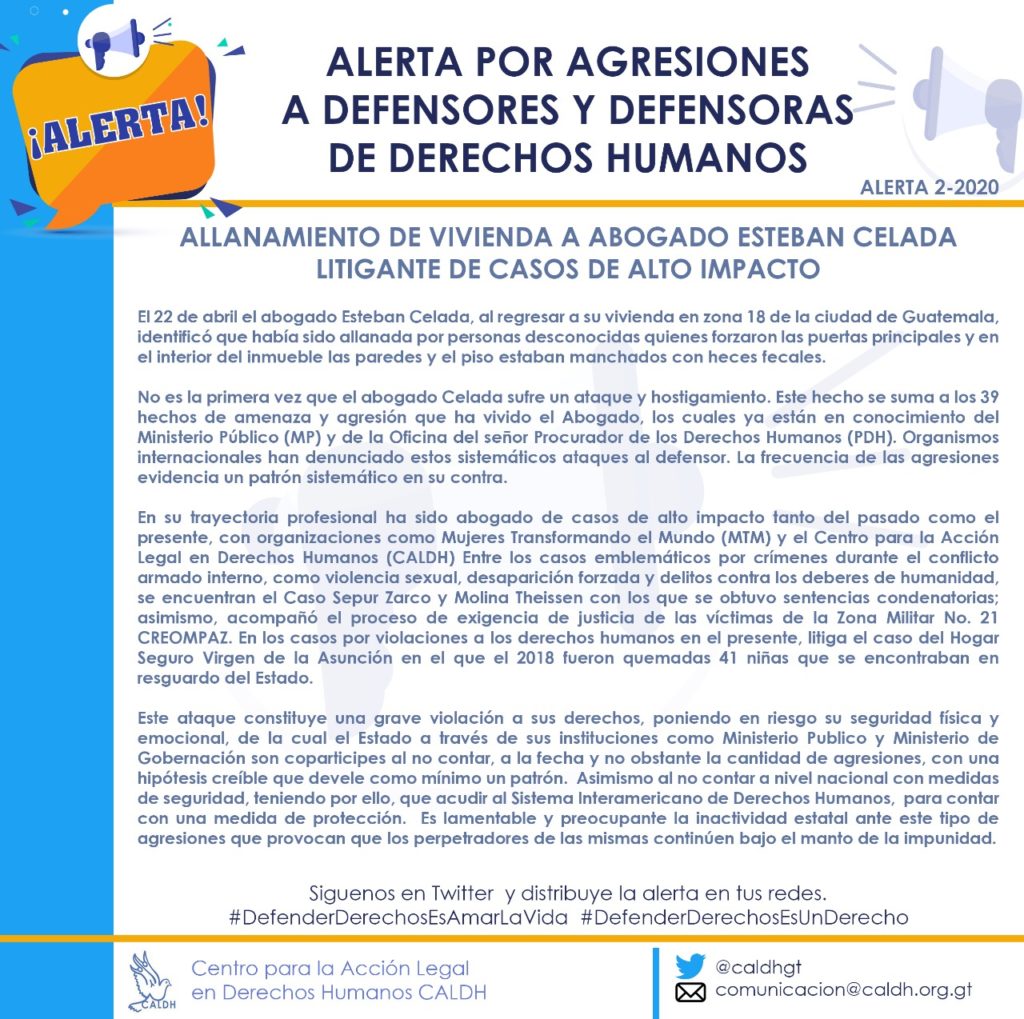 NISGUA stands with Guatemalan partner organizations, including CALDH, as they continue decades of work seeking justice for crimes of the past. Please donate today to support NISGUA’s ongoing advocacy and accompaniment work in favor of the fight for justice.