The Center for Environmental and Social Legal Action of Guatemala (CALAS) denounces the murder of Jeremy Abraham Barrios Lima, assistant to the General Director Yuri Melini. Below is the translated urgent action and original statement in Spanish.

On November 12, 2016, in Guatemala City at approximately 5:30 PM, JEREMY ABRAHAM BARRIOS LIMA was shot and killed. He was 22 years old, single, graduated from high school with a focus on computer science, and was an activist and human rights defender. He worked for the last two years with CALAS as the Assistant to the General Director, tasked with institutional operations and handling sensitive information. He is survived by his mother and two younger sisters.

Through prior information gathered by CALAS and information given by family members, neighbors, firemen, and members of UDEFEGUA, we report that JEREMY ABRAHAM BARRIOS LIMA

The National Civil Police, the Public Prosecutor’s Office, and the National Institute of Forensic Science (INACIF) carried out the initial proceedings. The online newspapers Soy 502 and Nuestro Diario published articles about the murder.

In actively condemning this crime, CALAS makes the following national and international URGENT ACTION AND PUBLIC DENOUNCEMENT, making the Human Rights Ombudsman (PDH) and the Unit for the Protection of Human Rights Defenders in Guatemala (UDEFEGUA) aware of the crime, as well as Front Line Defenders, Protection International, Amnesty International, the Inter-American Commission of Human Rights, the European Union embassy in Guatemala and the United Nations High Commissioner for Human Rights through its Guatemalan offices. As CALAS, we reiterate that we are committed to ensuring that this case does not remain in impunity.

We stand in solidarity with his mother, sisters, and other family members, as well as the Guatemalan human rights community. We expect action from the justice system so that this case does not remain in impunity. 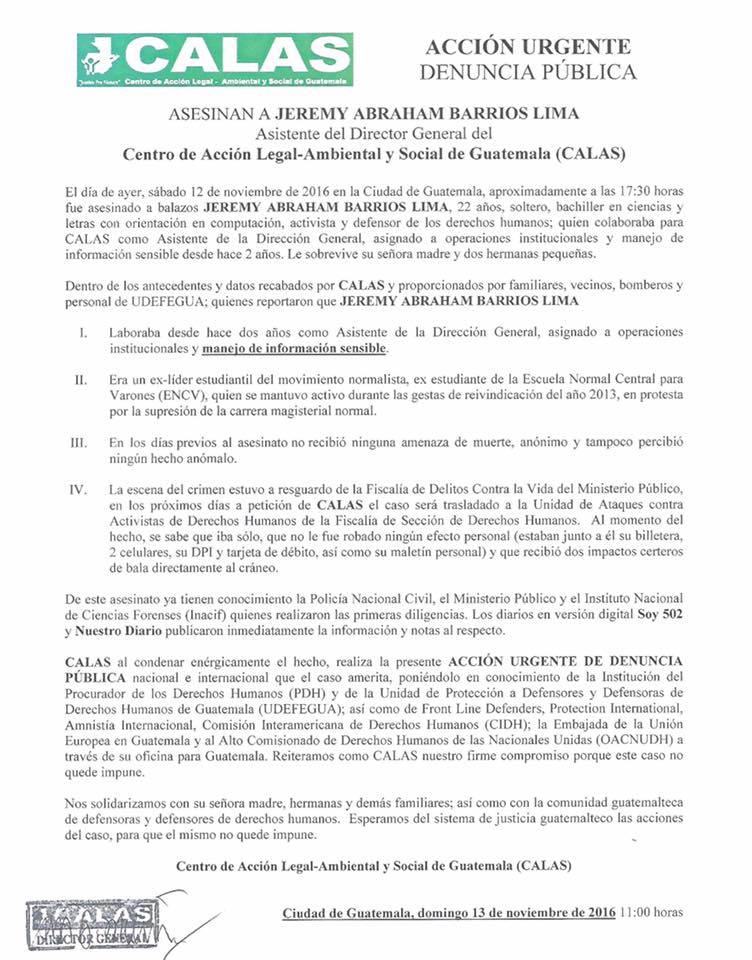