As I reflect on the past year since joining Network in Solidarity with the People of Guatemala (NISGUA) and officially finishing my first period in Guatemala Accompaniment Program, I hold my deepest gratitude to you all who have supported my journey in this accompaniment work. I am eager to share this experience with you all and find ways in which we can continue to build solidarity into 2019.

It has been difficult to witness the atrocities happening along the US- Mexican border, committed against people from Central America. It’s particularly difficult to know that many Central American migrants have been forced from their homes due to the legacy of state and corporate violence and impunity. I travel these beautiful lands with the families I accompany, who are the caretakers of the forest and rivers. I hear testimonies of both their beautiful struggle and the violence they face for fighting for their ancestral lands, against impunity and for human rights. Often, they face criminalization and other forms of repression. Sometimes, they are killed for their activism. In Guatemala alone, nearly 30 deaths are now recorded for 2018. Sometimes, migration is their last form of resistance. However, migration has consequences on activists and their resistances.

Rodimiro Lantan, general coordinator of COMUNDICH, who works with 48 communities in the Maya Ch’orti’ region, shared with me that his community is seeing an increase in migration, which he credits to the violence that comes from impunity and isolation, when the state does not intervene in cases where violence is committed against activists. Activists become more vulnerable when they are forced to migrate because they suffer the loss of community and vice versa their communities suffer the loss of members, which is necessary for the collective struggle for defending territory and human rights. Let’s keep in mind that mass displacement of a people serves transnational corporations seeking to bring their projects to Guatemala. There are regions that are key for resource extraction. In the past, the government and business interests collaborated to remove populations through genocide. Today, many are forced to migrate because of the threats they face.

Another current-day strategy for removing people is through criminalization. I accompanied two indigenous authorities from the Corozal Arriba community who were given a maximum sentence for homicide. The Corozal Arriba community faces threats for their activism that is focused on recuperation of indigenous identity. They affirm that criminalization is due to their struggle in reclaiming their ancestral lands. In fact, at the time the murder took place, indigenous authorities were in the municipality getting their land titles and they believe it was this very act that made them a target for criminalization. After presenting an appeal, Jose Mendez Torrez, indigenous mayor, affirmed the need to fight back, saying “this charge is against my person, but it is also criminalizing my community.” Criminalizing people who fight for their rights is an attempt to scare entire communities into silence.

There are two cases related to this event which took place in 2013. In the first case there were 17 orders of capture for the death of an armed guard. Of the 17, 6 people were captured and imprisoned for 20 months, most of it spent remanded in custody. Their process moved quickly and without evidence they were convicted. There is a second case for the killing of three campesinos by armed guards, where the three widows are the plaintiffs. This case has been delayed through a series of cancelations of hearings. It is important for us to take into consideration gender dynamics and how women are affected. We understand that economic burden shifts onto the women of both the deceased and the imprisoned. Often, the widows leave their families and duties to travel over an hour to the courthouse only to find out that the hearing has been canceled. Two of the three widows are elders and at times it is difficult when their health is compromised. With that said, they remain committed to bring justice to the wrongful killing of their husbands.

On January 14, 2019, 18 days after the appeal was filed, liberation was granted for the 6 political prisoners. On February 6, 2019, we accompanied COMUNDICH in welcoming back indigenous authorities to Corozal Arriba. It was a joyous occasion for their families and community. It was a time to recognize our partners who worked day and night on the legal process and to recognize the community that came together to support each other and the families in the absence of their loved ones. There was recognition of the solidarity that was needed at the local, national, and international level. It was a moment to name the strategy used to repress the community but also to see how in the struggle the people can win. The three widows were present to celebrate this moment and to remind us that the fight for justice still remains. 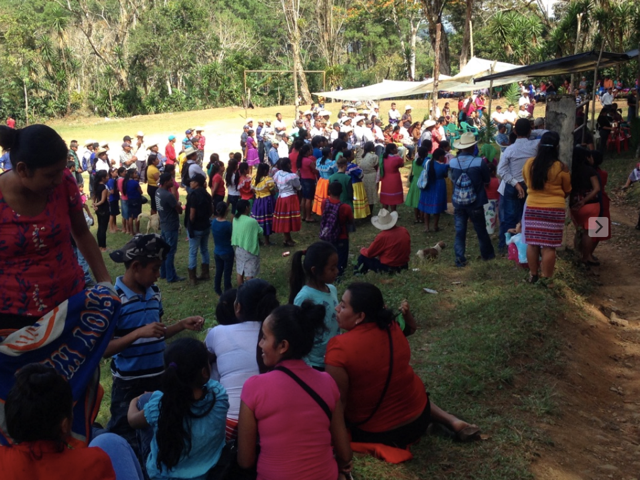 The Maya Ch’orti’ community gathered to celebrate the liberation of the political prisoners and welcome them back to Corozal Arriba on February 06, 2019. Photo credit: Rosemary Giron

As someone who is still fairly new, I recognize the work and dedication the accompaniers before me took on when accompanying COMUNDICH and this particular case. From visits to the prison which helped fight isolation that political prisoner suffered to providing international observation at court hearings, accompaniers were part of a long process to see this liberation come true. I recognize that my physical presence today is only possible with a whole team of people that support NISGUA’s Guatemala Accompaniment Program. I am blessed to witness the fruit of the labor it takes to build international solidarity and remain committed to this work with our partners in Guatemala and with you all back home.