2012: Defense of Territory and Natural Resources

2012 was marked by a high level of conflict in Guatemala, especially related to the exploitation of natural resources. Here we summarize some of the cases in which ACOGUATE accompanies human rights organizations in defense of their territory. NISGUA is one of the eleven international organizations that form ACOGUATE’s accompaniment project. See the original version of this article in Spanish on ACOGUATE’s blog here. 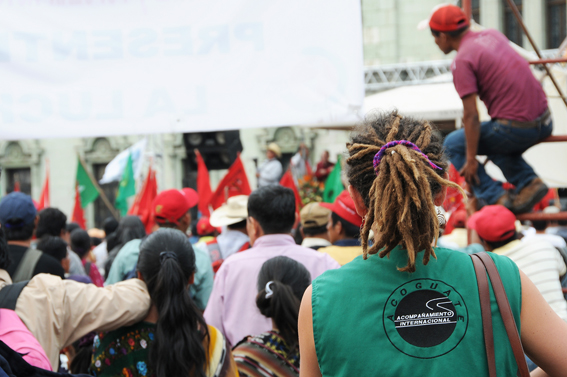 The UN High Commissioner on Human Rights, Navi Pillay, visited Guatemala from March 11th to the 15th of 2012. During her visit she expressed concern for the high level of insecurity and violence in the country, but she sees hope in the court sentences for the Dos Erres massacre and the ongoing investigations in the Ixil region

On March 13th, the High Commissioner met with more than 3,000 representatives and indigenous and ancestral Maya, Xinca, and Garifuna community leaders in Totonicapán. The demands of the assembly were based on four themes: i) autonomy and self-determination, ii) megaprojects, iii) criminalization and remilitarization, and iv) discrimination and racism toward the indigenous population in Guatemalan society. In an interview after the meetings, Pillay said that the indigenous groups “shared her discomfort of being constantly stigmatizes as criminals and terrorists: this happens when they present legitimate grievances in consultations around the exploitation of their resources”. Pillay concluded, “There are serious problems. I consider valid their claims that they are treated as if they’re invisible. The Constitution of this country speaks of equality for all”[ii].

ACOGUATE observed the meeting in Totonicapán, invited by accompanied organizations who were present (the Association for the Integral Development of San Miguel Ixtahuacán and the Departmental Assembly of Huehuetenango). Read NISGUA’s account of the High Commissioner’s visit here.

Two weeks after the visit by the High Commissioner, on March 27th, more than 5,000 campesinos arrived in Guatemala City after marching 217 kilometers from Cobán, Alta Verapaz over the course of 9 days. The campesinos made suggestions before the President of the Republic, Congress, the Judicial Body, and the Public Prosecutor’s Office. Their demands span four topics: i) the agrarian issue, ii) the violation of indigenous and campesino communities’ individual and collective rights, iii) mining, hydroelectric dams, monocropping, and megaprojects, and iv) the approval of laws in favor of rural farmworker communities. The executive’s response recognized the structural and historic nature of the suggested demands, giving a direct response to some. ACOGUATE observed the arrival of the march in the capital and activities in front of the National Palace at the request of the coordinators of the march.

Megaprojects and the exploitation of natural resources

On May 18th a sentence was given in the case known as “the eight women”[iii] in San Miguel Ixtahuacan, in the Department of San Marcos, home of the Marlin Mine, operated by Montana Exploradora, a subsidiary of the Canadian company Goldcorp Inc. It was resolved to annul the arrest warrants, remove the electric pole from the land of Gregoria Crisanta Pérez Bámaca, and cancel the supposed lease[iv]. At the request of the Movement of Indigenous Women, Tz’ununija[v], ACOGUATE observed the public act of removing the pole from Pérez Bámaca’s land on May 31st. See the Tz’ununija’ Indigenous Women’s Movement’s communique from May.

Opening bidding for the construction of the Xalalá hydroelectric dam in the Ixcán was announced by the government as a priority for 2013. The Association of Communities for Development and in Defense of Territory and National Resources (ACODET) argues that the dam would threaten their way of life and the subsistence of the communities. Given this threat, the organization met with national and international actors in October with the goal of asking them to take into account the negative impacts on the affected communities and demand that their community consultations, which have demonstrated a majority opinion against megaprojects in the region, be respected. ACOGUATE accompanies ACODET and observed these meetings. Read more in NISGUA’s article Communities Denounce Xalalá Dam and Oil Exploitation.

These aren’t the only conflicts between companies and communities regarding the issue of exploitation of natural resources. In the last number of months there is growing tension especially in the areas of San Jose del Golfo and San Rafael Las Flores.

On May 1st, three community leaders were attacked in Santa Cruz de Barillas, resulting in the death of one and two seriously injured. The survivors stated that their attackers were personnel of the hydroelectric company Hidro Santa Cruz and with this, the population, seeking justice, reacted in anger. To regain control of the situation, the government declared a state of siege.

Campesino and human rights organizations expressed their rejection of this measure, alterting to the abuse of authority during raids and the detention of individuals without being heard by a judge[vii]. The use of the state of siege as a way to resolve conflicts was criticized and the present, and past, government’s failure to respect the results of a community consultation conducted in 2007, which rejected the megaprojects in the region, was cited as a source of local people’s frustration. Despite the consultation, the government gave permission for the construction of the hydroelectric dam.

The state of siege was lifted on May 18th and since then 15 people have been detained for their supposed participation in the events[viii]. As of January 9, 2013, all of the detained have been released, following the release of three prisoners in September and November. ACOGUATE observed the audiences in Santa Eulalia at the request of the Departmental Assembly of Huehuetenango (ADH). On May 26th, two workers of the company have been charged with the death of the community leader on May 1st[ix]. ACOGUATE has also observed the hearings of this case. See this communique State of Siege in Santa Cruz Barillas Lifted and NISGUA’s coverage on the Political Prisoners Liberated in the Santa Cruz de Barillas Case.

Given the events on May 1st, ACOGUATE also accompanied, at the request of the feminist collective Actors for Change, the Festival for Life, the Body, and Territory of Women, which was held in September.

On June 30th, the official date of observance for the National Day of the Guatemalan Army, thousands of people marched from their communities in San Juan Sacatepéquez to the central park in Guatemala City in protest of the installation of a Military Brigade in their community[x]. The military base in San Juan Sacatepéquez is one of many that were installed during 2012[xi]. ACOGUATE observed the march.

In July, the Association in Defense of Human Rights in the Ixcán published a statement expressing their concerns following the entrance of the military in Cuarto Pueblo in April and July, which according to their statement brought memories of the internal armed conflict and the massacre in their community, in which almost 400 people were killed[xii]. Read NISGUA’s article Cuarto Pueblo Denounces Military Presence.

The event which has generated the most worry about the militarization in the country at a national and international level was the death of eight campesinos in Totonicapán on the 14th October. They were protesting the rising prices of electricity and education reform; the demonstration also left many people injured and poisoned by tear gas. (See NISGUA’s coverage of this incident Indigenous protesters killed in Totonicapan, Guatemala.) Investigations by the Public Prosecutor indicate that at least six of the campesinos died by gunfire from members of the army. Eight soldiers and a colonel have been charged with the killing. The deaths provoked reactions by human rights organizations against increasing militarization, and members of the diplomatic corps expressed concerns around the presence of the armed forces at protests. ACOGUATE observed the hearing of the first statement of the accused military personnel.

[iv] In 2005, high tension cables were installed among three communities of San Miguel Ixtahuacan, in the Department of San Marcos, close to the Marlin Mine, operated by Montana Exploradora, a subsidiary of the Canadian company Goldcorp Inc. Various people claimed that they did not ask permission to use their lands. One of them was Gregoria Crisanta Pérez Bámaca. Goldcorp Inc. for its part claimed it had a lease with her from 2004, something that Pérez Bámaca denies having signed. In June 2008, Pérez Bámaca caused a short circuit in electricity lines that passed over her house, causing a break in the power to the mine. Some 150 citizens in the neighbouring villages united to protest the activities of the Marlin Mine and to show support for Pérez Bámaca. Eight orders of capture were sent against her and seven other women of the community Source: Mimundo.org, November 30, 2008, Minería en San Miguel Ixtahuacán: Conflictividad y criminalización, www.mimundo-fotorreportajes.org/2008/11/minera-en-san-miguel-ixtahuacn.html