In response to the government’s announcement that it will restart the bidding process for the construction of the Xalalá hydroelectric dam in 2013, a delegation from the affected region traveled to the capital to present their concerns and speak out against the negative impacts that communities are already suffering downriver from existing hydroelectric dams. The delegation, made up of the Association of Communities for Development and the Defense of Territory and Natural Resources (ACODET), the “Ixcán Referendum Follow-Up Commission,” the Ixcán Front in Defense of Life and Territory (FIDET), and community representatives, met with state institutions, international organizations, and NGOs from October 23 to 26, 2012. They reasserted their right, protected by ILO 169, to free, prior, and informed consent, reminded the government that communities had already voted against the project in two community referendums, and called on international organizations to monitor the situation in case of possible human rights violations (read the delegation’s press releases from October here). Despite community demands to suspend the project, the government has persisted, calling meetings with local government and community leaders and officially announcing the opening of bidding to contract the studies necessary for the dam’s construction. 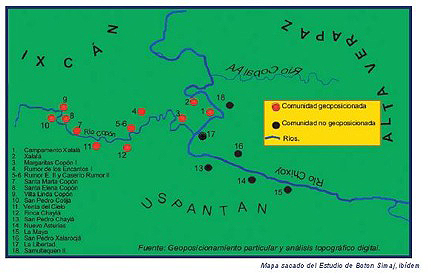 The dam, located at the confluence of the Copón and Chixoy Rivers, would flood lands in three municipalities in two departments: Ixcán and Uspantán, Quiché; and Cobán, Alta Verapaz. The plan was originally conceived in the 1970s as part of the Northern Transversal Strip (FTN), a political-economic vision for land use, industrialization, and natural resource exploitation in the northern part of the country elaborated by the military government of General Arana Osorio

[i]. Currently, the Xalalá Hydroelectric Dam is connected with the goals of Plan Mesoamérica (originally Plan Puebla-Panamá) and its energy integration initiative, the Central American Electrical Interconnection System (SIEPAC). According to the National Electrification Institute (INDE), the Xalalá Dam’s potential generation of 181 megavolts would make it the second largest dam in the country, after the infamous Chixoy dam (280 megavolts).

An independent study by the MadreSelva Ecologist Collective estimates that the dam would inundate some 15.6 square miles[ii]; according to another study by the Copenhagen Initiative for Mexico and Central America (CIFCA), this would flood the inhabited and/or cultivated lands of 58 communities[iii].

In recent years, the government has renewed its interest in the infrastructure and development goals outlined in the historical FTN Plan. As a signatory of the International Labor Organization’s (ILO) Convention 169, the government of Guatemala is obligated, among other things, to respect the right of indigenous groups to free, prior, and informed consent. On April 20, 2007 the communities of Ixcán exercised this right and held a referendum (consulta). Almost 90% of the more than 21,000 inhabitants voted to reject the construction of the hydroelectric dam and oil exploration in their municipality. Despite this clear rejection, the Guatemalan government opened bidding for the construction of the Xalalá dam in September of the same year. However, due in part to community opposition and in part to the economic crisis, bidding was closed a year later without any successful proposals.

In October 2010, three years after this first vote, communities in another municipality that would be affected by the dam, Uspantán, held a similar referendum. The results were similar. More than 90% of the inhabitants voted against allowing mining concessions and hydroelectric dams in Uspantán. Nonetheless, in late 2011 the government contracted the private company INTEG to study and “design a strategy to continue the process of planning and carrying out the studies, construction, and operation of a hydroelectric project in the area” . The government announced its plans in April 2012 to reopen bidding for construction of the Xalalá dam in June 2013. To minimize risks to the bidding companies, the government this time has assumed responsibility for the social impact study and dialogue with the affected population. Currently, through a formal agreement between INDE and the President’s Programming and Planning Secretariat (SEGEPLAN), eight personnel have been contracted to work on the social impact study, land zoning plan, and form the bargaining table.

Reasons for community opposition to the hydroelectric dam 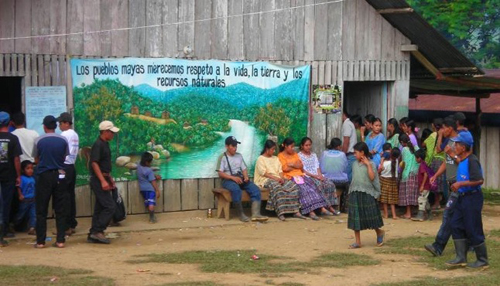 The departments that would be affected by the Xalalá Hydroelectric Dam are the two poorest in the country based on measures such as access to healthcare, education, decent housing, and work, according to Guatemala’s National Institute of Statistics (INE). Local inhabitants depend directly on the land and the quality of their natural resources, such as water in the streams and rivers, for their sustenance, hygiene, and wellbeing. Losing their land, communities argue, means losing their way of life. The situation is made even more complicated by insecure land tenancy that has its roots in inadequate titling laws and the displacements of the years of the internal armed conflict[iv].

In the public forum held on October 24, 2012 by the delegation that visited Guatemala City, community representatives explained the reasons for the rejection of the hydroelectric dam: 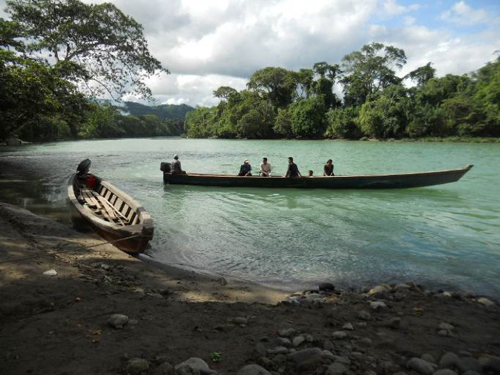 The communities around Xalalá argue that they have much to lose and little to gain from the construction of the hydroelectric dam. The delegation that traveled to Guatemala this October to meet with state institutions, international organizations, and non-governmental organizations reiterated their protests that over 30 years after the construction of the Chixoy dam in the 1980s, the more than 30 communities who lost their lands–and in the case of the community of Rio Negro, their lives– have still not received any reparations[v].

The delegation also stressed that communities downstream of existing dams suffer impacts as well. Representatives from Ixcán communities downstream of the Xacbal and Palo Viejo dams reported sudden fluctuations of the river level and the presence of chemicals from turbine maintenance, dangerous for both the residents that use the river and the local fauna[vi]. They are concerned about the recent authorization, on October 15, 2012, of a second hydroelectric dam, Xacbal Delta, which is planned upriver from the same communities affected by Xacbal dam. Despite these observed impacts, the Ministry of Environment and Natural Resources (MARN) does not require that environmental impact studies consider downstream effects.

Development based on communities’ needs

A common refrain from the government is that the communities are stubbornly against “development” of any kind and are simply unreasonable. During the public forum on October 24th, the community representatives responded to this accusation by stating their belief that the Xalalá dam would not bring development because it would flood their lands and their communities. True development, they stressed, means responding to the comprehensive needs of the community. “For us the land is sacred, and all that we have. Why should we have to pay with our land and our lives the cost of an unsustainable model of development that is bringing the planet closer to destruction?”[vii] A journalist for The Observer explained in detail how, in comparison to the community’s view of development, SIEPAC brings a liberal free market conception that focuses more on the exportation of energy on the Central American market than on local needs of the communities[viii]. The delegation echoed this view when they expressed their doubts that a public-private or fully private model would provide any reliable or affordable electricity for local use. Existing tensions and protests across the country against the high price of electricity support this concern[ix].

After the Community Referendum in Ixcán in 2007, 53 communities from the three municipalities that would be affected by the Xalalá dam formed the Association of Communities for Development and in Defense of Territory and Natural Resources (ACODET). The association’s objective is to monitor the process of the Xalalá dam, obtaining public information, sharing it with the affected people, representing the communities before national and international institutions, and taking preventative measures to ensure that human rights are respected.

Communities demand that the government respect their meeting results

On various occasions ACODET has requested information from the respective government offices regarding plans for the Xalalá dam. Their requests often receive no answer, and they have denounced this lack of information, communication, and consultation by the government before Congress. They specify that, from the early stages of the project, they have received neither official news nor an invitation to negotiate a common plan. As a result, they analyze the situation themselves, basing their understanding on independent studies and on information from other non-governmental organizations, media, and requests for information from corresponding public institutions.

The public forum, the meetings with state representatives, and informational meetings with human rights organizations were organized by the delegation in October in order to present the communities’ concerns and the problematic character of the new bidding process for the Xalalá dam in 2013.

The delegation presented their objections, signed by the 53 communities, demanding that the government: 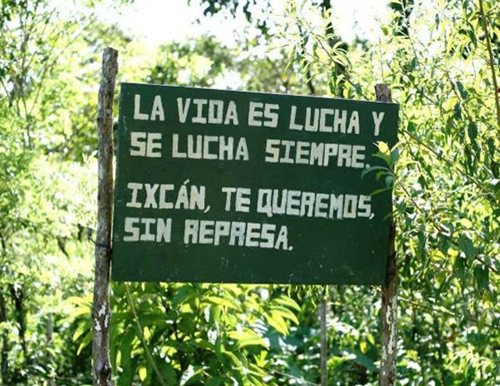 The delegation also called on national and international social organizations to be on alert for possible violations of the communities’ rights should the bidding process continue. They asked international groups to monitor the environmental impact caused by their companies in the name of “green” energy production.

Despite the demands and objections presented by the delegation, in November 2012 INDE requested that social organizations in the Ixcán help call the communities to meet and asked permission of the three municipalities to enter the area and begin work. In December, INDE continued calling meetings with local authorities and communities in the three municipalities and on December 27 2012 officially opened the process to contract a company that will conduct the geologic, geotechnical, seismic, and geophysical feasibility studies for the project.

[iv] CIFCA’s report (see previous footnote) explains the wide variety of land tenancy situations of communities in the area of the proposed Xalalá Dam. Since 1970, when the FTN Plan was being elaborated by General Arana Osorio’s government, the right to supplemental land titling was suspended the lands of the FTN and other designated “rural development.” The decree 60-70, which suspended this right, is still in effect, complicating the abilities of families that have inhabited these lands for decades to request titles. Some of the communities in the affected area inhabit lands owned by the municipality of Chinique and are in negotiations to purchase their lands. Others were internally displaced during the armed internal conflict and resettled in the area, with irrefutable titles to their land and protected by agreements with the Government of Guatemala negotiated during the peace process in the 1990s.

[v] In September of 2012, the Interamerican Court of Human Rights (IDH) condemned the Guatemalan State for having been the intellectual author responsible for the massacres committed by the army and civil defense patrols (PAC) in Rio Negro. INDE and the World Bank, the main promoters for the construction of the Chixoy Dam, have still not complied with the offers for compensation they made over thirty years ago to the more than thirty communities affected by the construction. Despite negotiations with the government, INDE, and the World Bank, the survivors of the massacre have not received reparations and the communities living next to the dam still do not have electricity. For more information, see the Jubilee Debt Report, “Generating Terror,” December 2012 http://www.jubileedebtcampaign.org.uk/Chixoy3720Dam3720film3720and3720links+8021.twl

[vi] Santiago Botón has produced a film (see link below) with some of these downstream communities, looking in more detail at these downstream impacts of hydroelectric dams. These communities were never included in the environmental impact assessments. Santiago Botón, 2012, Xalalá: Nuestra Tierra y Los Ríos No Tienen Precio (documental), http://www.youtube.com/watch?v=QUtq4BvpfDk&list=UUDdnK4l1IVvsdTZJBohb1FQ&index=4&feature=plcp

[ix] In Totonicapán, for example, where eight indigenous protesters were killed and over thirty wounded by the army on October 6, 2012, when thousands of people from the area were protesting raises in the price of electricity, the installation of hydroelectric dams, the politics of mining contained in the mining code reform, and and changes in requirements in the teaching profession. Locally, many of those communities in the municipality of Ixcán which have been electrified suffer frequent blackouts which cause damage to electric appliances.