On Thursday, July 12, 2018, Guatemalan activist Ángel Estuardo Quevedo, a member of the Peaceful Resistance in Casillas which demands the permanent closure of the Escobal silver mine, was murdered while traveling in the municipality of Santa Rosa de Lima. NISGUA joins the Xinka People’s Parliament in condemning his murder, expressing solidarity with his family, and calling for an immediate investigation. Read the Xinka People’s Parliament’s statement below in English and the original Spanish.

We the communities that form the Xinka People’s Parliament express our solidarity with the family of Mr. Ángel Estuardo Quevedo, who today in the municipality of Santa Rosa de Lima was the victim of a direct attack that ended his life.

[At the time of his death, Mr. Quevedo] was a participant in the peaceful resistance based in the municipality of Casillas and in front of the Constitutional Court, which demands the permanent closure of Minera San Rafael’s Escobal mining project. For the last year, he was criminalized for his participation in the resistance.

Moreover, we demand that the Public Prosecutor’s Office carry out a full and prompt investigation and that the law be applied to those responsible for such a despicable act, so that his death does not become just another statistic of so many attacks against activists in this country.

Voice of the Xinka Nation of Guatemala

NISGUA provides international human rights accompaniment to the Peaceful Resistance in Casillas through the ACOGUATE coalition and organizes internationally to support groups fighting against the imposition of the Escobal Mine, owned by U.S./Canadian Tahoe Resources. 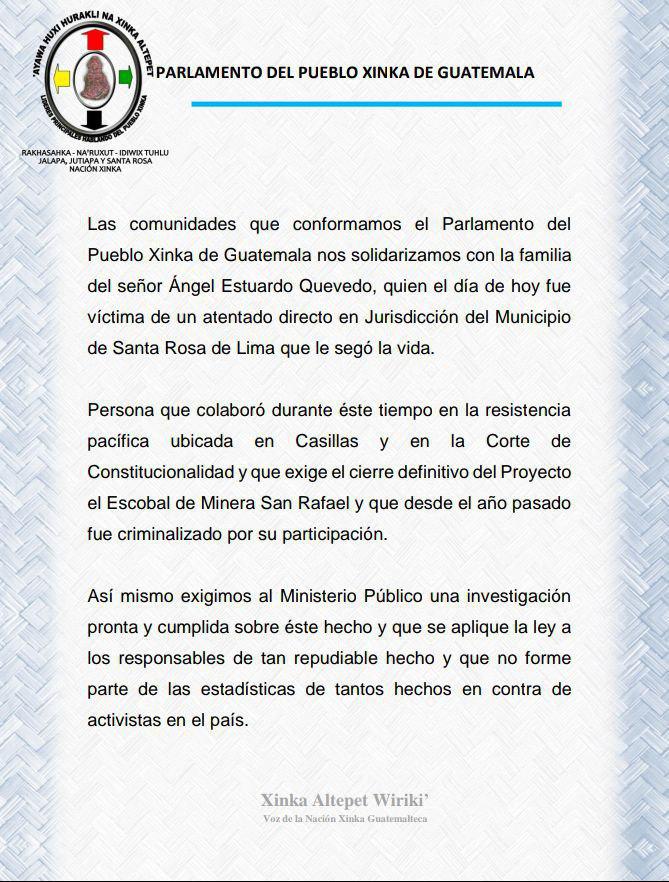