The time has come to support community resistance to the Escobal mine by echoing their voices internationally.
Take Action! Write Kevin McArthur, President of Tahoe Resources, to demand the company respect communities’ right to self-determination and leave Guatemala! 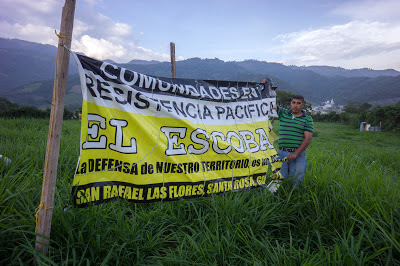 Since communities surrounding Tahoe Resource’s Escobal silver mine first organized community consultations against the project in 2011, NISGUA has closely followed and reported on ongoing resistance to the mine. During the past year, conflict around the mine site located in San Rafael las Flores in southeast Guatemala has intensified. For in-depth NISGUA analysis on community opposition to the Escobal mine and other movements in defense of territory, read our detailed report, Exercising rights: Communities defend territory.

In May 2013, a series of referenda on the future of the Escobal project in mine affected communities of San Rafael Las Flores was abruptly cut short when the government called for a state of siege in the region. The state of siege, just one step away from a state of war, undermined legitimate resistance and quashed the consultation process.

In the days following the declaration of the state of siege, former security manager for Tahoe Resources, Alberto Rotondo, was charged with ordering the April 27 attack that seriously wounded six community members. A report recently made public revealed that in mid-2012, Rotondo authored an incident report for Tahoe subsidiary, Minera San Rafael, that outlined a strategy to respond to community opposition through the criminalization of community and religious leaders.

In addition to expressing opposition to the project through community consultations, more than 200 individuals affected by the Escobal project filed legal complaints about the project with the Ministry of Energy and Mines (MEM). MEM dismissed all of the community complaints, clearing the path for the granting of Tahoe’s mining license. The complainants appealed MEM’s dismissal, and in July, a Guatemalan court ruled in their favor, a decision that partner groups believe should effectively suspended the company’s exploitation license. Despite these still unresolved questions, Tahoe has moved forward with production, reporting its first shipment of mineral concentrate on October 15.