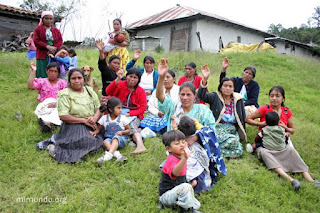 We need your support to help defend the rights of indigenous peoples affected by mining in Guatemala’s western highlands.

On April 26, Goldcorp will hold its Annual General Meeting (AGM) of shareholders in South Porcupine, Ontario.  During the meeting, shareholders will have the opportunity to vote on a resolution asking the company to ensure an adequate and fully funded closure plan for the Marlin mine and to consult with affected communities throughout the process.

Only shareholders can officially vote on the resolution, but we need you to take action today.  Please cast your symbolic vote in favor of the resolution by signing Amnesty International’s petition.

Let Goldcorp know that affected communities, advocates and people with indirect investments are also calling on the company to take full responsibility for recuperating the mine site.

Goldcorp’s Marlin Mine in Guatemala is one of the company’s most profitable gold mines, but the mine has been operating – and expanding – without the consent of indigenous peoples whose drinking water and farm lands may be affected.  Goldcorp pledges $28 million for mine closure costs, but has posted a mere $1 million financial guarantee. Respected, independent studies indicate the company has grossly underestimated the real costs of mine closure, which could be at least $49 million over many years.  The mine is expected to close in 2018.  Guatemalans shouldn’t pay to clean up Goldcorp’s mess.

Take a minute to urge mining company Goldcorp to act responsibly, and respect the rights of communities near the mine.

The shareholder resolution and the petition are supported by communities in Guatemala. The number of sign-ons will also be presented to the company and media at the time of the AGM.

NISGUA is working closely with our Guatemalan counterparts and our international coalition partners to plan events and actions for the week of Goldcorp’s annual meeting.

Thank you for your time and for standing in solidarity with the communities affected by the Marlin mine in Guatemala.

For more information on mining in Guatemala: