Posted on March 2, 2015 by ACOGUATE
Translation by NISGUA

Detained and awaiting trial since August 27, 2013, natural resource defenders Saúl Méndez and Antonio Rogelio Velásquez of Santa Cruz Barillas were recently sentenced to 33 years and four months in prison. They were found guilty of being accomplices in the August 2010 assassinations of one man and one woman, acts in which both leaders deny participating. Now, their lawyers have presented Special Appeals against the sentence, contending that there are flaws in the grounds of the sentence and the trial proceedings. These appeals will be heard in a public hearing on April 29, 2015 in Huehuetenango.

The two accused maintain that they are victims of the political persecution of the hydroelectric company Hidro Santa Cruz S.A., subsidiary of the Spanish Hidralia Energía S.A., for their commitment to the defense of territory and their roles in the Civil Society of Barillas. They were first incarcerated along with seven other people from May 2012 to January 2013 in the context of the social conflict generated by the hydroelectric projects Cambalam I y Cambalam II of Hidro Santa Cruz S.A. On this first occasion, they were accused of having participated in the disturbances associated with the assassination of community member Andrés Francisco Miguel, on May 1st of that year. Andrés was reportedly shot by the company’s security personal. (1) The UN Working Group on Arbitrary Detention determined in its Opinion 46/2012 (2) that these arrests were arbitrary, and for lack of proof, all nine people were finally released. 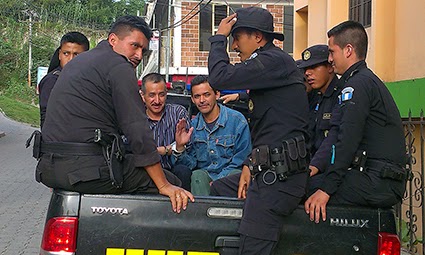 ACOGUATE has accompanied the Civil Society of Barillas since January 2013 and has observed the hearings in the case against Saúl Méndez and Rogelio Velásquez, while also accompanying Carlos Bezares of the Center for Legal Defense, the lawyer coordinating the defense of the accused in collaboration with Association CEIBA.

In his final statement in the November 14th hearing, Saúl Méndez declared: “The company Hidro Santa Cruz is what has been behind all of this.” Similarly, Rogelio Velásquez said that he is a prisoner “for defending natural resources.” Saúl Méndez also referred to one plaintiff witness, Wagner Roberto Mérida Reyes, as someone “who came to accuse us in 2012.” The aforementioned UN Opinion revealed that on May 2, 2012 Saúl Méndez and Rogelio Velásquez, along with a third person, were detained by unidentified members of the Reyes family, who drove them to the military base.  The wives of both prisoners claim that during the 2012 imprisonment of their husbands, people involved with the company threatened them saying that both leaders would be accused of the crimes for which they were recently convicted if they didn’t end their opposition to Hidro Santa Cruz, S.A. (3)

In the beginning of December 2014, the defense lawyers filed a Special Appeal against the condemnatory sentence, identifying ten procedural errors (defective proceedings during the trial) and five foundational errors (incongruent legal foundation), which in their opinion were committed throughout the process. (4)

The defense points to several procedural errors: “The accused submitted evidence after the investigation deadline. The Court also accepted testimonies as coherent, when in fact they were contradictory and not aligned with the description of the events as outlined in the factual report presented by the Public Prosecutor.” Among the foundational errors, the lawyers indicate that the Court confirmed the Public Prosecutor’s investigation to be insufficient. When indicating that the men collaborated in the crime, the Court did not establish a clear and precise means in which this collaboration occurred that would indicate complicity in a crime.

The Regional Tribunal of the Court of Appeals of the Department of Huehuetenango formally admitted the Special Appeal on December 18, 2014, and as such, the sentence will be reviewed. The Seventh Appeals Court of Huehuetenango will hold a public hearing on the Special Appeal  on April 29, 2015. The acceptance of the appeal for procedural errors would either lead to a repetition of the trial from the beginning or a new tribunal would be assigned to consider the new actions

[Special Appeal], while using the same evidence, witnesses and expert testimonies. The acceptance of the procedural complaint would mean that the Court would dictate a new sentence, complete with new legal grounds for the decision (without repeating the previous phases).

Support for the two sides

During some trial hearings, a group of about 20 women gathered at the court house wearing t-shirts with the message: “Justice for Guadalupe,” in reference to Guadalupe Francisco Felipe, one of the two people killed during the events being tried in the case. Throughout trial proceedings, members of the Departmental Assembly of Huehuetenango (ADH), members of the Civil Society of Barillas, and others of their own accord, affirmed the innocence of Saúl Méndez y Rogelio Velásquez and demanded their liberty, rejecting what they considered to be “criminalization for defending natural resources.”

As we wait for the Special Appeal process to be reviewed, the prisoners and their families continue to receive an outpouring of solidarity. Among these demonstrations was a Solidarity Festival for the Political Prisoners held on December 6 in the central park of Huehuetenango in support of the imprisoned leaders and their loved ones. The event included music and other artistic expressions that reflected solidarity. Those gathered included people defending natural resources through other struggles like community members from San José del Golfo and San Pedro Ayampuc, organized in the La Puya encampment against the imposition of the mining project El Tambor. They joined in the calls to demand the release of the two men from Barillas. (5) The event concluded with a visit to Saúl Méndez y Rogelio Velásquez in prison, bringing them candles and music as an act of solidarity. (6)

Together, since their second detention, Saúl Méndez and Rogelio Velásquez have spent one year and seven months in prison, while their wives and children – five in the case of Saúl and six in the case of Rogelio – have had to get by without the resources they provided as farmers. Rogelio Velásquez and his wife, Carmelia Sosa Mérida, also care for two of Carmelia’s brothers who were orphaned at a young age. Their economic situation will become even more difficult if the reparations payment approved on November 19, 2014, of 15,000 quetzales from each of the accused for the daughter of the victim, is upheld. This reparation is not applicable until the sentence is confirmed, that is to say, until the defense exhausts all of the available resources.

United Nations and the OMCT hear the case

The UN Special Rapporteur on the situation of human rights defenders, Michel Forst (France), carried out an unofficial visit to Guatemala at the end of January 2015. On January 27, he met with dozens of human rights defenders who gave testimony on the human rights violations taking place in Guatemala. Among the participants were Carmelia Sosa Mérida, the wife of Rogelio Velásquez, and Rubén Herrera, defender of natural resources and member of the ADH who told the Special Rapporteur about the case of Saúl Méndez and Rogelio Velásquez.

On February 26, 2015 the report, “Smaller than David: the struggle of human rights defenders [Más pequeños que David: la lucha de los defensores y defensoras de derechos humanos],” was presented in Huehuetenango. The report was written by the Observatory for the Protection of Human Rights Defenders (OBS) in collaboration with the Human Rights Defenders Unit of Guatemala (UDEFEGUA) during their international investigation mission in Guatemala in November 2013. The OBS is part of the World Organization against Torture (OMCT) and the International Federation for Human Rights (FIDH). Santa Cruz Barillas is one of the cases they are investigating in the report, paying special attention to the judicial process against Saúl Méndez y Rogelio Velásquez.
During the presentation of the report, Miguel Martín (OMCT) made reference to the pre-trial imprisonment of the other three leaders from the Barillas Civil Society, which had occurred on the same day. 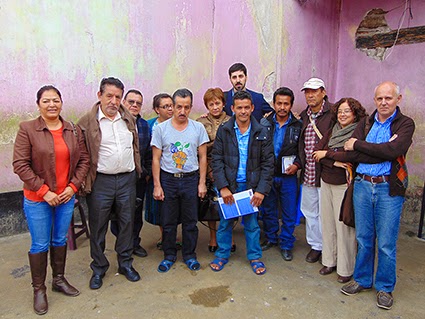 Since 2013, Hidro Santa Cruz S.A. employees have accused Francisco Juan Pedro, Adalberto Villatoro and Arturo Pablo of threats, instigating crime, illicit association, abduction, and kidnapping. Miguel Martín mentioned that these imprisonments are very serious and expressed his solidarity with the detained. He stated that being a human rights defender is “a risky activity in Guatemala” and demonstrated his concern for the “lack of guarantees to access to due process in the [Guatemalan] justice system.”

Representatives of the OBS, UDEFEGUA, ADH and individuals visited Saúl Méndez and Rogelio Velásquez and well as Francisco Juan Pedro, Adalberto Villatoro and Arturo Pablo, on February 27 in the Preventative Center for Men in Huehuetenango.