Skip to content
Previous Next
CLOSED: Solidarity with the Peaceful Resistance to the Escobal minenisgua_admin2021-04-08T16:35:06+00:00

On January 16, Guatemalan land defender Julio González Arango was shot. Like so many others in the resistance to the Escobal mine, our friend and comrade Julio has been threatened and attacked many times in the past decade. As a prominent Xinka leader in Mataquescuintla, Jalapa, Julio’s refusal to accept a mine that steals and poisons the water that he and his community need to survive has made him the victim of repeated violence. That morning, unknown assailants arrived at his home and tried to kill him. Julio continues to suffer from grave injuries. 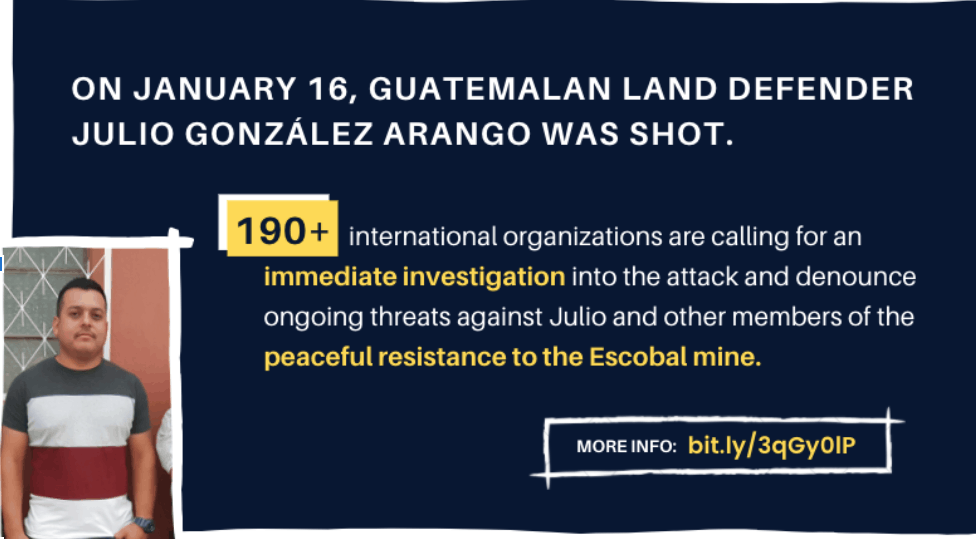 Graphic with a photo of Julio González Arango.

The following day, Mr. Juan Eduardo Donis and Mr. Pablo Adolfo Valenzuela Lima, two other members of the Peaceful Resistance to the mine who are also from Mataquescuintla, received text messages threatening their lives. The threats included an explicit reference to the attack on Mr. González and indicated that Mr. Donis and Mr. Valenzuela would be next.

These attacks are the culmination of an increasingly tense and dangerous context for members of the peaceful resistance and the Xinka Parliament of Guatemala, and we are working steadily to support them in this moment of crisis. So far, we’ve joined 195 organizations in condemning this violence, demanding a free and fair investigation, urging respect for the consultation with the Xinka people on the Escobal mine, and more.

As our comrades at Earthworks explain, “Pan American Silver [owner of the Escobal mine] is adding fuel to the fire by refusing to suspend local programs, which communities say heightens tensions and is a form of coercion in the ongoing consultation process. Their ongoing interference violates the court-ordered suspension and puts Xinka land defenders at greater risk.”

We are inviting our base to submit photos with a statement of solidarity. We will collect everyone’s submissions and create a collage, which we will send directly to members of the resistance. The deadline to submit a picture is Friday, March 12 at 5pm PST!