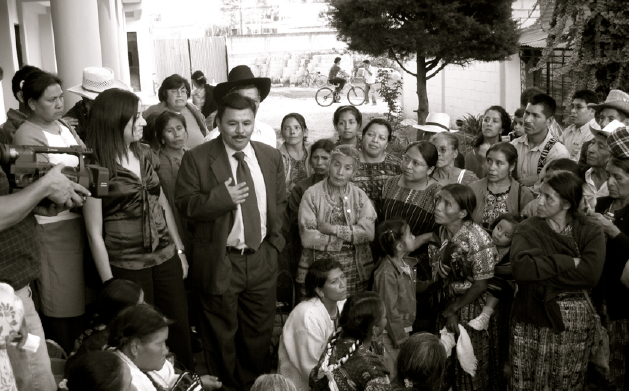 The victims committee meet with their lawyer, Edgar Pérez, in Choatalúm.

Making strides towards justice: Chipping away at Guatemala’s wall of impunity

In 2003, members of the community of Choatalúm dared to do the unthinkable: they publicly denounced then-mayor Felipe Cusanero Coj for his responsibility as military commissioner for the forced disappearances of six family members between 1982 and 1984. Forced disappearance, a kidnapping authorized by a State that refuses to provide information as to the individual’s whereabouts in order to keep him/her beyond both the law and his/her rights, creates a climate of terror and unending suffering for survivors who are denied information about their loved ones.

On August 31, 2009, the court sentenced Cusanero to 150 years in prison for his role in forcibly disappearing Santiago Sutuj, Alejo Culajay Ic, Lorenzo Avila, Filomena López Chajchaguin, Encarnación López López and Mario Augusto Tay. For the survivors in Choatalúm the sentence produced mixed emotions. Though Cusanero is now in prison, he refuses to provide any information as to the whereabouts of the disappeared. In the words of the survivors, “From the beginning, this is all we wanted.” Nevertheless, the verdict marks the first time a member of the military has been held accountable for crimes committed during the internal armed conflict, and thereby sets an important precedent for future prosecutions of forced disappearances.