As part of NISGUA’s 2016 tour, “Guatemalan women healing towards justice: the case of Sepur Zarco,” Bay Area organizers brought together community and clinical psychologists working in trauma and healing to discuss the connections between militarism and sexual violence and strategies for resilience and solidarity. The event, “Memory and Healing in Movements for Gender Justice,” was held on October 14 at the Intertribal Friendship House (IFH) in Oakland, one of the first urban American Indian community centers in the United States.

Maudi Tzay, a Kachiquel community psychologist and this year’s NISGUA 2016 tour speaker spoke about the role healing has played in the movement to support the women from Sepur Zarco, who survived sexual slavery at the hands of the Guatemalan military in the 1980s. 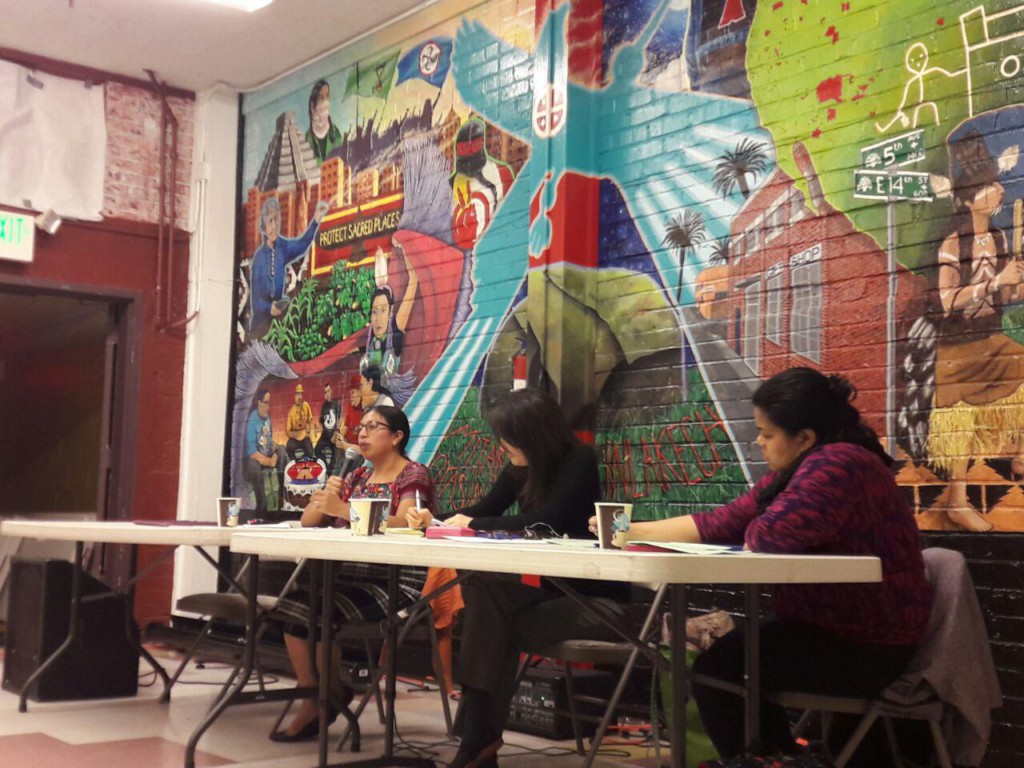 Maudi was joined by Lisa Nakamura, a clinical psychologist based in the Bay Area who has spent part of her career organizing pilgrimages to the Tulelake concentration camp as a process for healing trauma for Japanese-American internment survivors and their descendants. The panel was moderated by Sandy Panopio, from GABRIELA San Francisco, an international grassroots organization of Filipino women, trans and gender nonconforming peoples dedicated to “supporting and empowering Pin@ys through critical education, leadership development, and community building.”

For full speaker bios, see below.

During the panel, both Lisa and Maudi talked about the long-term impacts of sexual violence, the connections between racism and state violence against women, and the importance of justice – in the many ways it is understood – as a crucial pillar to healing. According to Lisa, “Sexual violence is a form of state-sanctioned oppression against women and girls, particularly in the midst of militarization. When systematic sexual violence takes place, it is debilitating and leaves intergenerational scars that necessitate long-term therapeutic support alongside work to change the system at the community and political level.”

Drawing connections between the sexual slavery suffered by the Q’eqchi women from Sepur Zarco in the 1980s and that faced by “comfort women” across Asia under Japanese military rule, Maudi said: “The women who have experienced the most atrocious gender-based violence, such as sexual slavery, have shown that to live in a democracy, one can’t remain in silence and [these crimes can’t remain in] impunity. The women from the Sepur Zarco case and the “comfort women” exemplify the need to understand historic memory and the realities that women are facing. They have opened roads to a world that is free from violence for women, teens, and girls. Justice through legal means is one of the ways that allows us to guarantee that these types of gender-based crimes are not repeated.”

Lisa reflected on the event and the importance of drawing connections between movements to end gender-based violence. “When trauma is more fully revealed and disclosed, it can allow women and their descendants to make important linkages and bonds with women from other communities,” she said. “This can be the silver lining when survivors can find resilience. They can find empathy and support that transcend race and nationality.”

“Seeing Maudi do long-term work in her community was simply inspiring, and yet, I can also appreciate how the work is nowhere near done. It was an honor to connect around the issue of the ‘comfort women’ struggle, the connection of sexually exploited minors in Oakland, with legacy of the Japanese American concentration camps, and with the indigenous community at the Intertribal Friendship House.”

The IFH was originally created as a community center in 1955 it, according to its website, “expanded into social services when staff became concerned about the lack of resources for American Indian people as they faced the challenges of relocation from reservations to urban communities such as Oakland due to the displacement from their native lands.” Today, the IFH continues to be held as one of the places that help urban Native people keep connected to their culture and traditions.

Every fall, NISGUA organizes a U.S. speaking tour featuring one of the resilient and inspiring organizations that we work with in Guatemala. Whether focusing on issues of justice and accountability or the defense of life and territory, our annual speaking tour aims to connect Guatemalan human rights defenders and the movements they represent with people across the U.S. who also struggle for self-determination, respect for the earth, and the liberation of their communities. For more reflections from the 2016 tour, visit our blog and see NISGUA’s recap moment on Twitter.

Maudi Tzay is a Kachiquel community psychologist from Guatemala whose work with ECAP – the Community-based Research and Psychosocial Action Team –brings healing to movements for social justice and human rights. Ms. Tzay has worked with communities affected by mining in San Marcos and El Estor, as well as Ixil survivors who testified against former dictator Efraín Ríos Montt in the 2013 trial that convicted him of genocide. Since 2014, she has provided psychosocial accompaniment to women from the community of Sepur Zarco, who survived state-sanctioned rape and sexual slavery in the 1980s under a U.S.-backed military dictatorship. Earlier this year, the survivors achieved a major legal victory when, for the first time in the Americas, sexual slavery was successfully prosecuted as a crime against humanity in a domestic court.

Ms. Tzay represents the Alliance to Break the Silence and End Impunity, the interdisciplinary feminist coalition behind the strategic litigation that made this an emblematic case in struggles for justice across the Americas. Maudi discussed her role as a community psychologist in bringing healing to women’s struggles for justice, and of the possibilities for healing that justice holds.

Lisa Nakamura, Psy.D., is a clinical psychologist based in the Bay Area. Dr. Nakamura’s dissertation examines how pilgrimages to Japanese American concentration camps impact former inmates and their descendants. She has years of experience organizing pilgrimages to Tulelake concentration camp as way of facilitating processes for healing trauma for internment survivors and their descendants. For seven years, she provided therapy and therapeutic collaborative psychological assessments with low-income children, youth, and young adults, including children in foster care and sexually exploited minors, at WestCoast Children’s Clinic in Oakland.

In 2015, Dr. Nakamura advocated for Japanese-American solidarity with Korean and Chinese survivors of sexual slavery under the Japanese military as San Francisco approved plans for a public “Comfort Women” Memorial. Lisa discussed the complex dynamics of support and opposition within the Japanese American community around the “Comfort Women” Memorial in San Francisco and the importance of solidarity between survivors of state violence.

GABRIELA San Francisco is a grassroots organization of Filipino women, trans and gender nonconforming peoples throughout the bay area dedicated to supporting and empowering Pin@ys through critical education, leadership development, and community building. GABRIELA is committed to taking up local and global struggles, immediate and long-term concerns of our communities.  As part of the Philippine women’s movement for self-determination, they are committed to working towards a future of real sisterhood, international solidarity, true gender equality and opportunity for all women, and genuine sovereignty and democracy in the homeland.