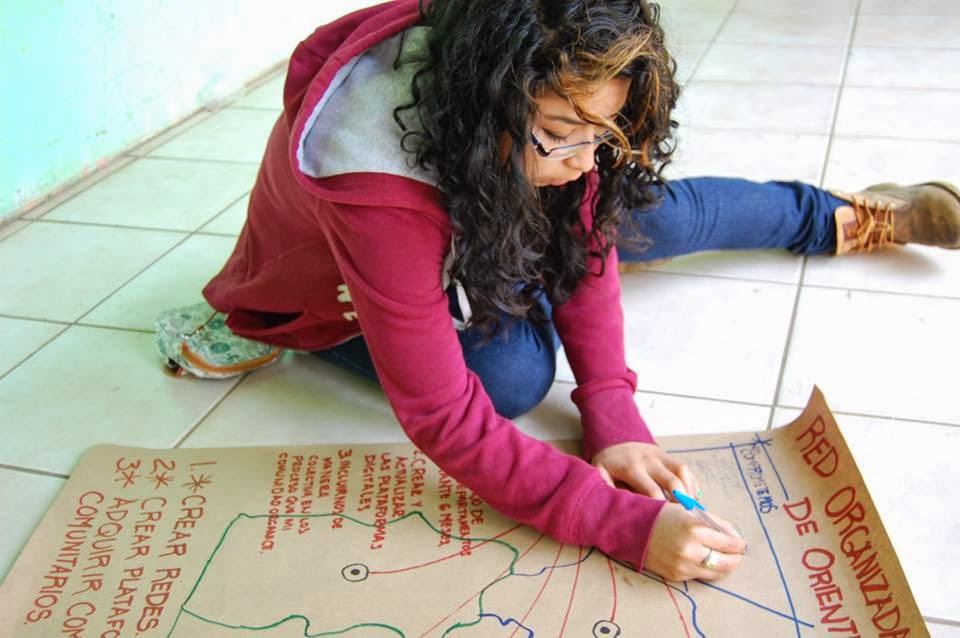 Two weeks have passed since the deadly attack against Alex and Topacio Reynoso, community leaders from Mataquescuintla, Jalapa who were actively opposed to Tahoe Resources’ Escobal mine in southeastern Guatemala. Topacio, just 16 years old, was killed, and her father was seriously injured. He remains in hospital in serious condition. NISGUA stands in solidarity with the Reynoso family and the thousands of other families demanding the right to self determination, who have suffered increasing violence, repression and criminalization since the 2010 arrival of the US and Canadian listed mining company, Tahoe Resources. Goldcorp holds 40% of Tahoe Resources’ shares. 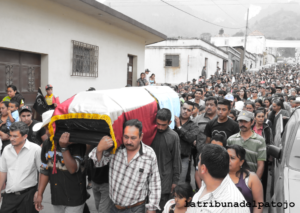 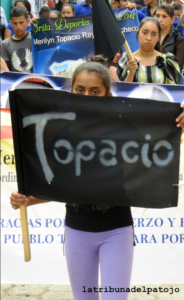 Classmates and friends made flags to carry during the funeral procession (Photo: latribunadelpatojo)

Today, NISGUA, together with 35 other international organizations, submitted a letter to Guatemalan authorities denouncing the attack and calling for justice.

Re: Armed attack against activists opposing Tahoe Resources’ Escobal Mine

The organizations that are signatories to this letter are deeply troubled by news of the April 13 armed attack against Edwin Alexander Reynoso and his 16-year-old daughter, Merilyn Topacio Reynoso Pacheco. We condemn this violent attack and call on your office to conduct a full and impartial investigation to ensure that that those responsible are brought to justice. We request that the investigation be transferred from the District Prosecutor of Jalapa to the of the Special Prosecutor’s Office on Human Rights.

Merilyn Topacio Reynoso was killed in the attack, and Alex Reynoso remains in intensive care having been shot four times. Both father and daughter are activists in the Peaceful Resistance in Defense of Natural Resources of Mataquescuintla, Jalapa, which has organized in resistance to Tahoe Resources’ Escobal mine in neighboring San Rafael las Flores. Goldcorp holds 40% of Tahoe Resources’ shares, and the Escobal project is operated locally by Tahoe’s subsidiary, Minera San Rafael.

The Reynoso family has been at the forefront of the region-wide struggle in defense of the right to free, prior and informed consent, self-determination and human rights since the arrival of Tahoe Resources to the southeastern departments of Jalapa and Santa Rosa in 2010. Topacio was a leader of the Mataquescuintla youth movement against mining and an active and well-known human rights defender. Her father, Alex, is a community leader and key representative of the Peaceful Resistance in Defense of Natural Resources of Mataquescuintla, recognized for his role in the organization of the community consultation.

In November 2012, the municipality of Mataquescuintla held the first municipal referenda in the department of Jalapa, joining three other municipalities in Santa Rosa that have said ‘no’ to mining in their territory. In December 2013, the Constitutional Court found in favour of the vote in Mataquescuintla, acknowledging the responsibility that municipal authorities have to convene such votes and to make decisions according to their results. This affirmed their value as the “adequate means by which peoples may exercise their right to give their opinion and be consulted on topics of interest.” To date, there have been 14 community referenda in municipalities, towns and villages surrounding the Escobal project.

Six kilometers from the Escobal mine, the residents of Mataquescuintla continue to oppose any development of Tahoe’s project. But instead of respect for their right to self-determination and their repeated expressions of opposition to the project, the communities and municipalities surrounding the mine have been met with multiple acts of violence, intimidation and repression:

Since 2011, more than 100 individuals involved in mine resistance have had unfounded legal charges filed against them.

On two occasions between March and May 2013, the police violently evicted a peaceful, legitimate and legally located encampment outside the mine.

In April 2013, Tahoe security guards attacked six peaceful protesters outside the mine; one was critically injured. Former head of security for Tahoe Resources, Alberto Rotondo, is under arrest awaiting trial for allegedly ordering the attack. He is facing charges for bodily harm and obstruction of justice.

In May 2013, President Otto Pérez Molina declared a state of siege in four municipalities surrounding Tahoe’s project, including Mataquescuintla.

We are very concerned with the ongoing violence and persecution of human rights defenders and community leaders who oppose Tahoe’s mine project. It is important that the killing of Topacio Reynoso and the attack against Alex Reynoso not remain in impunity. We call for a full and impartial investigation by the Special Prosecutor’s Office on Human Rights in order to ensure justice and to prevent further violence in the region. We also request that the investigation be transferred from the District Prosecutor of Jalapa to the of the Special Prosecutor’s Office on Human Rights. We understand that Alex Reynoso is receiving police protection while he recovers from the attack. We call on the Ministry of the Interior to continue to coordinate with the Human Rights Ombudsmen Office to ensure the safety of Alex Reynoso and his family.

Many of the organizations that have signed this letter have deep and lasting relationships and/or commitments with the groups opposing Tahoe’s mine. Many have recently visited the affected communities to meet with local leaders and human rights defenders. We recognize that violence, which occurs with disturbing frequency in and around mine sites in Guatemala, is also a serious global issue. Many of the below signatories are currently engaged in the “Open for Justice” campaign, which is calling for legislated access to justice in Canadian Courts for people who have been harmed by the international operations of Canadian companies.

We appreciate your time and consideration of this appeal and look forward to your response.

Network in Solidarity with the People of Guatemala (NISGUA) – USA

Minister of Energy and Mines

General Director of Mining, Ministry of Energy and Mines

Ministry of the Interior

NISGUA has accompanied communities in opposition to the Tahoe Resources Escobal mine since 2011.