Dam-Affected Communities Speak Out for Free, Prior, Informed Consent 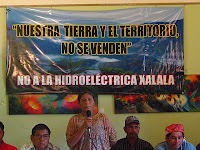 “We, the communities, want a development with dignity and justice, with harmony and respect for Mother Earth.”

[i]
Representatives from affected communities traveled to Guatemala City on September 30, 2010 to present their concerns and demands regarding the planned construction or inauguration of a number of large-scale hydroelectric projects throughout Guatemala.
In a press conference, members of two community-based organizations, the Association of Communities for the Defense of Land and Natural Resources (Asociación de Comunidades por la Defensa de la Tierra y los Recursos Naturales, ACODET) and the Guatemalan Coalition of those Threatened and Affected by Hydroelectric Dams for the Defense of Water (Frente Guatemalteco de Amenazados y Afectados por Hidroeléctricas y en Defensa del Agua, FGAARDA), presented on the possible effects that a number of dams, including San Luis, Palo Viejo and Xalalá, could have on communities and regional biodiversity.
The Xalalá dam, for instance, could directly affect more than 50 indigenous Q’eqchi communities and indirectly affect 44 more. The governmental National Electrification Institute (Instituto Nacional de Electrificación, INDE) plans to construct the dam, which would be the second-largest in the country, at the confluence of the Xalalá and Copón Rivers.
Hydroelectric energy currently accounts for approximately 1/3 of the energy produced in Guatemala.[ii] The Chixoy dam, the largest in the country, produces approximately 15% of the total energy generated nationally.[iii]
[Photo: James Rodriguez, mimundo.org]

The Chixoy dam has a violent history, of which those confronting the other dams are painfully aware. Construction of the Chixoy dam began in the late 1970s, just as the army was beginning to focus on rural areas in the internal armed conflict. The affected communities were opposed to its construction, but the government harshly repressed opposition of any kind. Between 1980 and 1982, as many as 5,000 people were murdered in what is known as the Rio Negro massacres.[iv] Additionally, 3,500 people were violently evicted without adequate relocation or plans for compensation.[v]
For communities organizing against destructive development projects today, such as the Xalalá dam, the memory of Rio Negro is a terrifying reality. Communities across Guatemala have faced threats and intimidation from government officials and company representatives when they voice their opposition to mega-projects like dams, mines, and oil drilling. The eight-member panel declared Thursday, “Today they want to silence us again, with fear, intimidation, violence and control. We say to them… today we know what our rights are and we won’t return to the genocide provoked by the ambitions of the largest corporations.”[vi]
Many communities in the regions affected by hydroelectric dams have voiced their opposition to the projects through community referendums (consultas comunitarias), in which the issues are submitted to a vote. ILO Convention 169 states that indigenous peoples have a right to be consulted before governments undertake development projects in indigenous territories, but Guatemalan courts have declared that the community consultas that are taking place are legal forms of expression that are non-binding. In a 2007 consulta in the Ixcán, 89% of participants voted against dams and oil drilling carried out without community consent.

The representatives of the communities to be affected by the Xalalá dam presented a list of demands, including that the construction of the Xalalá dam be abandoned, that the consultas be recognized and respected, that studies undertaken by the government to assess the effects of development projects be objective, and that development projects undertaken by the government be sustainable. To the Guatemalan people, they posed the question, “Why do we have to sacrifice our lands and the lives of our communities, which are the most marginalized in the country, to satisfy the demands of the market and the excessive consumption of the wealthiest?”[vii]

On September 30, the leaders of ACODET and FGAARDA also met with the Ministry of Energy and Mining and the Ministry of the Environment and Natural Resources to present a report detailing their position signed by 2,158 people from affected communities. “We are coming here to tell them that our land is not for sale and that before they complete any work or plan for development they should first obtain the free, prior, informed consent of our communities,” they stated in a press bulletin about their visit.
Although representatives of INDE were asked to attend the meeting, not a single official of the state-owned corporation was present to hear the testimony and demands of communities affected by hydroelectric dam projects like the proposed Xalalá dam.
Sources:
[ii] Press Bulletin. ACODET and FGAARDA. 30 Sep 2010.
[ii] Carmen Reina. Presenter. 30 Sep 2010
[iii] “Mapas Hidroeléctricas 2009.” Ministerio de Energía y Minería.
[iv] ADIVIMA (Asociación para el Desarrollo Integral de las Víctimas de la Violencia en las Verapaces, Maya Achí).
[v] Johnston, Barbara Rose. “Chixoy Dam Legacy Issues Study,” AAAS Science and Human Rights Program,
[vi] Press Bulletin. ACODET and FGAARDA. 30 Sep 2010.
[vii] Press Bulletin. ACODET and FGAARDA. 30 Sep 2010.
nisgua_admin2020-01-01T21:19:50+00:00November 2nd, 2010|Defense of life and territory|