In the last few weeks, protests are growing in Guatemala due to the mismanagement of the pandemic and the lack of an appropriate state response to hurricanes Eta and Iota, the outrageous 2021 budget, and the systematic corruption and impunity of the ruling class. Therefore,  human rights organizations and social movements are calling for the immediate resignation of the president and vice president. The state’s response has been increased police repression and militarization, as well as the defamation of protesters, particularly on November 21 when a peaceful demonstrations in Guatemala City, Xela and Huehuetenango were heavily repressed.

We share with you the statement, from our partner CALDH, pointing out the dangers of returning to old authoritarian patterns and reaffirming the right to civic protest.

On Saturday, November 21, 2020, throughout the afternoon and evening, there were moments of tension when a peaceful demonstration led by a population tired of this government, its deputies, and the oligarchy, was overshadowed by an excessive, ‘80s-style attack from security forces of the National Civil Police (Policia Nacional Civil, PNC).

The brutal repression experienced by demonstrators, students, activists, and journalists left people injured, wounded, and hospitalized. There were 38 people detained illegally, including minors and women, who were dragged by PNC officers using excessive force, without complying with international protocols and human rights standards for the treatment of detained women. All of this happened within the context of an injunction presented by the Human Rights Ombudsman (Procuraduría de Derechos Humanos, PDH) and granted by the Constitutional Court in order to guarantee the respect of citizens’ freedom of association, assembly, and peaceful demonstration consecrated in the Political Constitution of the Republic.

It is evident that Alejandro Giammattei’s government has taken us back to the times of the Internal Armed Conflict when social protest was silenced with this type of abuse, throwing tear gas canisters, directly shooting at people with rubber bullets, and using water cannons to disperse thousands of demonstrators that were in the Constitution Plaza and the surrounding areas. This abuse and repression by authorities also happened in other parts of the country, such as Huehuetenango and Quetzaltenango, where thousands of people came out to demonstrate.

In the face of these ABUSES and ATTACKS we demand:

The removal of the Minister of the Interior and the director of the PNC for their responsibility in the acts of repression against demonstrators.

That the Public Prosecutor officially start criminal investigations against those who gave the orders for this unnecessary repression and against everyone who executed those orders.

That the Supreme Court of Justice, through its judges, immediately releases the people who were arbitrarily detained, respecting constitutional principles and international standards of human rights.

That the PDH, within its capacity as Defender of the People, carries out a Social Audit and maintains constant observation of these processes.

That the International Community, within its capacity as observer, guarantees the respect of the fundamental rights of all citizens.

That the people of Guatemala do not keep quiet about these abuses, that they publicly denounce this repression by the government, and that they continue to protest and demonstrate, which is our constitutional right.

For the Right to a Just Country!

Read the statement in Spanish 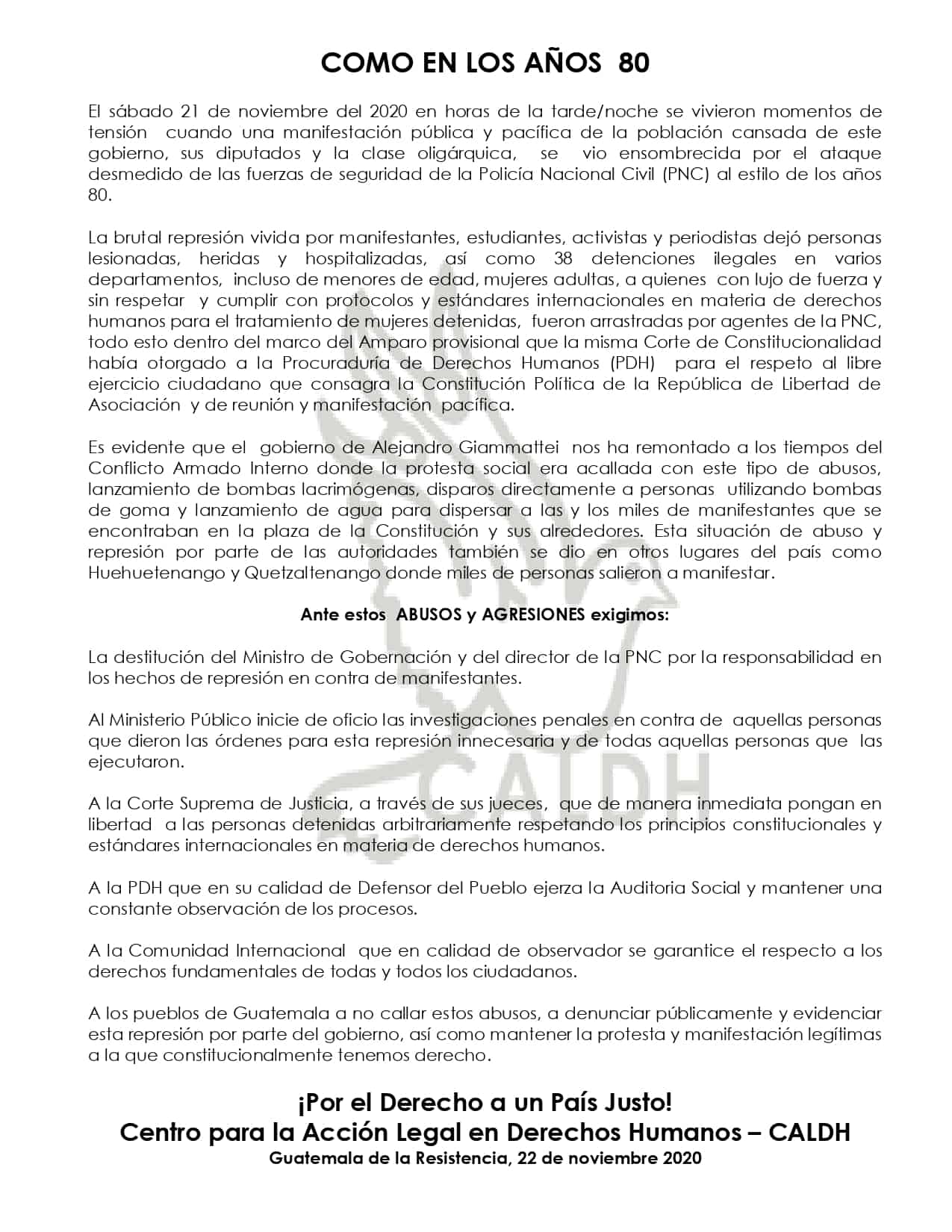