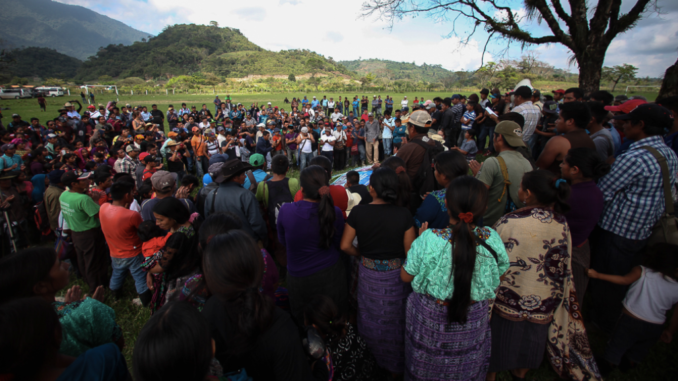 On March 4, 2019, the Ancestral Plurinational Government of the Akateo, Chuj, Popti, and Q’anjob’al Original Nations released a statement expressing their outrage regarding a recent violent incident. The violence was committed against Plurinational Government delegate, Julio Gómez, his driver, and members of his family. According to the statement, Mr. Gómez was contracted to transport a load of lumber to a community in San Mateo Ixtatán in Northern Huehuetenango. Upon arrival, Mr. Gómez and his driver were accused of illegal logging and subjected to physical and psychological abuse by local authorities.

The men were forcefully taken to a community center, where the accusations against them shifted from illegal logging to the Mr. Gómez’s involvement with the Peaceful Resistance of Ixquisis. Mr. Gómez’s captors threatened to kill him unless he paid a ransom. His family arrived shortly after to pay for his freedom when they were subjected to physical violence and threats, including the sexual assault of a woman in the group. After paying approximately $7,700 USD, the group was allowed to leave 13 hours after Mr. Gómez and his driver were kidnapped and five hours after his family arrived.

In January 2017, Sebastián Alonso Juan, an elder from the Ixquisis region, was shot and killed during a peaceful protest after local police and hydroelectric dam private security forces opened fire against protesters, according to witnesses. The perpetrators of his murder have never been brought to justice. On December 16, 2018, two more members of the Resistance were murdered during a period of time in which human rights organizations reported increased defamation and aggression against the Peaceful Resistance and the local population.

Just last week, the Inter-American Bank’s (IADB) Independent Consultation and Investigation Mechanism (MICI) found the complaint filed by the Plurinational Government on behalf of the Ixquisis communities admissible. The IADB is one of three multilateral development banks financing the hydroelectric project. The complaint highlights social and environmental damages caused by the project and requests the investigation and withdrawal of the IADB’s investment due to non-compliance with the bank’s own operating policies.

In light of this most recent attack, the Plurinational Government calls for a full investigation into the incident, the immediate cancellation of the hydroelectric dam project and the withdrawal of all multilateral development bank financing from Energía y Renovación.