Community members from La Cuchilla in the municipality of San Rafael las Flores are concerned about major cracks in the foundation of their houses that have developed since Tahoe Resources’ began mining operations at the neighboring Escobal mine. They claim that the cracks are due to explosions and an increase in heavy truck traffic due to mining operations. NISGUA has provided international accompaniment and advocacy support to communities impacted by Tahoe Resources’ Escobal mine for several years. Follow #TahoeOnTrial on Twitter for more information about community resistance to the mine and stay tuned for more information on the community’s relocation.

The following press release was issued by the Reparations Committee of La Cuchilla and was translated and edited for clarity by NISGUA. For the original statement in Spanish, see below.

Information Circular for the Communities of San Rafael las Flores

On Wednesday, October 19, 2016, a high-level meeting was held with Congressional representatives from the Commission of Energy and Mines, the President of the Congressional Commission for Reparations, delegates from CONRED, INSIVUMEH, the Vice Minister of Energy and Mines, representatives of Minera San Rafael, and community members from La Cuchilla. During the meeting, the following findings by Congressman Erick Lainfiesta (Encuentro por Guatemala) and Tomas Códova (Líder) were discussed:

Minera San Rafael hides the truth from neighboring communities, claiming that they are planning on building an ecological park in the community of La Cuchilla. Given the fact that CONRED has declared this zone uninhabitable, this claim is absurd.

[The company] shows little interest in respecting the private property of the residents of La Cuchilla, or improving their quality of life. We ask the general public to not believe these baseless lies. We have testimonies and proof that reveal these absurd lies for what they are – spoken by mine managers who do not think about the development of the people, but only in personal interests. We declare that Guillermo Monroy and Javier Fortin – both of whom are liars and detrimental to our community – are not welcome in our municipality.

We call on the workers to defend their rights. We take no issue with any of them and ask them to denounce to this committee any kind of intimidation by managers at Minera San Rafael. The people from the community of La Cuchilla only ask that their lives and private property be respected; through no fault of their own, and because of the irresponsibility of the company, they find that their lands are no longer worth anything and need to leave under unfavorable conditions. The public should not forget that natural resources belong to the State and the States conforms to the will of the people.

The Reparations Committee of the Community of La Cuchilla, in light of the damages and harm caused by the company Minera San Rafael. 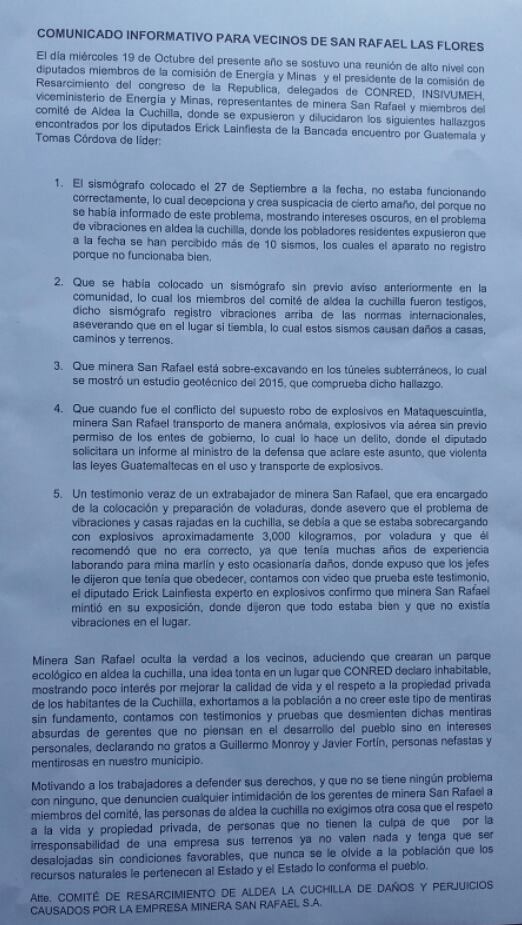